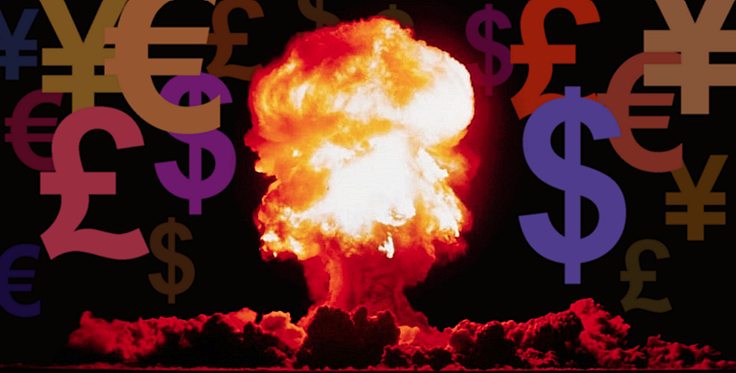 Earlier this afternoon there was a discussion on Skype about this post at American Partisan quoting Egon von Greyerz concerning the imminent meltdown of the global financial system.

Below are excerpts from my exchange with one of the translators:

Translator: What can we do when the whole shebang collapses? Governments all over the world are already prohibiting people from buying gold and silver above a certain amount, and then that has to be declared so that they can come afterwards and take it away by force. What will happen to people who own their properties outright? Will these be taken along with those that borrowed from banks? I hope that NOBODY will sell any food to the rich afterwards. Let them eat their money.

Baron: It all depends on who is holding the AK-47s when the time comes. Those will be the ones who “own” whatever they want to claim.

As for selling stuff — what will people use to buy it with? Our assumption is that there will have been a financial collapse, and that the old currencies will be worthless. There will be barter, and there will eventually be a new currency based on something of real value. Probably multiple privately-issued currencies. Those currencies that reliably back up their scrip with gold or silver will become the new dominant media of exchange.

But there will also be a lot of starvation and violence, especially in the big cities.

T: I wonder how much longer we still have?

B: That’s a good question. Lots of people said the end was near back in 2008 and 2009, so we’ve already gotten an additional thirteen years for free.

I no longer make any predictions. The Powers That Be have shown that they can keep the bubble of imaginary money inflated for an indefinite amount of time. It can’t last forever, but I have no idea when the real crash will occur.

T: The South Sea Bubble also burst, despite the British and other European governments trying to keep it going.

B: Yes. This is just the biggest such bubble ever inflated. The first truly global one.

T: Although I’m not so sure how that affected the peasantry at that time, because they could still feed themselves, unlike their modern counterparts who have been made dependent on supermarkets.

As far as I remember, in France the rich exchanged most of the “paper money” for gold and silver before the big crash, and shipped it out of France into Switzerland. Nothing changes, now, does it?

B: People like Soros will know exactly when to cash in their paper gold and take delivery, while the price is still set artificially low. After that the price will skyrocket, and there will be a mad rush to take delivery of physical gold. Then the supplies will be exhausted — after less than 10% of the paper has been exchanged — leaving the rest of the metals-traders holding worthless promises to deliver.

It will be like financial musical chairs: when the music stops, those who are left standing with their paper gold and silver will be ruined, while the ones who sat down early will have their metals.

That will be part of the systemic collapse. The question is: can all that gold help keep Soros and his ilk alive? I mean, they can pay their mercenary guards with their gold, but what’s to prevent the most ruthless and capable of the mercenaries from eliminating the middleman and appropriating all the gold for themselves?

I think the plan to hide out in the luxury bunker in New Zealand is just wishful thinking. It all depends on the assumption that people who lack all strength and martial skills will retain their power to command others. I just can’t see that happening, once the general support structure of civil society has collapsed. It will be the age of the new warlords: harsh, hardened, brutal ruthless men who dispatch their rivals themselves, personally.

Soros, Schwab, Gates, Harari, etc. lack those characteristics. Their reign will be brief.

It goes without saying that all of the above may be suddenly foreclosed if those itchy neocon fingers ever actually pull the nuclear trigger in Ukraine or elsewhere.

25 thoughts on “When the Music Stops”