A winter of discontent lies ahead for Western Europe, not least in The Netherlands. Our Dutch correspondent H. Numan sends a report on King Willem-Alexander’s speech on Prinjesdag. 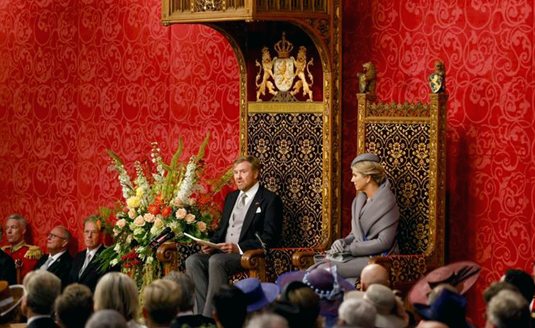 The Dutch State of the Union

Every third Tuesday of September we Dutch have our State of the Union: Prinjesdag (literally: Day of the little princes). It’s an official holiday for the city of The Hague, where the ceremony takes place. It’s as big as it gets ceremonially in The Netherlands. The king climbs into the Golden Coach, to be driven to the Hall of Knights on the Binnenhof (Inner Court). Troops in ceremonial dress uniforms line the streets and the square on the Binnenhof. That hasn’t happened the last couple of years, due to Covid-19. This year the circus was back, but moved to the Koninklijke Schouwburg (Royal Theater) because of renovations on the Binnenhof. Boy, what a circus it was!

Of course the police were, and should be, out in force. It’s the biggest event of the year, and a prime target for demonstrators. Farmers were not allowed in the city with their tractors, which is understandable. The police needn’t have bothered. The streets were lined with loads of people holding the flag upside down. The royal procession was not cheered but jeered on the way to the Binnenhof. Even worse, after the ceremonial tour back to his palace, the king appeared on the balcony where he was jeered and booed.

This is pretty much unique. I’ve never seen this happen before. Do mind that this annual event is old, and carefully managed. The streets are always lined by people ‘from the country’ bussed in by their local orange societies. In other words: the streets are always lined with royalists. However, the orange societies made a mistake. The very same mistake our (and your!) elites are making. They themselves are fairly well-off, and don’t really care about anyone else.

Those — usually — reliable royalists are mostly farmers. Or at least from rural communities. The government made it very clear that they want to abolish the entire agricultural industry. Of course they couldn’t bring in their tractors to the city, but they did bring their flags. Upside down. Something the organizers obviously forgot.

The king being booed is unheard of. The last king before him was King William III, nicknamed King Gorilla. He was thoroughly disliked, for good reasons. He was as randy as a male gorilla in heat; he literally humped everything. He also liked to show his crown jewels to the public in Montreux. Something one did not expect from a monarch in the 1880’s. At least, not so openly. He was also disliked for his cruelty and sadism, even within the palace. He took real pleasure in humiliating his staff. His successor was queen Emma, followed by Wilhelmina, who both restored the favorable image of the royal family. Otherwise he would have been the last king. His predecessors weren’t liked, either.

Okay, back to king William Alexander, or William the Last, as I prefer to call him. He has a remarkable gift for gaffes and inherited the gift of empathy and managing people from his great-grandfather. He’s a fairly decent man otherwise. No scandals. Just immensely embarrassing gaffes.

For example, the government had to recall him immediately after the first lockdowns were announced. The king had simply ignored them and went to Greece for a holiday. He owns a palace there, and a very recently purchased $$$$$ yacht. That caused a public outcry. So much so that within 24 hours the government ordered him back, and to make a public apology on national TV. It was nothing personal, mind you. He just doesn’t give a f**k what commoners (anyone making less than 25 million) think. He could consider himself lucky that he was only being booed on the balcony. Had the crowd known what he had arranged for himself, he’d be treated to eggs and tomatoes!

The State of the Union was the usual bunch of lies. The king reads aloud what the government plans to do the coming year. It was not pretty. Everybody — as usual — has to tighten their belts. It’s the economy, you know. We can’t help it. However, the government did find enough money to reward our excellent monarch with an extra half-million euros annually. And it announced it had to prioritize something. That something is climate change and refugees. Not your silly insignificant little problems. Yes, it’s them international treaties. Nothing we can do about it.

That’s socialism in a nutshell for you. The people who shouted from the ’60s until now: jullie rechtsstaat is de onze niet! (Your laws aren’t our laws!) think that their laws are chiseled in stone tablets. When they pass a law, it’s forever.

That was the ceremonial circus. The political circus happens immediately afterwards, when the government has to defend its plans in parliament. Here another first happened: the entire government walked out of the debate! That has never happened before.

Thierry Baudet is somewhat of a loose projectile in Dutch politics. He was warmly applauded as the new Geert Wilders, but more polite and eloquent. It did cost the PVV a lot of seats, exactly what our elites wanted. However, after he clipped the PVV he didn’t go away. Even worse, his party (FvD) grew. Fortunately, Baudet proved to be a conspiracy theorist. So it’s very easy to debunk him. Let me put it differently: I do agree with most of his conspiracies, but can’t an eloquent and cultured man, as he professes to be, put it in less conspiratorial terms?

He’s still there, and this time he talked about the vice premier, Mrs. Sigrid Al-Qaq (Kaag). He mentioned her education in Oxford, where she attended the same colleges as famous spies of the past did. He began to talk about the WEF (World Economic Forum) and Mrs. Al-Qaq’s relationship with it, when the aforementioned Mrs. Al-Qaq walked out. Followed by the entire cabinet.

The chairman forbade him to speak any further, and turned off his microphone. However, it was pointed out to her that this was highly undemocratic by Geert Wilders and the SGP (theocratic Calvinist party). After that intermezzo, she recalled the cabinet to continue the debate.

I see this as a Streisand effect. Geert Wilders has been called much, much worse. He takes it on the chin, and usually returns the favor with interest. That’s how politics works. By walking out she focused attention on something she clearly doesn’t want to talk about: her relationship with the WEF.

Personally, I think Mrs. Al-Qaq is the most rotten in a barrel full of rotten apples. A real danger to our national security, but for other reasons. She married without the permission of the ministry a high-ranking PLO officer, Mr. Al-Qaq. He was their foreign affairs minister. You can marry anyone you want as a janitor or a lowly clerk, but if you hold a senior position that is not the case. So she had to resign, which she did. After that she went into politics and the rest is history. She doesn’t care about anyone but herself. A kind of Dutch Megan Markle: anything she wants, she gets. If it is against the rules, change, bend or ignore the rules.

Marrying a top PLO officer comes with obligations. It simply is unthinkable such a person would marry a Christian or atheist. Not a peep from the Middle East. That means she must be muslim. Not a dhimmi, but a real convert. However, she operates under her maiden name, Sigrid Kaag, not as Sigrid Al-Qaq. That means she really tries to pretend not to be a muslim. I think both Baudet and Geert Wilders should focus on that marriage if they want to damage her.

Back to the State of the Union and the (sad) state of the nation. About 25% of the population is staring at real poverty. Of course the government should have announced measures to relieve their suffering, but… they make a lot of money by postponing it. The longer they postpone, the more they make. You see, the gas rates (that’s where it hurts the most) in The Netherlands are the highest in Europe, by a fair margin even. Belgians buy Dutch gas for half the price. That does not sit well with the general public.

Reducing those taxes the government levies would ease the pain, but why would they? In their distorted minds this is perfect! Mrs. Al-Qaq and her minister of energy, Rob Jetten, said so literally. The higher energy prices are, the sooner people will transition to green energy. They even went as far as to say they have no intention at all of lowering the prices. Yes, they want to help the poor, but not this year. Perhaps next year, certainly after the winter. Even then, they only want to give a pittance.

It looks like 1792 all over again. People didn’t start revolting because they felt like it. Common people rarely, if ever, can do that. They revolted simply because they didn’t have any other option. It was either to revolt and possibly die during the revolution or starve to death for certain. It’s not that grim yet, but we’re getting there.

What those elites completely forget or simply ignore is that they only rule as long as enough of the uncouth unwashed poor vote for them. In every society only a tiny fraction rules. In Holland, that group is fewer than 150,000. Including anyone who really matters, from the king down to the lowest village level. The other 17,850,000 are there to vote for them.

I doubt very much that this cabinet will survive the beginning of winter, let alone see spring. They have lied too many times, especially prime minister Rutte. Those lies have changed in utter disdain for the common man. It’s not just the farmers who are facing oblivion; now it’s everybody. Never mind the 150,000 who make the rules, and a million or better supporters. It’s the 4.5 million who face real disaster, and likely the same number who barely manage. 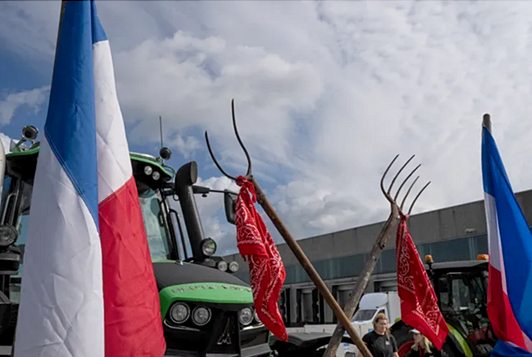 Another thing that won’t help: I think the coming winter will be very cold. One for the records. With possibly an Eleven City Tour. Why? No idea, but looking back to history I notice the weather is usually inclement when you need it the least. The last thing anyone wants right now is a severe winter. During World War 2 we had no less than three of them in a row (1940, 1941, 1942).

We’ll have to see how things work out, but don’t be optimistic.

5 thoughts on “The Dutch State of the Union”