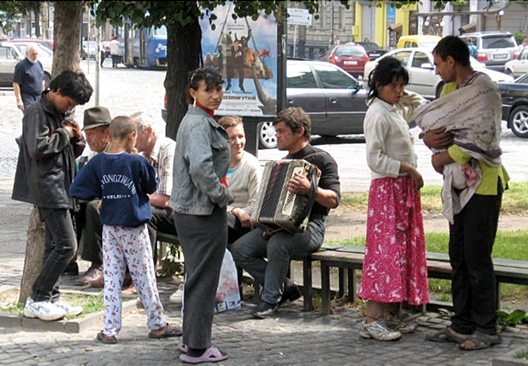 Many thanks to Hellequin GB for translating this article from Der Wochenblick. The translator’s comments are in square brackets:

An urgent letter from the President of the Thuringian district council, Martina Schweinsburg (CDU), to Thuringian Minister-President Bodo Ramelow (The Left) caused a stir this week: the municipal association politician warned bluntly of an impending collapse in the accommodation of Ukrainian refugees: Contrary to public appeasement and trivialization explanations, the actual possibilities of the districts are exhausted: “Our capacities are exhausted. We have our backs to the wall!”

In an interview with the Frankfurter Allgemeine Zeitung (FAZ), Schweinsburg explained that, above all, large Roma families from Ukraine’s border areas with Hungary and Romania are arriving in increasing numbers at the initial reception facility, and for whom there are no suitable apartments in the districts. According to the president of the district assembly, however, accommodation in school gymnasiums cannot be a permanent solution; it is also viewed increasingly critically by the population or is no longer accepted.

In the process of dissolution

The explosive statements show that there is now no longer an area in which the ever-expanding and all-competent German state is not in the process of dissolving or is on the verge of being unable to act, because of the burdens it has shouldered. This is also and especially evident in the insane migration policy: although since 2015, in the wake of Angela Merkel’s welcoming frenzy, mass immigration has been initiated without any need or cause (although hardly any of the arrivals have the slightest right to stay in Germany ), since then there has been no rethinking. On the contrary: even before the Corona crisis, German municipalities declared themselves to be “safe havens” and indulged in the slogan “We have space.” And when Russia invaded Ukraine, Germany’s promises of aid and its declarations of unconditional willingness to accept refugees had already been made before the first tank shell was fired.

How much “space” Germany still has is now becoming apparent, as the shortages resulting from the energy crisis are also spreading in other areas: the authorities are increasingly unable to accommodate the refugees from Ukraine — even those who are real refugees, and are not arriving fraudulently on the war refugee ticket. This is no different in Thuringia than anywhere else in the republic.

Initially, according to Schweinsburg, it was mainly mothers with children and grandparents who came. There have not yet been any problems here, “on the contrary, there has been broad acceptance and a great willingness to help”. In the meantime, however, Sinti and Roma in particular (whether they actually come from Ukraine remains to be seen) arrive in entire clans. The accommodation of these extended families is now overwhelming all 17 districts and the five urban districts in Thuringia. A single family has about 84 (!) members; in her own district, reports Schweinsburg, the largest family has 48 members — including 37 children and adolescents and a pregnant 15-year-old. [The crime rate must be going through the roof now.]

The accommodation, which had previously been primarily in private apartments, is no longer possible with such volume. Landlords would terminate contracts in ever increasing numbers. The state must therefore now “immediately provide state community accommodation, especially for large families,” demands the president of the district council. Since the refugees have been covered by basic security since June, there are additional expenses for the municipalities.

The (Green) state justice minister, Dirk Adams, has meanwhile conceded the “considerable additional expense”: the federal and state governments would assume all the costs up to May, but the additional federal funds should now be paid out more quickly. In plain language, this means another gigantic burning of taxpayer money to distract from further existing deficiencies, at least temporarily. Adams does not even promise that the problem of accommodation could be solved. “The country has hardly any properties of this type of its own and the market has thinned out,” he explained. There are cases in which an entire block of flats has been occupied by three large families. Many of the extended families came to Thuringia from other federal states.

Lack of staff in asylum homes

In addition, there are hardly any personnel left for the operation and security of such large facilities. Within four months, more than 23,000 refugees were admitted in Thuringia alone. “It was clear that there would be a shortage at some point.” Since the country has no gymnasiums or similar facilities, one must “remain with the tried and tested system.” Undeterred, he asserted that no distinction was made between refugees. “That applies to the university professor from Kyiv as well as to Roma.”

Schweinsburg rightly suspects that the state government does not take the problems of refugee accommodation seriously enough. These would not be solved “by the country’s training courses on how to deal sensitively with other cultures,” but only by the government taking on responsibility resolutely. She therefore expects “a binding answer from the Minister-President.” So far, however, this has not happened. Ramelow said in all seriousness: “The tone and content of this supposedly public debate on human plight leave me perplexed. Respect for the challenges to be solved in order to assist Ukrainian refugees keeps me publicly silent.” This bizarre reaction suggests that the problems are likely to continue.

Thuringia is not the only state where this is happening. Berlin is also facing similar problems. A maximum of 30,000 refugees can be accommodated there, according to the responsible Senator Katja Kipping (Die Linke). But this number is not enough; Now the capacities there are also reaching their limits. The senator responsible for integration, among other things, explained that there are currently fewer than 200 free places in communal accommodation, and there are still 854 in total. “The situation is serious, even if the number of arrivals does not skyrocket again,” she said. “The free places available for refugees in communal accommodation are melting like ice in the sun.”

In addition to the 450 to 750 Ukraine refugees per month, around 200 (!) so-called “former local staff of the Bundeswehr” from Afghanistan arrive — also monthly — and there are also 1,080 “regular” asylum seekers alone. On average, 1,700 to 2,000 new places per month are required. Kipping now wants to try even harder to rent new accommodation. Due to the excessive financial demands of the owners (who are of course in a gold-rush mood) this was not possible with about 50 properties.

Here, too, a disaster is once again being announced, which is by no means being fought against, but is being made worse: in December it was determined that 968,900 Berlin households have a housing entitlement certificate for social housing. However, there are only 88,901 social housing units, with 90 percent of those eligible left behind. But instead of finally applying the emergency brake, that is, drawing conclusions from these monstrous conditions and strictly limiting the influx of foreigners, the Berlin government still wants to take in more migrants — and also rejects the deportation of asylum seekers who are obliged to leave the country.

The immigrants, taken in as if out of hand, unchecked and at the expense of the taxpayers at the unilateral request, cannot be accommodated, local citizens are threatened with homelessness and illegal immigrants should also be given a permanent right to stay. These are the cornerstones of an irresponsible (not to say criminal) policy against one’s own population. This will take revenge in the foreseeable future.

The “refugee” movement is deliberately created and encouraged because it is an important component of the Great Reset. This destroys established structures, as well as the image of families. With immigration, envy, resentment and massive cultural and social differences are imported and promoted, and considerable violence against the indigenous population is also brought into the country. Everything is going as planned.

And it is exactly as a federal police officer said in March 2022: “only a fraction are really Ukrainian refugees. ‘Among them are large families who… are identified as Sinti and Roma. They have brand new Ukrainian passports, which are also real. Someone in Ukraine is earning a fortune right now.’”

4 thoughts on “Ukrainian Gypsies are Breaking the Thuringian Asylum System”