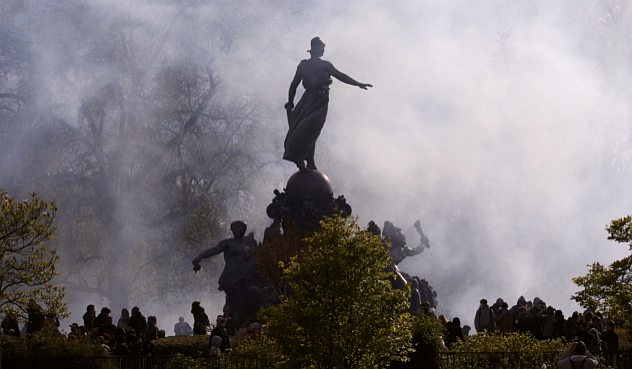 Éric Zemmour is a popular French commentator who became a candidate in the recent presidential election as the leader of the Reconquête (Reconquest) party. He did not make it to the runoff, and is now running in the upcoming legislative elections.

Last weekend the League of Champions soccer final was held at the Stade de France in Paris, with Liverpool playing Real Madrid. North African “youths” staged violent riots for the occasion outside the Stade de France, and police had great difficulty controlling them.

To save face, the official French line was that Liverpool fans — you know, those English soccer hooligans — were behind the violence. But this was a canard: all those arrested for significant violence were culture-enrichers.

In the following opinion piece Éric Zemmour addresses last weekend’s shameful events at the Stade de France. Many thanks to Gary Fouse for translating this op-ed from Valeurs Actuelles:

[Tribune] Éric Zemmour: The two matches at the Stadium of France

Violence broke out on the sidelines of the League of Champions final, in Seine St-Denis, Saturday 28 May. Éric Zemmour, the president of Reconquest [party] and a candidate for the legislature in the 4th district of Var, denounces a “civil war led against our people by the barbarians,” and issues a wakeup call.

On Saturday, while the Real Madrid-Liverpool match was being played on the field of the Stadium of France, another match was raging on the outside of the enclosure. This second match saw the police against the enemies of France. France lost this second match in the eyes of the whole world.

What happened? France organized the most-watched sporting event of the year in the entire world. In terms of popularity, the final of the League of Champions is surpassed only by the World Cup. On the five continents it is awaited with passion. The number of TV spectators is over one billion, and the organizing country knows that it must deploy the treasures of professionalism so that the event is a great moment of sporting and festive communion. Especially when you have on the bill two absolutely mythical teams, the splendid Real Madrid and the legendary Liverpool Football Club.

But the international festival turned into a local civil war. What happened? Delayed by the public transport strike, knowingly organized that day by the leftist unions, ready to sow disorder, a number of Liverpool fans arrived late to the stadium. One can easily understand their disappointment: The evening was one of the most important in their lives, and then the French unions caused them to miss the opening kickoff. Jostling, anger, and trouble began. But the incident would have ended there, and the match would have been simply delayed a bit — nothing serious.

Then a crowd of scum from Saint-Denis showed up. The media call them “youths”. A crowd? A horde. Or more precisely, an army. Because if they had, perhaps, a vague desire to attend the match without paying, their first, deep motivation was to sow chaos, to loot, and to confront the police in closed ranks.

This army quickly overwhelmed the police, and the madness set in around the Stadium of France, which is French only in name. Our heroic police managed to hold back the tsunami of barbarians, but the images are dreadful. It is a raid of pillage and violence. Some fans are beaten up, abused, and robbed. The violence is total. The next day, the experts say we almost had an even worse catastrophe, which might have resulted in several deaths. Fortunately, this battle did not produce any deaths, but it did happen, and it has a global repercussion. In every country, the media are formal and unanimous. They have never seen such scenes in connection with a match, and many English and Spanish fans say they will never return to France. France is being described as a third-world country, afflicted and quite incapable of organizing a League of Champions final. Shame descends upon our reputation.

And it is even worse. Because the State, Gerald Darmanin in the lead, designates the Liverpool fans as the most culpable of this great security Beresina [battlefield where Napoleon fought Russia in 1812]. Gerald Darmanin no doubt finds the risk of a diplomatic incident with the English less dangerous than with Seine Saint-Denis. This time, dishonor is added to the shame. Because in refusing to point the finger at the true culprits — the openly anti-French scum — Macronism is not content to insult the entire English people, and through them, football fans as a whole. It shows unspeakable cowardice and a denial of reality that borders on willful blindness.

Because we know perfectly well that the army of thugs who attacked the Stadium of France is a direct result of immigration: The first arrestees at Saint-Denis Saturday included not a single Englishman, nor one Spaniard, but a majority were Algerians (18), Tunisians (2), and Moroccans (2), as well as “9 French of whom 7 had Magrebian (N. African) or African names,” as a police source confided to Valeurs Actuelles. And their hatred of our country is carefully stirred up by the extreme left (61.13% for Mélenchon in the first round in Saint-Denis). They want to submit France to their frenzy; they say it, they sing it, they shout it, and only the deaf refuse to understand them. The battle of the Stadium of France is for them a moment of universally publicized glory, a spectacular victory over French civilization. In avoiding denouncing their dangerousness, in letting them off as innocents and blaming the Liverpool fans, the authorities only encourage them to go further. They will, we can be certain. Real Madrid narrowly defeated Liverpool, but it is the general delinquency that won on Friday evening.

The civil war that is being led against our people by the barbarians is in full swing. There is nothing more hidden or underground. This war, I want to remind you, is one we never wanted. We have done everything to avoid it, but it has been imposed on us. The scum have imposed it on us with the help of the Islamo-leftist ideologues, who are their premier supporters. From this point on, it is a fact: it is there, and it must be stopped. Otherwise, France will be eliminated, not only on the international scene, but just as much from its own history.

So let us refuse to listen any longer to those who so brazenly lie about our situation and our destiny. We will not let them accept defeat. The legislative election is the time to show that the French people are still a great nation and that it is still capable of defending itself. It is up to us to be the best guardians of our country.

28 thoughts on “Jihad at the Stade de France”