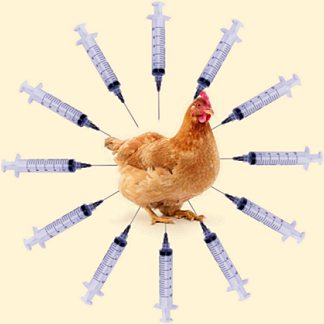 A few months ago the narrative surrounding the Wuhan Coronavirus had begun to unravel, so the Russo-Ukrainian war had to be arranged. Evidently that war has now stagnated to the point where it is losing some of its Great Crisis punch, so another pandemic needs to be launched. This time it’s the bird flu, and the initial focus will be on the chicken population.

Many thanks to Hellequin GB for translating this article from the German website Arrangement Group:

In the US, bird flu has long since returned, and it has already caused shortages in egg and poultry supplies. For this reason, vaccination for chickens will soon be compulsory in the USA and private chicken keeping will be banned.

As a result, many states have now completely banned the sale of chicks to the public. The largest egg producer in the US has culled all of its chickens and fired its workers.

How can these viruses coordinate so well and make one of them Corona during the winter while the others will soon spoil our summer? It’s all just starting slowly for us, but due to the flight movements of the birds in spring, the viruses are making good headway towards us at the moment.

The coronavirus flies by plane, and the bird flu comes straight to us with the birds from Ukraine.

There, such viruses were grown in the high-security laboratories and in the video below you can see the malicious grin of the wife of the Virus Lord (Billy Boy) when he announced the next pandemic.

We will probably see the bottlenecks in the food trade with eggs and poultry in Europe around the middle of the year. But as always in such cases, that’s only half the story. Because not only are chickens threatened by the bird flu, but also people. Incidentally, the new bird flu virus was deliberately developed in such a way that it can be transmitted directly from birds and chickens to humans. This is where you should start getting worried. They want to starve you and make you sick at the same time. This will end tragically.

When will the vast majority wake up to the threat towards their own LIVES? Or are they so blinded by prejudice and hatred towards those that can still think for themselves, that they would rather see their children and themselves perish than to acknowledge that those “people” want us all dead or enslaved, especially when those “people” are completely OPEN about it?

I know that people can easily be fooled by those they place their trust in, but why they are placing trust in the same people over and over again after being lied to over and over again is beyond my understanding. Frankly, I’m starting to despair of my fellow man.

8 thoughts on “It’s Time to Vax the Chix”