Nowadays it’s well-established in most Western countries — not just in Sweden — that the truth is no defense when it comes to certain sensitive issues, among them immigration, race, and Islam. In the case of Bertil Malmberg all three issues overlap. Mr. Malmberg was convicted in a Swedish court and will be fined for stating a simple fact which the race hustlers who run our “democracies” will not allow to be discussed.

Our Swedish correspondent LN, who translated the article below, includes this introductory note:

A Swedish “Freisler court” has convicted the lecturer and scholar of Islam Bertil Malmberg, who is also the author under the pseudonym Nils Dacke of the competent book on Islam: Islam under the veil.

As a result, Sverigedemokraterna (SD) immediately initiated an exclusion case —this formerly Islam-critical political party is now only interested in clueless, marionetting puppets as members.

The translated article from Fria Tider:

SD politician is convicted of referring to a scientific study

The regional politician Bertil Malmberg (SD) was convicted today by Nyköping District Court for the crime of incitement against an ethnic group (hets mot folkgrupp). The reason is that he referred to research that the South Sudanese have a low IQ. Malmberg will now be fined SEK 24,000 ($2640).

The IQ indictment against Bertil Malmberg

In a speech before Sörmland’s regional council on 27 April this year Bertil Malmberg mentioned scientific research.

During the year, the Swedish Migration Agency [Migrationsverket], in its lack of wisdom, placed a number of South Sudanese quota refugees in Sörmland. It is a matter of fact that the population there is among the peoples who have the lowest intelligence in the whole world, which is well-documented in research, he said.

In January, Fria Tider had written about the current research in a high-profile article. The study showed that South Sudanese have a barely measurable average IQ below 55.

When Bertil Malmberg mentioned the South Sudanese to the regional council, he was quickly interrupted by Chairman Tomas Borin (VFP [Välfärdspartiet, socialists]). He was then reported to the police by the Social Democrat Christine Gilljam.

This summer Chief Prosecutor Robert Eriksson chose to proceed with a prosecution against the SD politician. In a comment to Fria Tider, Eriksson explained that it does not matter whether what Malmberg said has support in the research or not. It is still a breach of opinion.

The district court considers that the SD politician’s statement was “derogatory”, and that he pointed out a specific ethnic group as “less worthy”. It is “difficult to interpret the statement in any other way than that the designated ethnic group would be less worthy than other ethnic groups,” the court writes.

Bertil Malmberg has been sentenced to a suspended sentence and to pay a 40-day fine of SEK 600.

Malmberg has received anything but support from his own party in connection with the incident. Immediately after the incident, in the regional council SD’s district chairman Anton Berglund Bertil Malmberg called for him to leave all his assignments for the party, wrote P4 Sörmland then. According to Berglund, describing the low IQ of South Sudanese was an “unacceptable use of language”. He also stated that SD “strongly distanced itself” from Malmberg’s statements and that an exclusion case had been opened.

Bertil Malmberg himself has denied the crime and tried in vain to defend himself by saying that he only told the truth.

Below is a brief summary of Islam under the veil, the book written by Bertil Malmberg (writing as Nils Dacke):

Islam under the veil 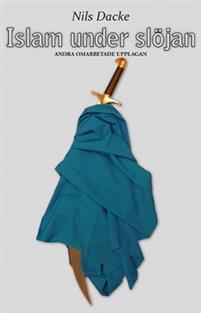 Islam under the veil wants to give a fairly complete but still brief description of Islam, its background, emergence and early expansion over large geographical areas. The book attempts to summarize the foundations of Islamic ideology as they appear in Islam’s own writings. It also seeks to shed light on how Islam relates to modern democratic society and not least its representatives’ aspirations for Islam in the West. The book was written during a time when Islam and its manifestations had become topical in the Western world, which few could have guessed just a couple of decades ago. It appears almost daily that ignorance of Islam is widespread among decision-makers, actors in the media and the people in general. Islam under the veil wants to try to fill a void here by conveying insight into Islam and becoming a gateway to in-depth studies of Islam.

Is Islam a religion among other religions, or a totalitarian, expansive political ideology that strives for domination and world domination and that lacks Western democratic values? Misleading information is often disseminated by both representatives of Islam and Western debaters. It is the author’s conviction that in-depth knowledge of Islam and sharia is necessary to be able to understand and handle the extensive societal change that Sweden and Europe are in the midst of. Reduce your ignorance on this highly topical topic; read Islam under the veil and make your own assessment.