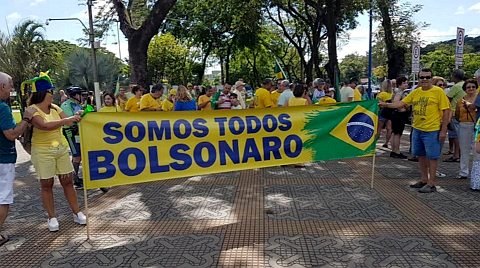 A recent meeting between Brazilian President Jair Bolsonaro and Beatrix von Storch of the AfD (Alternative für Deutschland, Alternative for Germany) caused consternation among the bien-pensants in Germany — and even among some supporters of the AfD, according to the article below.

Mr. Bolsonaro receives the same treatment in the international media as Hungarian Prime Minister Viktor Orbán and former US President Donald Trump. Anyone who gets his news by skimming MSM articles or glancing at the talking heads on TV comes away with the idea that all three leaders are dangerous would-be totalitarian demagogues, if not outright neo-Nazis.

Counter-argument: Why is Jair Bolsonaro so popular in Brazil?

In Brazil, the conservative President Jair Bolsonaro, who was elected with 55 percent of the vote in 2018, is still extremely popular. In Germany, thanks to unanimous media defamation, he is viewed negatively even by conservatives. Many PI-News readers also criticized the meeting between Bolsonaro and Beatrix von Storch. A reply from the Brazilian author Fernando de Castro.

Jair Bolsonaro was elected in 2018 after almost 20 years of rule by the corrupt left-wing, centralist parties to strengthen the rights of the unborn and gun owners, rebuild state infrastructure and at the same time allow for more private-sector business.

Since then he has repeatedly been the target of left-wing attacks aimed at sabotaging his plans. The Left tries to subvert his agenda with fake news campaigns and waves of lawsuits in court. The Supreme Court, made up of judges appointed by the Left, openly attacks the Bolsonaro government and fuels conflict.

During the Corona pandemic, the Bolsonaro government wanted to protect the people without destroying the economy — the policy that in retrospect has proven to be the most effective worldwide, for example in Scandinavia. In April of 2020 the National Congress approved the emergency aid package, with which 40 million Brazilians were entitled to 100 dollars in financial aid, as much as ten years of so-called “family support” from the previous left government.

At the beginning of the pandemic, however, the left-wing Supreme Court blocked presidential authority and authorized regional governors and mayors to independently issue quarantines. Bolsonaro has always been against the lockdown because he understands the serious consequences it will have, especially for poor people. “Hunger kills more people than the virus,” said the President in 2020.

In practice, however, Bolsonaro only had three measures left:

(Note: The German media then presented this disempowerment of the president as “Bolsonaro’s dangerous Corona policy”.)

The Corona Corruption of Bolsonaro’s Opponents

While Brazil suffered 510,000 corona deaths, several governors and mayors diverted the federal government’s Corona aid funds for other purposes and were investigated by the federal police.

The governor of Rio de Janeiro, Wilson Witzel (Christian Social), lost his mandate due to money laundering, passive corruption and the formation of a criminal organization. According to federal police, he embezzled Corona funds for hospital construction.

In the state of Amazonas, Governor Wilson Luna (Christian Social) was suspected of buying unsuitable ventilators from a wine shop. Luna remains in office; the investigation is still ongoing.

In the city of Recife in the state of Pernambuco, 500 ventilators were purchased under the socialist mayor Geraldo Júlio, which were bought by a veterinary supplier, were only tested on pigs and were not suitable for use on humans. The veterinary supply store is being investigated for tax evasion. One of the main suspects is the former health officer of the city of Recife, Jailson Correia, whose cell phone was confiscated by the federal police.

With 57,358 murders in 2018, Brazil was the sad world leader in murders in absolute numbers, and ranked 15th in the world for the murder rate per capita. During his 2018 election campaign, Jair Bolsonaro always advocated for the right of responsible citizens to self-defense.

Since 2005, the Left government of Luiz Inácio Lula da Silva of the Labor Party has ignored a referendum in which citizens demanded the right to own weapons for self-defense. The government insisted on extreme regulation of gun ownership, which led to a brutal increase in violent crime in the country.

Since taking office, Bolsonaro has campaigned for citizens’ right to self-defense. The number of murders in Brazil in 2019 fell 19% in just one year to 41,635, the lowest level since 2007.

In May 2020, the leftist judge Celso de Mello prompted the publication of a video from a confidential cabinet meeting in which Bolsonaro vehemently spoke out in favor of citizens’ right to self-defense. In it he criticized the former Justice Minister Sergio Moro, who when he resigned had accused Bolsonaro of hindering the work of the federal police.

Bolsonaro vehemently defended Brazilian democracy and freedom in the video: “You could very easily reintroduce a dictatorship here in Brazil. People are not allowed to defend themselves and are locked up at home. That is why I want to secure the right to own guns. That’s the best guarantee that some son of a bitch won’t establish a dictatorship here.”

Bolsonaro points out in the video that the first step in any dictatorship is always to disarm the citizens: “That is why people must be allowed to own weapons. That is the best protection.”

Despite the left-wing defamation campaign against him, President Jair Bolsonaro is still very popular with the Brazilian people. Motorcyclists mobilize at demonstrations across the country, and when he shows up at the airport, crowds gather to cheer him.

A committee of inquiry in parliament is supposed to investigate the government’s Corona policy, but it is composed of members such as Renan Calheiros of the Democratic Movement, against whom eight investigations into money laundering and corruption are pending.

“Bolsonaro’s slash and burn of the jungle”

Editor’s note: Barely discussed in Brazil, in Germany Jair Bolsonaro is primarily associated with the “destruction of the Brazilian jungle”, a phantom phenomenon that is not within his power at all, but primarily that of the governors.

Bolsonaro accuses international NGOs of wanting to undermine Brazil’s sovereignty with the environmental issue and even of setting fire to it themselves. Brazilians also accuse the foreign NGOs of abusing the Indians in the Amazon for political purposes and not really being interested in their welfare.

The fact that the socialist electoral fraudster Evo Morales in neighboring Bolivia is never criticized by our media for much larger slash-and-burn operations should make the critical reader prick up his ears.

6 thoughts on “Why is Jair Bolsonaro so Popular in Brazil?”