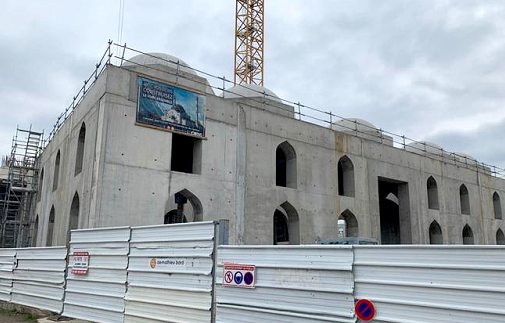 Back in January there was a big fanfare over the “anti-extremism charter” that French President Emmanuel Macron was asking all Muslim associations in France to sign. The charter was devised at Mr. Macron’s request by the French Council of the Muslim Faith (CFCM), which acts as the umbrella organization for all Muslims in France.

However, not all Islamic groups were willing to sign the infidel pact (see this article for more on the controversy). One of the dissenting organizations was Millî Görüs, the “Islamist” Turkish federation.

The expansion of the Eyyub Sultan Mosque in Strasbourg has caused controversy because it is managed by Millî Görüs, and was recently offered a €2.5 million grant by the Green mayor of Strasbourg to help with the construction.

Below is a segment from a French talk show about the Strasbourg mosque. Many thanks to MissPiggy for the translation, and to Vlad Tepes for the subtitling:

Thanks also to Gary Fouse for translating this article from Le Figaro:

Strasbourg mosque: EELV is lodging a complaint of defamation against Darmanin and Schiappa

A standoff pits ministers against the Green mayor of Strasbourg after the vote on Monday by the municipal council on the “principle of a subsidy” of €2.5 million earmarked for the construction site of the Eyyub Sultan Mosque.

Photo caption: The Grand Mosque of Strasbourg under construction

Europe Ecology Greens [Europe Écologie Les Verts, EELV] announced Saturday its intention to bring a complaint for defamation against ministers Marlene Schiappa [Citizenship] and Gérald Darmanin [Interior], who oppose the Green Party mayor of Strasbourg concerning a possible subsidy for the construction of a mosque.

“In accord with the executive bureau and Jeanne Barseghian, the mayor of Strasbourg, EELV will lodge a complaint for defamation against Marlene Schiappa and Gérald Darmanin,” declared Julien Bayou, national secretary of EELV, in a statement to the federal council, of which Agence France Presse has obtained a copy. “We have taken the decision yesterday (Friday) evening and the complaint will be lodged during the course of next week,” stated the head of the Greens.

“Gérald Darmanin, the ‘minister of school lunches’, has accused the majority EELV, led by Jeanne Barseghian, of financing foreign interference on French soil. Its delegated minister, for his part, stated that EELV made a pact with ‘radical Islam’. The issue: The adoption on Monday of a subsidy for the construction of a mosque,” declared the national secretary.

According to Jean Bayou, “We have a government and its minister of Interior and Religions who lie. He never alerted the mayor of the danger that the association carrying out the project represents. For us, it is clear: If this association is dangerous, let him close it. That the ministers use and abuse the means of public power to smear their political adversaries for purely electoral reasons and/or to create a diversion and try to divert attention from their failures and their shortcomings, we cannot accept that,” noted Julien Bayou. “That the ministers, rather than do their duties, prefer to play ‘community manager’ or hired gun for Macron is unacceptable!” he added.

A standoff pits Gérald Darmanin against the Green mayor of Strasbourg, after the vote Monday by the municipal council on “the principle of a subsidy” of 2.5 million euros for the construction of the Eyyub Sultan Mosque, being carried out by a Turkish association, the Islamic Confederation Millî Görüs (CIMG). “We feel that this collective (the Town Hall of Strasbourg) should not have financed foreign interference on our soil,” the minister of the interior said Wednesday.

2 thoughts on “A Mosque Too Far”