It seems that you can always count on the Greens to be an engine of Islamization.

Corona as a reason for everything: Greens call for the introduction of muezzin calls!

They are creative: with reference to the lockdown, the Greens in Gelsenkirchen are now calling for the introduction of a loud public muezzin call. For many Muslims that would be “a piece of normality, familiarity and routine,” they say. I beg your pardon? 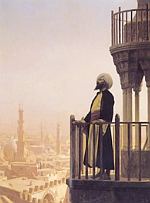 Even if there are already mosques with special permits, the muezzin call in the Ruhr area is neither normal nor familiar, and should not become routine in the eyes of many citizens.

Rather, it seems that the Greens are instrumentalizing the continued state of emergency to enforce old demands. While this tactic has already worked well elsewhere, the call for the muezzin is too transparent even for the local alliance of CDU and SPD.

“Whether the energy transition, de-industrialization or, in this case, the muezzin call: Corona is the Greens’ new universal justification. No matter how unrelated the topic may be,” comments Gabriele Walger-Demolsky, integration policy spokeswoman for the AfD parliamentary group in North Rhine-Westphalia. “Of course, Article 4 of the Basic Law protects the right of Muslims to practice their religion freely. The muezzin call is not one of them. The Basic Law also stands for this: Nobody has to tolerate being forcefully harassed with religious confessions. It goes without saying that shouts like ‘There is no other God but Allah’ do not contribute to integration. This is less about the practice of religion than the openly proclaimed claim to power.”

One thought on “The Muezzin Yodels in the Ruhr”