Our Dutch correspondent H. Numan reports on the latest attack on Geert Wilders by the establishment. 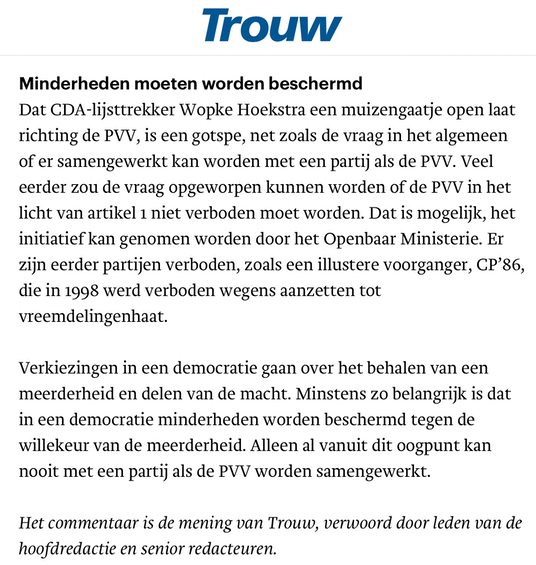 Dutch newspaper calls for a ban on the PVV

I know this rag paper very well. Used to deliver it for years, when I was a boy. Even then I didn’t like to read it. It was a staunchly Dutch Reformed newspaper. The only reason I delivered it was they paid slightly better than other newspapers. With good reason, mind you: they had a lot fewer subscribers than other newspapers. I had to deliver papers to fewer subscribers over a much longer distance, and that was compensated.

Ironically enough, Trouw began as a resistance newspaper during World War Two. When I delivered the paper during the early ‘70s it presented the news from a staunchly Dutch Reformed point of view. As a kid, I found it a utterly boring and above all preaching paper. Not much has changed over the years. It still is a boring and preaching paper, now very politically correct.

Churchill said: The fascists of the future will call themselves anti-fascists. Well, he didn’t actually say that. It is ascribed to him. In his day fascists were called Nazis. As national socialism is painfully close to international socialism, socialists went to great lengths to hide that fact. After WW2 they consistently called Nazis fascists (and everyone else they didn’t like). But when Churchill was alive they hadn’t taken over the world as yet.

Trouw is the proverbial example of it. Anti-fascist turning into fascists. From preaching the gospels they slowly replaced it with the gospel according to Marx. More accurate: they still preach all the gospels, but only if it agrees with the gospel of Marx. As do all Dutch newspapers today. None exempted.

How did this came to be? When I delivered newspapers, most cities and even villages had their own newspaper. Bigger cities, several newspapers. News is not, and never was, neutral. Though progressive journalists always claim that lie. Newspapers present the news according to the viewpoints of their subscribers. A Roman Catholic newspaper would print the same news facts as other papers, but from a Roman Catholic point of view. And with much more attention on what the pope was doing. The latter was something you don’t read a lot about elsewhere in, say, Trouw.

I’ve written many times about the pillared society. This is an example how that worked. When the pillared society disappeared, the need for focused newspapers disappeared as well. Many closed down, or were merged into bigger newspapers. Especially the Algemeen Dagblad and De Telegraaf. They have editions with local news for different cities or areas. Not only did the secularization of society have a major influence, so does the Internet. People today read news online. They don’t want to pay for it anymore; even reading news with advertisements is not really working.

The bigger newspapers merged into two major Belgian news media companies. Last one was the Telegraaf. DPG Media and Mediahuis are very Very VERY politically correct. That doesn’t mean to say that all Dutch newspapers automatically follow what the progressive Pravda wants them to print, but none of them supports the PVV. At best, they publish about it only when they can’t avoid the topic. Or to slander Wilders over something. Like Trouw does.

The editor-in-chief of Trouw wants the PVV banned, as they — according to him — infringe on the freedom of religion. He thinks any minority (Al Qaeda is also a minority, by the way) need all the protection of the law they can get. Especially from evil parties like the PVV. Whitey has done it! He rants on the constitution — which all progressives always do. When it suits them.

The Netherlands does have a constitution, don’t get me wrong. But for us it is simply a boring piece of legislation that nobody knows. At school we learn that we have a constitution. That’s all. Want to have some fun with a Dutch progressive referring to the constitution? Ask him how many articles the constitution has. Unless he graduated in law, he won’t know. I myself have no idea; there is a Wikipedia article about the Dutch constitution, but it doesn’t mention how many.

We had a minister who openly said: “if the majority of our population wants sharia legislation, and they vote for it? Then we’ll implement sharia law. That’s democracy.” This gentlemen, Piet Hein Donner, has a doctorate in law, teaches law and has obviously no clue what he is talking about. Suppose a real Nazi group were to get enough popular support to implement Nuremberg Laws, should we do that? Of course not. He’ll be the first to admit that. So why sharia, yes and Nuremberg Laws, no? What exactly is the difference?

What progressives seem to think is that their legislation is chiseled in stone. No matter what. Only their legislation, mind you. Once a progressive law has passed, that is forever. The dogma demands it. The possibility of changing one of their laws cannot be discussed. Let alone abolishing it. That is fascism! Indeed, it is. That’s how far we are on the way to a progressive society…

Any law can be abolished in a real democracy. If the majority of the people democratically vote for sharia law, of course it becomes law. On the other hand, if the people democratically vote to re-institute the death penalty, that should also become law. That’s democracy too. Not fascism, as many people shout all day long. However, rules for thine, not for mine. It’s not that they are hell-bent on abolishing existing laws. They simply ignore them.

Why is this piece of news important? Because that is exactly the way Pim Fortuyn was murdered. It began when the media started to call him an outright fascist. Pretty soon afterwards every progressive politician called him an outright fascist. Very quickly a progressive murderer (Volkert van de Graaf had committed murder before, but it couldn’t be proved) acted. Afterwards crocodile tears were shed. “We didn’t mean it that way.”

Au contraire. They bloody well meant it precisely that way. It’s (still) election time, so I expect more of these kinds of editorials popping up.

Just a funny piece of gossip to finish this story. Did you know that princess Beatrix (former Queen Beatrix, mother of the present ruler) bought a new horse? She named him Volkert. What a remarkable coincidence.