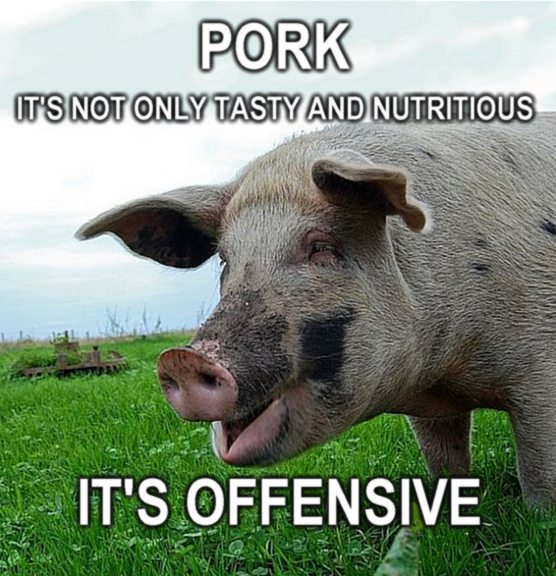 The incident below reminds me of the issue of the Confederate flag here in the USA. People are offended by the Stars and Bars; there’s no doubt about it. Sometimes severely offended. But the police can’t come to your house and tell you to take your Confederate battle flag down. Maybe in San Francisco or Ann Arbor, but not here in Virginia. Not yet.

It’s my choice whether or not to celebrate my Confederate heritage by displaying the flag. As it happens, most of my neighbors are black. They would not view it the same way I do. Some of them would no doubt be offended, or hurt, or angry, or some combination thereof, by my flying the flag. Since I like my neighbors (most of them, anyway), I choose not to fly the Confederate flag, as a courtesy to them.

But it’s my choice. No political authority tells me not to do it.

Thank God for the First Amendment.

It’s not the same in the city of Chemnitz, in eastern Germany. There the police can tell you whether or not you can serve pork. The rule seems to be this: Pork is allowed to be cooked if no one can easily tell if what you are cooking is in fact pork. That means no head, tail, trotters, or clearly visible pig shape. And the police will come and check to make sure your pork barbecue abides by those rules.

It’s not clear whether the following video is from the same incident described in Jihad Watch last month, but it seems likely.

According to Searchlight Germany, “After the barbecue, which was organised as a protest against the ‘interreligious Eid festival’, participants were attacked by two Syrians and attacked with a knife.”

It’s clear who is in charge in Germany now. How long will it be before Merkel’s government, seeing consumption of pork as evidence of “right-wing extremism,” bans it altogether?

The far-right group Pro Chemnitz organized a barbecue in protest. It was directed against Muslims who were celebrating the end of their month of fasting Ramadan. In the end, the police intervened.

The extreme right-wing group Pro Chemnitz launched a police operation with a pig. As a protest against an event for the Muslim Sugar Festival at the end of the month of fasting Ramadan, Pro Chemnitz had invited people on Saturday to a barbecue, where a piglet landed on the grill.

Whole piglet was not allowed

However, the local authorities had not allowed them to grill a whole piglet, which is why officials intervened, as the Chemnitz police department announced. The suckling pig had to be disassembled.

Pro Chemnitz itself wrote on Facebook that they had “strictly” adhered to the guidelines: no whole animals and no single pig heads could be displayed. The piglet had neither legs nor tail. Believing Muslims do not eat pork. This is what the action of Pro Chemnitz were targeting…