Geert Wilders is on trial, yet again. His “crime” was to ask his supporters whether they wanted more or fewer Moroccans. This is the second time he has been prosecuted for this crime; the first ended in a mistrial.

The announcement below was sent by the PVV (Party for Freedom, Partij voor de Vrijheid). 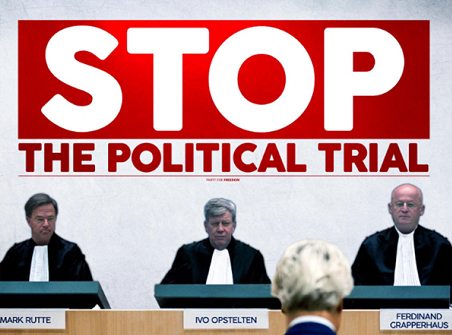 Tomorrow morning in the extra-secured court at Schiphol Airport the trial against Geert Wilders resumes.

Earlier this month Geert Wilders called for a parliamentary inquiry into the political interference in his trial.

Wilders’ defense team obtained a notary statement from a former official of the Department of Justice in which the official declares overhearing a conversation between the then Secretary-General and then Minister of Justice Opstelten.

According to this remarkable statement Opstelten explicitly said that the public prosecutor should proceed to prosecute Wilders because ‘he is getting in our way’.

Dutch media reported about contact between Opstelten and the head of the public prosecutor about the case in 2014.

They also mention Opstelten was keen to see Wilders prosecuted.

The Current Minister of Justice Ferd Grapperhaus still refuses to send documents detailing the meetings —which had been officially denied — to parliament.

The documents will remain secret, the minister told MPs.

The original appeal began in May last year, but Wilders’ legal team successfully applied for the judges to be removed after alleging bias.

Both Opstelten and former prosecution chief Herman Bolhaar have recently been heard behind closed doors.

This political interference is unworthy of a Western democracy and this trial must be stopped!

One thought on “The Political Trial of Geert Wilders”