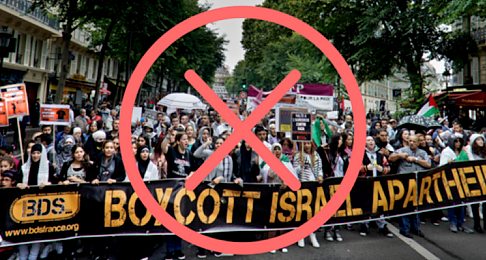 Well, they’re not banging heads, but Israel is taking (some) names of the leaders of organizations who promote BDS, making them officially persona non grata in the country. At last.

* What?? No Argentinean groups? Maybe all the Nazis finally expired.

This is a start. But it needs to spread deeper and wider. As does information about the depth of the entrenchment of anti-Semitism in Europe.

Norway is a good example. When Breivik massacred all those kids on Utøya Island in 2011, he killed off many of the next generation’s pro-Palestinian BDS leaders. Mark Humphrys devoted a page of his own investigations into Breivik, and into the history of the AUF, whose youngsters had gathered on the island for summer fun: to bash evil Israel.

Fatah Youth went to the camp: “It is with consternation that we have received the dramatic news of an awful terrorist attack against a summer camp ran by our comrades of Norwegian Labor Youth AUF … The Fatah Youth group had taken part in the summer camp in the past on the Island of Utoya … Fatah Youth has participated for almost 15 years in the same summer camp”.

Read Mark’s page to see how remarkably open the AUF is about its hatred of Israel and the responsibility (at least among their leadership) for the deaths of innocent Israelis.

He says some of the children initially thought they were in a game:

Apparently, the children and youths were so full of anti-Israel hatred that some of them thought the shooting might be a simulation of Israeli crimes, meant to teach them how bad Israel is.

It’s good that Israel is beginning to push back more robustly against this blood libel. Until they provide their own sanctioning of the leaders of BDS, it will only grow.

In some possibly related good news, early last year Canada’s government formally refused to validate BDS. The formal condemnation was introduced in Parliament by the Conservatives but was also broadly supported by the liberals, with an endorsement of the motion by Trudeau.

Some months later, Ottawa University also rejected any support; they voted instead to “to remove all language related to BDS, and replace it with a statement of support for peace between Israelis and Palestinian Arabs”.

Perhaps the odious BDS movement has peaked and is beginning a deserved roll-back. Israel’s decision to ban its leaders is a good start.

3 thoughts on “Israel Finally Goes on Offense Against BDS”