The PC Police are at it again in Finland. This time they’re chasing down a politician who dared to post uncomplimentary things about Islam on the Internet.

Here’s the story from Tundra Tabloids:

Sebastian Tynkkynen (FB) is a Finnish politician who has been at the forefront in creating awareness about Islamization in Finland.

He had been investigated earlier by a heavily politicized Finnish police department over his Facebook postings in August of 2016, and went to trial almost exactly a year ago today, and was eventually found guilty of “hate speech”. Today, Sebastian asks the same question concerning this investigation as he did in his closing statements at his trial: ”How else can one write about Islam…?”

The text simply reads: “Terrorism knows no religion. If you don’t count Islam” 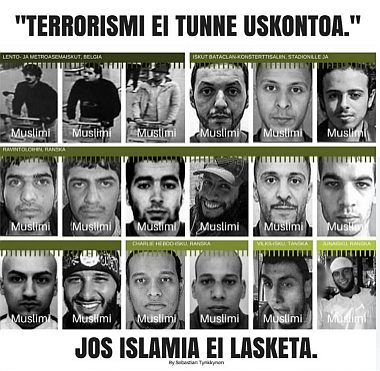 What the Finnish judicial system and the police are doing can accurately be described as prosecuting political speech. As I have often stated before, Muslims by default belong to a political party, called Islam. It’s not of our making, our choice nor fault. Islam is what it is. It’s an entire society and/or civilization with its rules and laws that govern every aspect of human life, even that of non-believers.

Criticizing that ideology and the followers who champion its-all encompassing mandate, is by default political speech, and it’s that speech that needs protection, not prosecution. In 2015 Jyllands-Posten’s former editor Flemming Rose gave a wonderful speech at Helsinki University concerning the ever growing restrictions we face here in Europe on free speech. Truth is no longer being considered a valid defense of one’s own speech and thoughts if it runs counter to political policies accepted by the ruling (consensus driven) elite…

What we are witnessing, and Sebastian Tynkkynen and others like him have been experiencing at the hand of the state, is not unlike the scenarios just described. He (Sebastian) is being persecuted because he is offending the state, the political policies that they’ve embarked upon shall not be judged nor criticized at all. The protected class, whether they be dead soldiers or Muslims promoting sharia law and Islam in general, have the government’s full backing.

This is of course highly political, and those who dare question their policies will be prosecuted to the fullest extent of the law. This makes anyone running afoul of the government’s policies on what can be said and not said about Islam a political dissident. Here is Sebastian’s video concerning his recent incident with the police.

The trial of Finns party chairman, Jussi Halla-aho cemented the fact that in Finland, truth is not a defense, that in Finland, we have lost the fundamental right to not only defend ourselves, but to speak our minds.

Read the rest (and follow the embedded links) at Tundra Tabloids.

11 thoughts on “Terrorism knows no religion. If you don’t count Islam.”