The following report on last month’s OSCE conference in Warsaw by Elisabeth Sabaditsch-Wolff was published by JournalistenWatch and kindly translated by JLH. See the OSCE Archives for more on the events in Warsaw this year.

The Truth Versus the OSCE’s Decreed Truth

In the last few days, Europe’s largest and best attended conference on the subject of human rights (“human dimension”) came to an end. There were said to be 1500 attending. The Organization for Security and Cooperation in Europe invited diplomats and experts, as well as the general public to an annual discussion in Warsaw about observance of human rights standards in the OSCE area. For the first time, the conference took place in Warsaw’s EURO soccer stadium, which was welcome because of the size of the locale and the number of participants.

Our delegation included members from the United States, Denmark and Austria. It is regrettable that many European fighters for freedom of expression couldn’t make up their minds to come to Warsaw. They would have contributed to a stronger presence, which is so important nowadays. For example, a deficit in (allotted) time and personnel prevented mentioning many of the considerable restrictions of freedom of expression in Germany (German justice minister Heiko Maas and his restrictive law passed at the end of June), as well as the many judgments and harassments against alleged cases of “hate speech” or the problems of the AfD in renting locations in the run-up to the election. 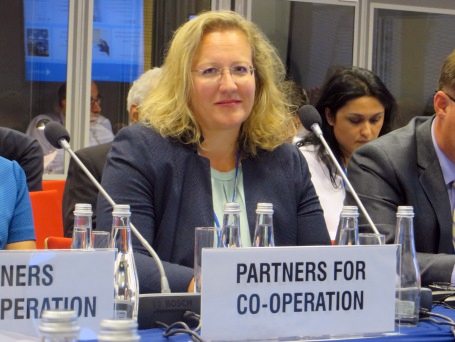 The first two days were devoted to the official opening, with speeches by politicians, and to freedom of the press and freedom to assemble. Pax Europa spoke first about the scandalous verdict against Michael Stürzenberger and then about the problems of the organizers of the “March for the Family” in Vienna[1]. Neither of these subjects elicited a response from the governments in question.

The sessions on Thursday and Friday were concerned with the subjects of religious freedom as well as tolerance and non-discrimination. Customarily, these subject areas are not only contentious, but also characterized by full lists of speakers. This year, too: Early queuing to get on the speakers list, contentious positions, but also — something new — rebukes from the moderator, referencing OSCE “commitments” that must be adhered to. These rebukes were exclusively directed at our delegation.

An OSCE employee told us personally that our truth was not his truth, nor that of the OSCE. There was no discussion. He noted parenthetically that the OSCE has sought ways to exclude our delegation from participating, but did not succeed because of its own rules concerning civil society.

The decreed truth for the OSCE since 2002 has been that its member states strenuously reject identification of terrorism and extremism with a particular religion. Ergo, there is no discussion and the problem is solved — that is why Europe is incapable of putting a stop to the terrorism coming from just one particular group. The saying goes: Know your enemy. If I cannot name the enemy or investigate it, I cannot expect it to be defeated. We might also ask what would have happened if this kind of law had prevailed in the 1930s.

OSCE’s tolerance extends only so far as participants adhere to the laws of tolerance as seen through the lens of the OSCE. Accordingly, we must tolerate terrorism; in fact, it is becoming part of our lives, as the Muslim mayor of London informed the public after the first attacks there. All discussion inside the OSCE was ended in 2002, and anyone who questioned the law of tolerance was reprimanded, corrected, ignored or — as happened this year — diplomatically “recognized” by various delegations and the Austrian president of the OSCE. We seem to have poked a wasp’s nest.

Finally, there is the question: what is the point of our delegation’s being represented at such a conference, when it clearly encounters only resistance? The answer is simple. First, there are many people both among the delegations and in the general public who tell us privately that they agree with us. We are the ones who are saying the unsayable. Second, if we do not speak, this decreed tolerance program will proceed unimpaired. Silence means consent! And third, everything we have said is part of the final document, and therefore public. In case anyone later claims that all of this madness was unanimously passed.

The OSCE may be sure that we will take part in the coming conferences and continue to speak the truth. Just not the decreed truth!

Photo: The author, who took a firm stand at the OSCE 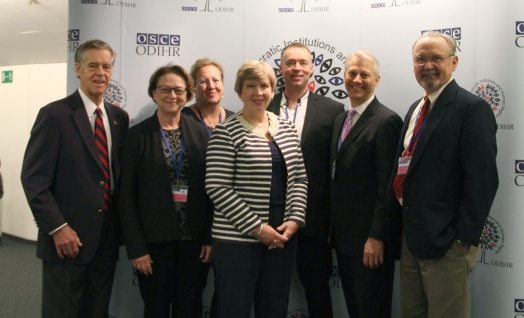 One thought on “The Truth Versus the OSCE’s Decreed Truth”