As a follow-up to “A Night at the Opera”, our Romanian correspondent cxt sends this report on the situation in Romania. 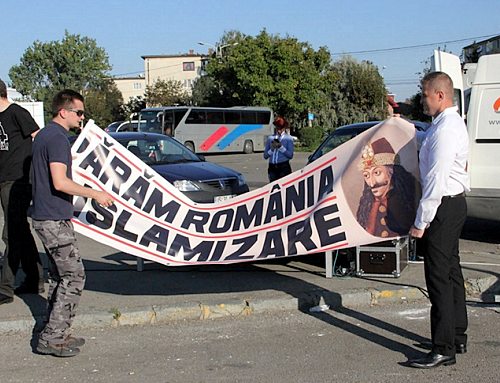 Resisting the Islamization of Romania

I follow the Facebook group “Nu islamizarii Romaniei” (No to the Islamization of Romania) for most news on this subject. The group is led by the same great guys who sang the National Anthem during the Islamic call to prayer.

I have two major concerns:

1. The Coalition for the Rights of Migrants and Refugees

The full name of the organization lobbying to loosen the citizenship requirements is the Coalition for the Rights of Migrants and Refugees, a group of all associations and NGOs that promote the invasion. It consists of 12 NGOs, and was formed in April, 2017. The NGO leading the charge to change the citizenship criteria is the Center for Public Innovation, “a spin-off of the Foundation for an Open Society… previously known as Soros Foundation Romania”, as they admit here (the link is in English).

Two months after the coalition was founded, they were already meeting with the Ministry of Justice (June 2017) to discuss changes regarding the citizenship process, even though, by their own admission, the laws regarding obtaining Romanian citizenship have been updated 15 (!) times since 1991. Their grievance (or their excuse to get their foot in the door) is that the laws don’t make enough special provisions for unaccompanied minors, old people and people with disabilities (Source). Considering how many migrants lie about their age, it is no surprise the coalition is lobbying for them.

They met with the Ministry under all sorts of pretexts — that the citizenship rules are too restrictive for foreigners, that they don’t correspond with the international treaties that the country has signed etc. (Source)

The Romanian government is full of socialists and people who received large Soros grants, very eager to take in migrants, so it’s a recipe for disaster.

Regarding the foreign lobby: they managed to get a law passed in 2015 that puts people in jail for up to three years for disagreeing with a certain version of history and discussing it. To understand how obscene this law is, three million Romanians were imprisoned on political grounds during the communist period, and 800,000 Romanians were murdered in work camps and prisons. There is no law preventing anybody from promoting communism, but there is a law that falsifies history and imprisons anybody who talks about it.

Another example is the Elie Wiesel Institute, which began a campaign of demolishing statues and monuments, changing the names of streets and buildings, anything related to national heroes who stood against communism — a campaign similar to what the leftists are doing in the States (Source). Other NGOs and publications aggressively promote an anti-Christian, anti-Orthodox church message, but at the same time are blatantly pro-Islamic.

The citizens are very disappointed by politics, so much so that in the parliamentary elections last December less than 40% came out to vote. Millions of young people have decided to go work abroad. Some do it for a better life; the less fortunate ones so they can feed their families. Although so many are working abroad, there is still an unemployment problem inside the country. The number of asylum requests has risen sharply this year, from 1,500 requests in 2016 to 3,000 requests in the first nine months of 2017 (Source), and there are no jobs that would justify bringing these people into the country.

While the citizens are being pushed further away from politics, tens (possibly hundreds) of NGOs have the money and access to politicians to push their own agenda. The aggressiveness of these groups has come to light recently, when three million signatories requested a referendum (for which a date is yet to be set) to amend the Constitution to state that the family is formed by a man and a woman, which these NGOs perceived as a threat to their agenda of legalizing gay marriage. These groups reacted with an endless wave of LGBT propaganda articles and news reports, full of insults to the signatories and their beliefs. I guess these groups are not used to not getting their way.

The push for censorship, the threat of jail for having the wrong opinions, the erasure/rewriting of history, the imposition of values contrary to one’s belief — these are problems Romanians, as well as citizens of many other countries, are threatened by. I would love to read insights from other people about what is going on in their countries, because reading what makes the international news doesn’t paint the full picture.

7 thoughts on “Resisting the Islamization of Romania”