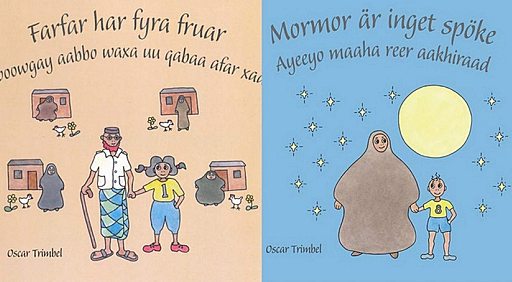 We’ve all heard about Heather, who has two mommies. And I assume Ingrid has something similar in Sweden. But Asli — who is also “Swedish”, in the Modern Multicultural Mode — has four mommies. And also, as it happens, a grandma in a bag.

FouseSquawk, who translated the following article about these wonderful new culture-enriching developments, has this to say by way of introduction:

Here’s another good one from Fria Tider. I actually heard about it the other day while talking to a friend in Sweden.

That’s the title of a new children’s book that is just hitting the shelves in Sweden. It is bilingual, Swedish and Somali, and targeted at a children’s audience between three and six years old. The writer is Oscar Trimbel. He is also the author of another new children’s book entitled (in Swedish) Grandma Is No Ghost (referring to her burka). The stories concern Somali-Swedish children meeting their Somali grandparents for the first time, and the cultural differences they see. There is quite a stir over the release of these books. The latter book is being criticized because many feel it is promoting polygamy among Swedish children who read the book.

By chance I was speaking over the phone with an acquaintance in Sweden who picked up a copy of the book at the Gothenburg book fair (second largest in the world). He said he actually met and spoke with the author, Trimbel, who told him the book was meant as a way to help Somali kids integrate into Sweden.

CULTURE NEWS. Two new children’s books have just been released in Sweden which include, among other things, polygamy and Muslim Somali culture. They are called “Grandfather has four wives” and “Grandmother is no ghost” and are aimed at very young children.

According to Social News , the association Somali Nordic Culture is selling the new children’s books at the Book Fair in Gothenburg.

The books are written by the author Oscar Trimbel.

“Grandmother is no ghost” is about Omar greeting his grandmother, who comes from Somalia.

Grandmother wears a full-covering dress but is no ghost.

“When it’s Halloween, Omar dresses like ghosts like any other child. He wants grandma to come along because it’s gonna be nasty,” the book is blurbed on Adlibris website.

The second children’s book, “Grandfather has four wives”, deals with polygamy. The front is adorned by a Muslim bearded man with his four wives in the background.

It tells about Asli who has never been to Somalia, “but now she will finally go there with her dad, to meet grandfather and all her grandmothers,” so says Adlibris.com.

“The book has already been ordered by libraries, and can therefore be assumed to be fact-checked in accordance with the guidelines of the Association of Libraries.” “Grandfather has four wives can also be ordered as a coloring book,” economist Tino Sanandaji writes sarcastically on his Facebook and points out that in the book “our children can be taught pedagogically about polygamy.”

The author Oscar Trimbel worked in the 1980s on behalf of Sida (Swedish International Development Cooperation Agency) in Somalia. He has, in the past, put out Somali folk songs and self-painted watercolors from his stay in the country.

The two books were published by the book publisher Book Machine in August this year. Appropriate reading age is reported to be three to six years.

13 thoughts on “Grandma Ain’t No Spook”