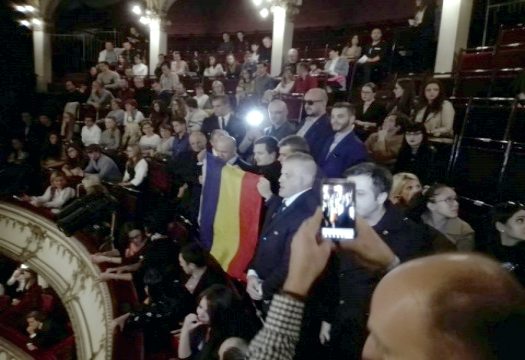 We reported last night on a multicultural opera from London that was imported into the city of Cluj in Romania and foisted on the population as an enlightening cultural experience. The performance included a muezzin yodeling the Muslim call to prayer, including the notorious call, “Allahu Akhbar!”

A number of Romanian patriots in attendance were not impressed with all the cultural enrichment, and voiced their opposition by singing the national anthem and unfurling a flag as soon as Allah made his presence known onstage. Needless to say, they were ushered out of the opera house by police.

Below is a video of the patriots’ protest, followed by a brief commentary from one of the participants as he was on his way out of the venue.

Many thanks to Stefan Cel Mare for the translation, and to Vlad Tepes for the subtitling:

24 thoughts on “A Night at the Opera”