Fjordman’s latest essay has been published by the Gatestone Institute. Some excerpts are below:

How Barcelona Became a Victim of the Barcelona Process

The Barcelona Process, promoted by the EU, has helped to facilitate a greater presence of Islam and Muslim immigrants in Western Europe — thereby also increasing the Islamic terror threat there. That result was perfectly foreseeable.

When the number of people who believe in Islamic Jihad doctrines rises, the likelihood of experiencing jihadist attacks increases as well. 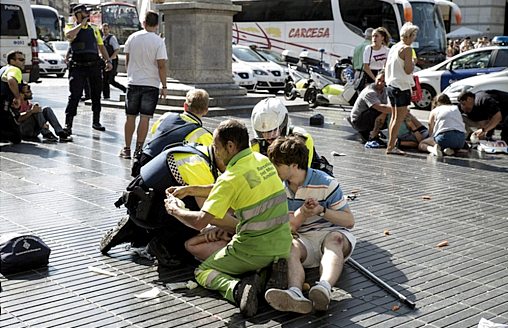 It is unlikely, though, that European political leaders will point to this connection. Doing so would be an indirect admission that Europe’s leaders have actively increased the Islamic terror threat against European citizens. This is the brutal truth they do not want exposed.

Western Europe’s appeasement of Islam stretches back at least to the 1970s.

With the 1973 oil embargo, Arab countries in the Organization of the Petroleum Exporting Countries (OPEC) used oil as a weapon and tool for blackmail. European countries started giving concessions to Arabs to ensure their oil supply and, they doubtless hoped, avoid terrorism. These concessions were not just limited to economic affairs. They also included opening Western Europe up to Islamic culture and Muslim immigration. The author Bat Ye’or has written extensively on this subject.

As part of the Euro-Arab Dialogue, a Euro-Mediterranean Partnership between the EU and the Arabic-Islamic world was launched in 1995 with the so-called Barcelona Process. Its purpose was to strengthen the ties between Europe and the Arab world in the fields of trade, economy, environment, energy, health, migration, education, social affairs and cultural cooperation.

This Process has been in force for decades. Despite it, the increasingly stronger ties between the EU and Arab Muslim countries rarely receive critical scrutiny from the European mass media. There is even a Union for the Mediterranean, which most Europeans have never heard of.

Read the rest at Gatestone.