You know you’re at a world peace meeting when you’re sitting next to a sheikh who advocates death for apostasy — after all, what could be more peaceful than a dead apostate?

The following report by Egri Nök was filed at Vlad Tepes in a slightly different form. 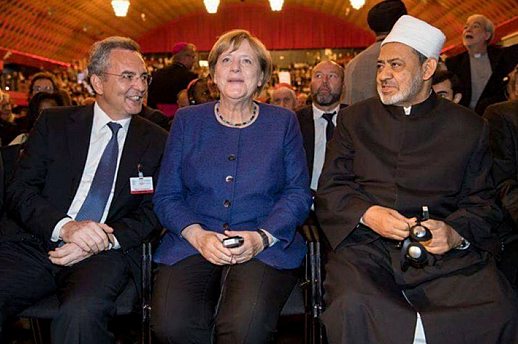 Angela Merkel opening a ‘World Peace Meeting’ in Münster, Germany, on September 10. The gentleman to her left is Sheikh of Al-Azhar Ahmad Al-Tayyeb.

Ahmad Al-Tayyeb explained on TV last year that the punishment for leaving Islam is death, and quite rightfully so:

According to Wikipedia, “He is considered to be one of the most moderate Sunni clerics in Egypt.”

The Wikipedia entry on Mr. Al Tayyeb, or alternative spelling El Tayeb, is quite worth reading.

An original translation of the dpa (Deutsche Presseagentur, German Press Agency) release on the event:

Münster (dpa/lnw) — The international World Peace Meeting is starting today in Münster, Westphalia, with prominent guests. Chancellor Angela Merkel (CDU), the president of the republic of Niger, Mahamadou Issoufou, and the president of the European Parliament, Antonio Tajani, will be speaking at the festive opening

The three-day event in the Cathedral cities Münster and Osnabrück intends to promote peace in the world. Its motto is “Paths to Peace”. Leading church and religious representatives and around 5,000 participants from all over the world are expected.

The international World Peace Meeting is organized by the Catholic community Sant’ Egidio, based in Rome. It takes place at a different location each year. For the first one, Pope John II asked religious leaders from all over the world to a World Peace Meeting in Assisi, Italy, in 1986.

17 thoughts on “Paths to Peace”