Below is the prepared text for a speech given today by Geert Wilders at the Ambrosetti conference at Villa d’Este, Italy. 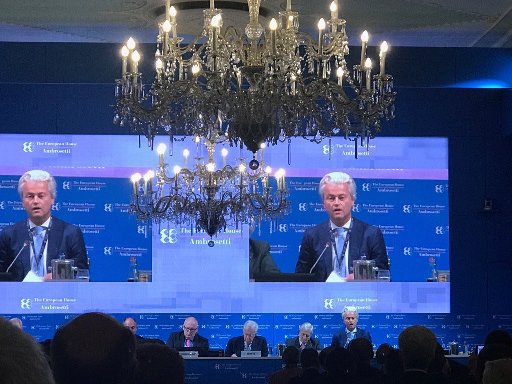 Thank you for having me here today. I applaud the fact that you invite someone who does not share your enthusiasm for the European Union. Or your European dream as Euro commissioner Frans Timmermans just called it. To be honest: his dream is my nightmare.

I realize that my views are different from those of the many members of the European establishment in our midst, but I am an optimist.

I believe in a positive future for Europe as a community of independent, sovereign and democratic nations — working together without a supranational political union — a Europe without the European Union.

I believe that true democracy can only exist and flourish within a nation state. National sovereignty combined with domestic culture gives us our identity. As does control over our own borders and budget and the right to decide how to use it ourselves as a nation.

Unfortunately, most of our governments have transferred ever more powers to the EU, undermining many important things we Dutch have achieved over the past centuries and hold very dear.

Our forefathers have fought for a democratic Netherlands. That is a Netherlands where the Dutch electorate and nobody else decides on Dutch matters. Democracy means that a people can decide its own legislation.

Democracy equals home rule. But owing to the transfer by our governments of powers to Brussels, the EU institutions and other countries are now deciding on issues which are vital to our nation state: our immigration policy, our monetary policy, our trade policy and many other issues.

A huge part of our legislation has been outsourced to Brussels. Our national parliaments have become implementing bodies of the EU. Many people object to that.

In the 2005 referendum, the Dutch voted against the European Constitution, but a few years later a slightly altered version under a new name was forced down our throats.

Last year, a large majority of the Dutch voted in a referendum against the EU Association Treaty with Ukraine, but the treaty was pushed through anyway. Very few people can still take the EU seriously as a democratic institution after experiencing this.

Another extremely important thing the Dutch have achieved over the past centuries were clear and defined borders. Borders are important. Because they protect us and define who and what we are. Thanks to our governments who gave away sovereignty, we are now no longer in charge of our immigration policy and even our own borders.

And the result is devastating.

If you give away the keys of your own house to someone who leaves the doors unlocked you should not be surprised when unwelcome guests force their way in. I believe every nation should be in charge of its own borders and decide themselves who is welcome and who is not. The Netherlands is the home of the Dutch people. It is the only home we have got. And we should regain control over its border and immigration policy.

One of these things we, Dutch, hold dear as well is our national identity. The Dutch have their own identity. And so do the other nations of Europe.

But there is NO single European identity.

The EU is characterized by cultural relativism and enmity towards patriotism. But patriotism is not a dangerous threat; it is something to be proud of.

It means defending a nation’ sovereignty and independence, and not selling it out in shabby compromises to the EU and its bureaucrats.

As Hungarian Prime Minister Viktor Orbán has said — I quote — “Europe is a community of Christian, free and independent nations. The main danger to Europe’s future comes from the fanatics of internationalism in Brussels. We shall not allow them to force upon us the bitter fruit of their cosmopolitan immigration policy.” End of quote.

The European Commission has recently started procedures against Poland, Hungary and the Czech Republic because they refuses to take in immigrants. Two years ago, Mrs Merkel invited millions of immigrants to come to Germany.

A historic mistake. She didn’t just let millions in; her policy encouraged them.

Her “Wir schaffen das — We can do it” call was one of the greatest pull factors in Europe’s migrant crisis. It is impossible to preserve your identity if you are inundated with millions of newcomers from an entirely different culture. A culture that — as is the case with the Islamic culture — aims to dominate and refuses to assimilate.

The EU resembles a cartel of governments dominated by Germany and France. These two powerful nations decide almost everything.

But the Poles, the Hungarians, the Dutch, the Italians — they did not elect Mrs Merkel, nor did they elect Mr Macron.

Out of the 13 parties in Lower House of Parliament of The Netherlands we are no. 2 now for the first time ever. And next time we will be no. 1.

Another thing we Dutch hold dear is our safety and security. In our streets today, as in many other European cities, we can see what the EU together with pro-EU national leaders have brought us. We are confronted in our inner cities with places that no longer look and feel like the Netherlands, and where Dutch people are no longer safe. We have people in our country who were born in our country, but who do not share our basic values, and it even gets worse.

Terrorists have entered Europe among the flow of immigrants which the EU and the national governments allowed in. Meanwhile, home-grown terrorists are already one of the biggest problems our nations are currently facing. There are thousands of them, all over Europe, able to travel around unhindered and strike wherever they want.

This morning in a Belgian newspaper the European anti-terrorism coordinator Gilles de Kerckhove says that there are 50,000 radical Muslims in Europe today. They can commit a terror attack any moment, as has already happened so many times recently.

Brussels together with the pro-EU leaders in the national capitals created the conditions that made these horrible events and attacks possible by allowing millions of immigrants to enter Europe — often unchecked, by making no assimilation demands whatsoever, by refusing to impose a leitkultur, a dominant culture, by being politically correct and because of a total lack of leadership.

In my office in The Hague, there is a huge portrait of Sir Winston Churchill. In 1946, he gave a speech advocating what he called — I quote — “a kind of United States of Europe.” But by this, he did not mean at all what the Europhiles meant. He referred to the British Commonwealth as an example: a loose federation of nations, economically cooperating and bound by a set of principles.

But when he became Prime Minister in the 1950s, Churchill did not apply for membership of the precursor of the EU. He was horrified by the idea of giving up national sovereignty. Because he knew that this would lead to the end of democracy, identity and safety for his people.

And neither does the EU care much about the preservation of the Judeo-Christian culture.

On the contrary, it facilitates Islamization.

Our European civilization, based on the legacy of Jerusalem, Athens and Rome, is the best civilization on earth. It gave us democracy, freedom, equality before the law, the separation of church and state, and the notion of sovereign states to protect it all. The remedy to all the misery and terror is clear: We have to reassert what we are. Only then will we be able to ensure a future for our children in a safe, strong and free Europe.

The problems Europe faces today are existential. Not economics but Islamisation, terrorism and mass-immigration are our main problems. Existential indeed, it determines who we are, what we are and if we will exist as free people in the future.

I believe in free speech. I pay a very heavy price for it. I am on the death list of Al-Qaeda, the Pakistani Taliban and other Islamic groups. I live in a safe house provided by the Dutch state and I have been under 24/7 police protection for 13 years now. Everyone is entitled to his or her opinion. So am I.

And I think that Islamization is the greatest threat to our European future. I am not talking about all individual Muslims, many of whom are moderates, but I am talking about the Islamic ideology which is incompatible with freedom and democracy and that we are importing massively.

The European Commission voices its concern about the so-called threat to democracy in countries like Poland and Hungary, but it totally ignores the devastating effect Islamization has on the security and freedom of Europe.

For all these reasons — protection of our democracy, our borders, our identity, our safety and our freedom — we want a Europe without the EU. Sovereign democratic nations are perfectly capable of working together where there are common interests — without needing a supranational political institutional like the EU.

But, despite all the bad news, as I said at the beginning, I am an optimist. All over Europe, ever more people are becoming proud patriots.

And know that the patriots will win. And so will the nation-state.

Nations that of course will be willing to work together closely where they see a common interest. There is nothing wrong with economical cooperation, on the contrary. We can also work together to fight terrorism. But all on a voluntary basis, as sovereign nations.

And without a political union. Without the EU.

The future belongs to the Europe of sovereign nations.

13 thoughts on “Geert Wilders in Italy: “The Future Belongs to the Europe of Sovereign Nations””