I find the following article from Barcelona more disturbing than any photos of run-over or blown-up corpses or any other scenes of jihad carnage. Those horrific images represent the death of one, or a dozen, or a hundred people, but the story below represents the death of an entire civilization.

The grieving father interviewed by the newspaper reacted to his little boy’s death with totally orthodox multicultural political correctness. His public response underscores the extent to which a collective suicidal madness has entrenched itself in the West.

Pampasnasturtium, who translated the piece, includes these notes:

Note 1: I don’t know what they mean by “boxes” on the last paragraph — I double-checked the same piece in the Catalan edition, but they use “boxes” the same way. It could be local slang for coffins, I suppose.

The translated article from El Periódico:

Father of Xavi, the 3-year old child dead on the Rambla: “I need to hug a Muslim”

He had to comfort the weeping deputy-imam of Rubí 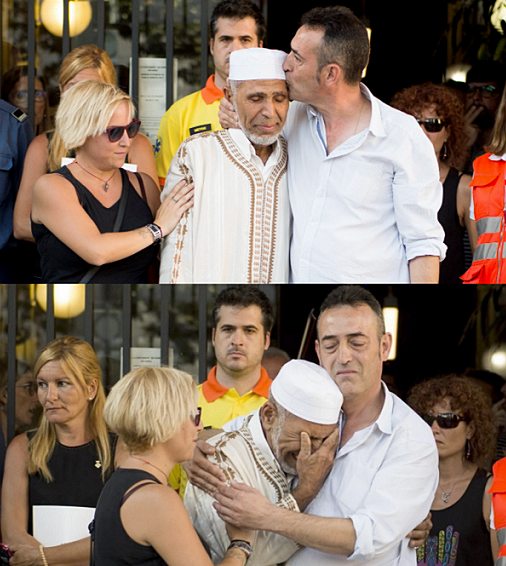 [Caption] Javier Martínez, father of Xavi, and Silvia, the mother of the three-year old victim of the attack on the Ramblas, moved with emotion next to imam Driss Sallym in Rubí.

Javier Martínez, the father of Xavi, the 3-year old child who died on the Rambla, receives an El Periódico correspondent with the dignity of those who need to tell their story. He’s with his family: his parents, his sister and his two daughters; one of whom, Marina, was strolling together with her brother Xavi and uncle Paco the day of the terrorist attack.

He wants to make his gratitude very clear: “Thanks to all. I love to see that the Rambla has gone back to being full [of people] again. Let there not be fear.” He received direct messages of support these days: from Rubí’s [female] mayor, from Llimiana’s mayor, where they holiday, and from the Royal House. Today, Thursday, a week after the attacks, is the first day that a psychologist goes to their house to assist them personally.

Javier has recently come to know that an agent of the Guardia Urbana [municipal police force of the city — translator] tried to revive his son with a defibrillator from a pharmacy on the Rambla. When the agent saw no ambulance coming, he got the child into his patrol car and took him to the Peracamps CAP [First Aid/Emergency Public Medical Center]. That’s why Javier is so thankful towards all the security forces, especially towards the Mossos [the police force of Catalonia — translator], who helped speed up the process of moving the child’s body to Rubí from the Ciutat de la Justícia [judiciary district]. “They’re one of the best police forces in the world,” he says.

On Javier’s face there’s not a single sign of hard feelings, of hate. “I know there’s another kid dead. I couldn’t meet anyone else, but I share the pain with them. With everyone. I also share the pain with the relatives of the terrorists. I share it. We’re persons. We’re truly, truly, truly, truly persons [repeated four times in the original — translator]. I’m not talking as if I were on drugs. I don’t take any kind of pills: I don’t need them. I’m speaking from my heart.”

Xavi’s father wants “my son’s death to have a purpose.” He explains it while appealing to the welcoming nature that Catalonia has historically had. To the alliance of civilizations. “I need to hug a Muslim. Let those people not be afraid. I need to do it.” Hours after uttering this phrase, Javier comforted with a hug the weeping deputy-imam of Rubí, Driss Sally.

“What happened during the ramming I cannot say. Only Silvia, Xavi’s mother, saw it. They published things like that Uncle Paco pushed the baby-buggy, or that the baby fell to the floor… mere speculations. It can’t be known, because the wounds Xavi had, his blow on the head, it was not from falling from a buggy. He ended in the midst of some bikes. He was surely mown down.”

When Javier first found out of the attack via his ex-wife, Silvia, who was taking a walk with Xavi and Paco, he took a cab to the Rambla because he couldn’t drive: “My legs were shaking”. There a Mosso helped him get to the CAP. A “tall, young” doctor told him that, although Xavi had a pulse, he wasn’t reacting after twenty minutes of resuscitation. From there they went to the Hospital de Sant Pau, and thence home, already knowing the worst thing.

The bodies would be taken to the Ciutat de la Justícia, where until Saturday the 19th of August Javier couldn’t take Xavi back home. Before that, and after choosing the boxes, they could identify the bodies of Xavi and Paco. To the [female] forensic doctor, Javier said: “Know that you’ve just performed autopsy on an angel.”