As we reported yesterday, the pro-Trump rally in Denver on Saturday March 4 was attended, but not disrupted, by European-style Antifas, or “anti-fascists”. Similar “March 4” rallies were held across the country, and Antifa groups — dressed in the same hip grungy black-masked outfits, carrying the same flags and banners — showed up at many of the other ones. These groups had no noticeable presence in the United States before Inauguration Day, and now they are being deployed everywhere to counter with their menacing presence any support for President Trump.

It’s as if they sprang into existence fully-formed, like Athena from the head of Zeus. Such uniformity of appearance and simultaneous deployments at multiple locations are further evidence that the entire operation is being funded, controlled, and coordinated internationally on both sides of the Atlantic.

The report below was sent in by an observer of the March 4th Trump Rally and Antifa protest in Nashville, Tennessee. 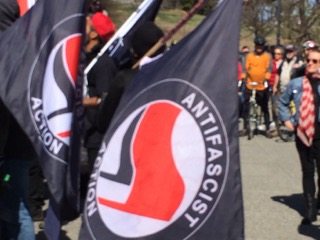 I arrived downtown at the Public Library about 10:30, parked and walked north on 6th Ave to Deadrick. There were a number of people headed for the Trump Rally, but when I went east on Deadrick towards the Court House, the Antifa meeting place, there were only a few people and they were headed uptown toward the rally at the Plaza. 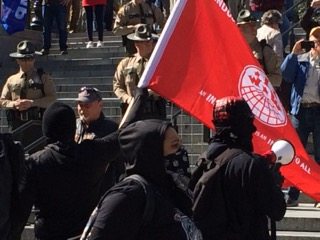 At a block away from the Courthouse, I could see a small number of people standing on the perimeter of the Courthouse plaza and some others behind them. They were in dark hoodies and had scarves around their faces. I walked down the side of the courthouse and counted about 25 people who got into a formation. Then someone gave a signal and they raised their Antifa flags and marched up the hill toward Legislative Plaza. Around the corner came eight motorcycle cops who followed them. I stayed a block behind them. 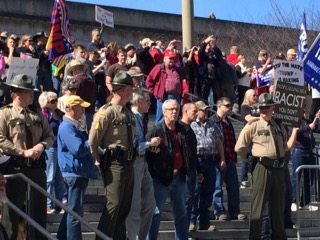 When we got to the bottom of the Plaza steps on the east side, there was a line of state trooper cars with their blue lights on. The troopers formed a whole row across the steps, moving aside for rally-goers to get up. With them and below them on the steps were a row of Trump activists (see photo below) with signs and one guy on a bull horn who also held an anti-abortion sign. (he was there the whole time, talking back to Antifa, calling them cowards for not showing their faces, telling them they would be judged by God for their deeds, and leading USA, USA chants. There was a group of disgruntled veterans who stood on the sidewalk, blocking Antifa on their right. 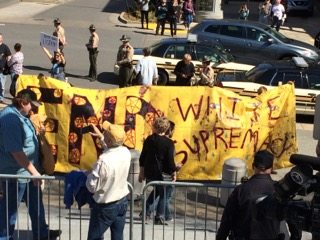 The Antifa shouted back using two bullhorns. And of course they had their Antifa and International Workers of the World flags and signs like “Resist and replace capitalism.” The best sign was “End White Supremacy”, held up by three white people. So the whole time the rally was going on (staged on the North with the Capitol in the background) the activists on both sides were yelling at each other non-stop. Because of the steps and the layout of the War Memorial/Plaza, if you were at the Trump rally, you couldn’t hear Antifa and their nasty words: “F*** you, Trump pieces of s***,” etc. 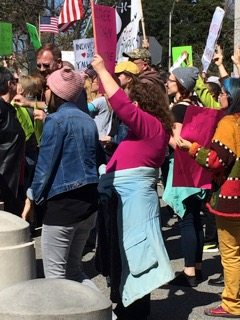 I don’t think Antifa expected that much resistance. About 12:15 or so they called in fresh meat. Here came the LGBT crowd, a few blacks and a feminist in a pink pussy hat. One of the Antifa crowd was Hispanic who thought because she had brown skin, all the Trump people were bigots and hated her. She was masked and said she didn’t have a name. She was “Anonymous”. Most of the Antifa were young, college-age. Later their recruits were older and had bad homemade signs: like “All we need is love”. The total number of Antifa and their cohorts, maybe 60-75 max. There were too many Trump people to count, an estimate of 1,500 – 2,000. 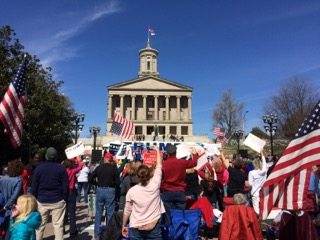 One of the Antifanistas stole some Trump tee-shirts and dumped them in the garbage but was arrested for theft and another was arrested for disorderly conduct. I have never seen so many law enforcement since civil rights marches — tons of troopers, their cars, motorcycle cops, cop cars, and even a helicopter flew over periodically. Mayor Barry didn’t want Music City to be national news, and she spent a fortune for a show of force. 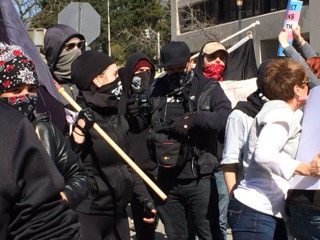 I made recordings with my phone, but there was so much background noise, the audio is almost useless. Which is too bad, because I recorded a guy who had a conversation with one of the Antifa protesters from Spring Hill. He’s a gay activist and a real piece of work, with the foulest mouth you’ve ever heard. He said that the government must be overthrown by force. Force is the only thing that will work! 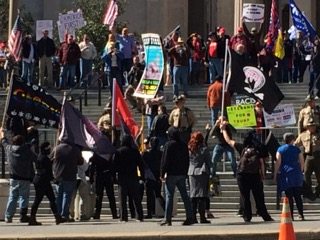 All in all, I would say $oros is going to have to shell out for a better quality and a larger quantity of protesters here in Music City. Their goal was to disrupt the rally for Trump, and it didn’t happen. In fact, they were overwhelmed and out-shouted, and ended up breaking ranks and chatting with anyone who would talk to them. These guys were pathetic.