Our Dutch correspondent H. Numan reported last month that Geert Wilders’ security detail had been compromised by corrupt and criminal culture-enrichers of Moroccan descent. Since then, as mentioned in last week’s news feed, the responsibility for his security has been assigned to a different, less enriched, outfit. Below is H. Numan’s follow-up report. 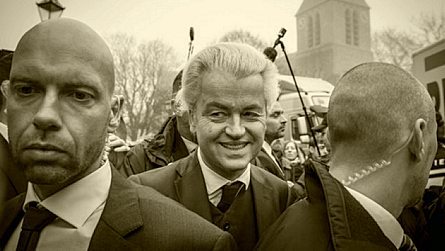 The tasks of the Marechaussee are varied. When you enter the country, your passport is checked by a Marechaussee. On of their tasks is border control. Possibly you see an armored car of the Dutch state bank accompanied by an armed escort of the Marechaussee. Or — hopefully not — you see the riot police in action. Many of them will be Marechaussees. More likely you see a regular police officer walking the beat with a Marechaussee next to him. Another task is to support local police, if they haven’t got enough officers themselves. Of course it is also military police, though it’s not their most important task. Stands to reason: we barely have an army…

After the hijackings of Wijster and De Punt in 1975 and 1977 the government seriously upgraded anti-terrorist units. Amongst others the BSB was formed. This is a very serious unit, trained together with the British SAS and German GSG 9. Unlike the SAS and GSG 9, all BSB officers are sworn police officers first and foremost. The BSB was deployed to protect the investigation team sent to the Ukraine when the Malaysian Airlines MH17 was shot down. They worked in Iraq and Afghanistan to provide serious protection to high-risk targets.

Now that the DBB (Dienst Bewaken en Beveiligen, the protection service previously assigned to Wilders) has been rocked by scandals, the government finally gave Wilders the protection he needs. Wilders’ protection is world news at moment. The eyes of the world are focused on him. We already ‘mysteriously’ lost one prime minister the evening before he was elected. The government cannot afford another political murder. I’m pretty sure this protection is a lot more expensive, but you get what you pay for. These guys are serious business. Very serious.

Wilders didn’t believe the government’s assurances that he wasn’t in any danger. He canceled all his campaigning immediately, until his security was certain. Now that the government has employed the BSB he feels secure again, and is once more on the campaign trail. Being protected by the BSB is as safe as one can get. There is no 100% security. The same as for unsinkable ships: nothing is 100% safe. That’s why I titled this article safe(r), not safe.

6 thoughts on “Geert Wilders is Safe(r)”