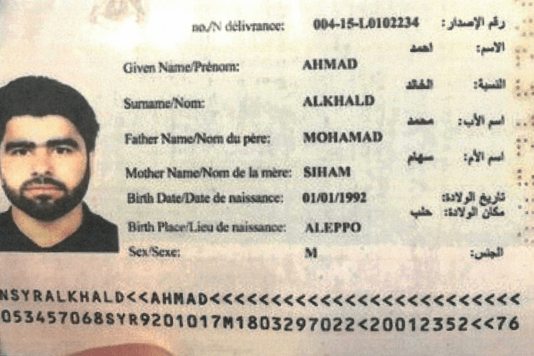 A series of terror attacks took place in Belgium and France in 2015 and 2016. Below is a report on the only major conspirator among the planners of those attacks who still remains at large, a Syrian by the name of Ahmad Alkhald.

Many thanks to Ava Lon for translating this article from La Dernière Heure:

This is the man who trained the Belgian suicide bombers

Ahmad Alkhald is the only major figure responsible for the attacks in Paris to have fled Europe successfully.

Since November 2016 he has been the subject of an international arrest warrant issued by France. Known under the identity — certainly false — of Ahmad Alkhald, born on 1 January 1992, he is of particular interest to Belgian and French investigators for his role in the organization of the Paris attacks, and perhaps those of Brussels. To date, he is the only major player in these events to have managed to escape. He is also known by the name of Yassine Noure, born on July 18, 1983, or under the name of Mahmoud.

The role of Ahmad Alkhald is known today mainly thanks to the testimony of Osama Krayem, the Swede of Syrian origin who was indicted during the investigation of the attacks in Brussels. This man, still in detention in Belgium and also investigated in connection with the Paris bombings, told police officers that Alkhald was a Syrian national, specifically from the Aleppo area.

French and Belgian investigators conjecture that he, along with the suicide bomber Zaventem Najim Laachraoui, is one of the important architects of the attacks of November 13 2015 in Paris and Saint-Denis. His DNA was found on two explosive belts, the one that Salah Abdeslam threw in a garbage can in Montrouge and the one that his brother Brahim wore when he killed himself at the Comptoir Voltaire on the night of the attacks.

In the same way, his DNA was found in two Belgian terrorist hideouts, one in the rue du Fort, in Charleroi, and the other in the rue Radache in Auvelais.

Ahmad Alkhald entered Europe via the flow of migrants to the island of Leros on September 20, 2015, together with Osama Krayem. With false Syrian identity documents, they arrived in Ulm, Germany. On October 3 they were put into the care of Salah Abdeslam, accompanied by a third man, Soufiane Ayari, arrested on March 18, 2016 at the same time as Salah Abdeslam.

Abdeslam then entrusted him with a false Belgian identity card in the name of Yassine Noure, made in the famous forgery workshop in Saint-Gilles, from which all the false documents came for the network of terrorists who struck in France and Belgium.

Alkhald then went to live in Belgium with his new comrades. He remained there during the attacks, accompanied by the Belgian Najim Laachraoui, also a planner and manufacturer of the explosive belts of the suicide bombers of November 13, 2015. According to Osama Krayem, they prepared the explosives together.

It is now proven that after the attacks in Paris, Alkhald managed to leave Europe. On November 16, 2015, three days after the attack, he was on a Vienna-Ankara flight with a stopover in Istanbul. He had a Hungarian telephone number. On November 1, 2015, he was also screened by the Hungarian police on the Vienna-Belgrade train. He said he was returning from Ulm and wanted to go to Turkey, the investigation reported.

Investigators recently managed to prove that the so-called Ahmad Alkhald was able to play a role in the Brussels attacks. Indeed, the French and Belgian sleuths consider that he could be a certain Mahmoud, of whom Najim Laachraoui asks advice on explosives in an audio message intended to be listened to in Raqqa (Syria), and found later on the laptop of the terrorists, in a trash can, not far from their last hiding place in Max Roos Street in Schaerbeek, on the day of the attacks at Zaventem and the Maelbeek metro.

Where is he today? Impossible to say. Perhaps he was killed in a bombardment or in fighting. It is clear that Ahmad Alkhald has entered Syria and joined the Islamic state. He is, to date, the only major player in these terrorist networks to have escaped.

One thought on “Looking for Ahmad Alkhald”