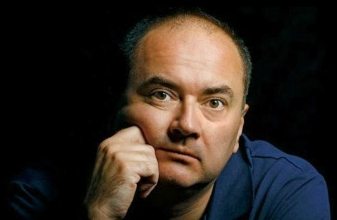 The following interview with a liberal-minded Pole who converted to Islam some years ago was published recently at EuroIslam.pl. Some excerpts:

We Are Afraid Modernity Might Kill Allah: Interview With Polish Muslim Liberal

Let’s start by asking how a guy like you — quite a partygoer — becomes a Polish Muslim?

Not so long ago, on the gate of a Swiss embassy I saw posters done by some Swiss artist. One of them showed an image of a rebellious youngster from the 70s — a punk; but a rebellious youngster in the 2000s is a bearded European guy with a gun who converted to Islam, became a Jihadi. Nowadays many people really do convert to Islam to overcome their frustrations. But why others, not just crazies and frustrated people, decide to become Muslim? It’s hard to say, it’s very personal, every religion is. I converted about 16 years ago, for spiritual reasons. My Islam is totally different now than it was at the beginning. I came a long way from a neophyte to a Muslim liberal.

Why don’t you try and convert our readers, tell us what is so cool about Islam, what was it that attracted you? And why Islam and not Buddhism or Catholic Youth movement or yoga?

I never try to convert anyone, proselytism is completely alien to me. Why did I choose Islam? I don’t know. Christianity has always been very strong in my family; it was something that I was forced into and I haven’t got any nice memories from that period — going to church, or being morally oppressed by the religion. I have been keen on various religions since I was a child. I was reading scripture and books and it just clicked. Perhaps it was also because of my frustrations, I needed a religion that would bring order into my life. I was of course drinking and behaving badly, I wasn’t using many drugs, marijuana more so. I felt lost.

If I was to advertise Islam…It’s an all-day, holistic system that totally regulates the life of a person who is serious about it. And converts do treat their new religion really seriously; I was the same. The converts start living in accordance to a certain religious schedule, in accordance to prayers for example. They come in, very strongly into haram and halal zone, that is, into what’s forbidden and what’s not. Many people stop drinking or eating one thing but start eating something else. Touch this, don’t touch that and this puts a person into a rhythm; rhythm of dogmas which in my opinion, calms the new convert a lot. And I think most of them are quite happy with that.

Yes, it’s putting the feeling of being lost, the chaos, or anarchy in their minds, heart or life, back in order. No other religion, I believe, regulates so much the way people dress, what they eat and how they should have sex. This is something that attracts many people. There’s also the question of power. In this religion, the element of power, certain kind of violence — not only in the negative way but also in a way of reacting to itself, to the believer and to others — is very important. This power, its dynamics is transmitted to the convert. He feels very powerful, feels the backup of the community, which, right now, amounts to about a million and a half; the community where the word of god is preached where it is considered as the only one, the dominant one; the word of god that has been chosen and prophesied to be the future of the world. One feels that one enters a very strong community. Although there is a division in Islam, it is a different kind of community than a Christian one. Christianity, with few exceptions is very smooth, sluggish, liberal and democratic. Islam is like an army, because it’s a religion that is based on battle. This battle, this jihad — in a broad sense — is yet another element which by some people going to Syria is understood only in one way — as killing infidels. However, the battle with oneself, the soft version of jihad, is very important for the converts, and that element isn’t present in Christianity.

Next thing — sex. Many people think that extramarital sex is forbidden in Islam but sex itself is very much present in Islam. It’s hard to grasp it but this domination of man over woman, this patriarchal system which has been present in Islam from its very beginning, it’s very attractive for young, frustrated, often not too handsome guys. I remember that — these were experiences of my fellow converts. There were a lot of guys who struggled with these things. If a guy is unattractive, small and has no girlfriend then if he grows a beard, if he surrounds himself with bunch of other guys who constantly say that a woman is inferior, that she’s weaker and needs to be dominated, this builds him up. Some neophytes who wish to go to Syria are lured by the vision of getting sex slaves and concubines, and all those women they will rule over, as it says in the Quran. Also, it’s hard not to underestimate the vision of constant afterlife of sexual pleasures with beautiful virgins, after all it’s something that God has promised.

What in this case attracts women?

We must remember the spiritual side and the faith the converts put in God — there are those who choose the Sufi Islam — these are gentle people, and I know them, too. It’s mystical Islam, it’s not dangerous, it’s non-invasive. Apart from this spiritual aspect, women often convert to Islam because of their Muslim husbands or his family, especially if they are going to live there. They want to feel good, dress up as Muslim women do, not to be the object of interest of other men because a woman believes that if she covers herself up in jellabiya or hijab she usually is safe, no more subject to attacks, unwanted touching etc. although some women do have a certain inclination towards submission.

The word “Islam” means to surrender. It’s a mystical, spiritual surrendering to God. It also depends on how we understand God, it can be a very beautiful thing. However, a large group of converts treat this act of surrender as an act of giving up thinking, critical thinking, and relying on a deity, dogmas and a huge army of believers who act according to those dogmas. It’s an act of joining the brotherhood. And women who feel that “they don’t belong” in a modern world, they have this element present — the element of surrendering to a man, a man who is supposed to provide for everything, whose duty is to provide food for the family, give shelter, take care of the financial side of life. It attracts many women. Apart from of course, I must stress this, natural religious and spiritual needs.

Your Islam is different now — as you said, it’s liberal. Can you say something about this initial period and how come you didn’t go to Syria?

What was my path? I’m quite an open person, always have been. I have been reading books ever since I was a child and the more I grow the more difficult topics I try to tackle. I have studied philosophy, only for my own pleasure, not as a potential profession. I think visiting Egypt played quite a large part in this evolution. Back then my views were not orthodox, but they were conservative and I thought I would find a world of my own there, a world for me and my family. What I saw was something that I could describe as a realistic socialism — a realistic Islam.

Even before the first revolution I saw something that was not my Islam, something that didn’t belong to my spirituality, my mentality, or to what I was accustomed to, something that didn’t relate in any way to how I perceived the world. It’s because I’m a man who has a European mentality, mentality of the West, which of course does not prevent me from accepting any sort of spirituality or religion of the East or Islam. However, the Western way of perceiving world — democratic, open, based on ideas of the age of enlightenment — it clashes with Islam, with the mainstream Islam. There is no connection. It’s like vinegar and alcohol, they may seem similar but they won’t ever meet. Besides, me, a fan of Gombrowicz’s work [a Polish satirist] — I can’t read Gombrowicz and at the same time be a Polish Muslim conservative, can I? (laughing).

Mainstream Islam’s ideas do not at all correlate — in any way, or at least in almost any way — to the Western way of thinking. They do not fit the Western intellectual who I consider myself to be. Although it’s not always like that: Heidegger was a fascist, and so were many other intellectuals and in our country, many great intellectuals were communists.

But eventually they have woken up.

They have woken up but maybe they were just lying to themselves. I was also doing that — in many things that concerned Islam I was lying to myself, I had this wishful thinking I just wanted it to be like this. Many converts are like that too. Somewhere deep inside I felt it’s not like that but all the doubts were being swept away under the carpet because a Muslim should behave like this or like that and should live according to Islam. However, I had this feeling inside me that it clashes with my liberal, democratic way of perceiving the world.

Read the rest at EuroIslam.pl.

51 thoughts on ““We Are Afraid Modernity Might Kill Allah””