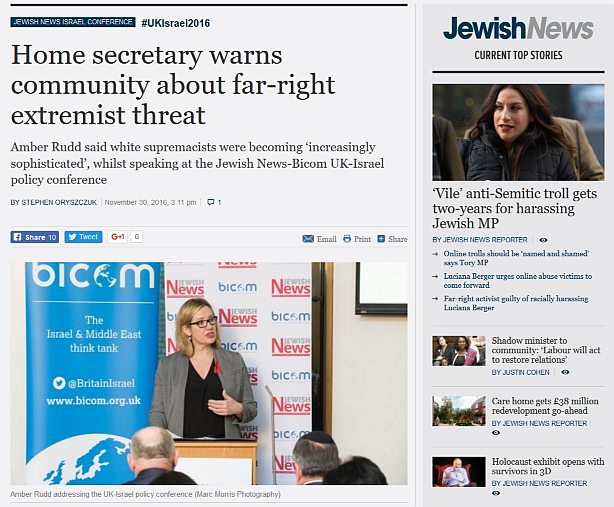 The rise of Islam in Britain and the submission before it by the government and media establishment has bought about a catastrophic situation which must, apparently, be kept from the British public at all costs — no matter the obvious lies, obvious disinformation and obvious propaganda this fantasy entails.

There was an extraordinary story earlier this week suggesting all Jewish schools, nurseries and synagogues will be given government funded guards following an increase in anti-Semitic attacks and threats. Home Secretary Amber Rudd announced this most chilling development in a speech at the Jewish News-BICOM Policy Conference at Westminster on Tuesday.

The idea that Jewish nursery schools require government protection in Britain is something beyond the comprehension of all civilised people. That it is sadly the case in 2016 should really be headline news not just nationally but internationally. Questions should be asked at the very highest levels, investigations conducted and firm action taken to halt this terrifying descent into barbarianism.

But the BBC and The Guardian seem to have missed this enormous story. I spent some time trying to find a mention of it, but my only reward was to unearth any number of stories about post-Brexit hate crimes aimed at various strands of the protected classes — i.e. everybody not a white, Christian, heterosexual male.

I find this omission rather surprising, given Amber Rudd’s insistence that the rise of anti-Semitism in Britain has little to do with Islam and more to do with far-right nationalist groups which would usually be the ideal anti right-wing scare story for the “impartial” BBC which has nailed its quisling colours firmly to the Islamic mast. Sorry, veered off there for a moment, just had to mention my contempt for the BBC… getting back on track, Amber Rudd stated:

“Far right and extreme right wing groups have become increasingly sophisticated in the use of social media for promotion and recruitment, and currently around a quarter of the cases getting support through Channel, part of our Prevent programme, are for extreme right wing radicalisation.”

She then wheeled out the actions of Thomas Mair, the psychotic killer of Jo Cox MP, as an example of far-right terrorism. This is disingenuous at best and chillingly propagandist at worst. Mair does not represent mainstream “right-wing” groups at all. To suggest he does is simply a distortion of truth and reality. One can only assume labelling him as far-right whilst also labelling Liberty GB, Geert Wilders, and Robert Spencer etc as far-right, is being done purely to discredit those who dare to tell the truth about Islam.

I remember the EU report on anti-Semitism in France a few years ago, carried out in the prejudiced and bigoted belief that white “far-right” French youths were behind the violence. When it transpired Islam was the main driver, the report was shelved. I would suggest Home Secretary Amber Rudd is adhering to the same sort of utterly dishonest propaganda here as well, couched in the sort of vapid, gobbledygook, PC Newspeak so beloved of the Traitor Class, quote:

“In Britain… there is no place for hatred, no place for racist or religious hate crimes, and we will not ignore the threat to any community in this country. We are the sum of all our parts — a proud, diverse society. We must come together, and stand united against those who would use hate to divide us.”

Britain’s witless Home Secretary should consider a number of points here. First, ignoring Islam’s contribution to anti-Semitism is hardly going to stop it from happening, is it? Nor is dishonestly and divisibly trying to pin the blame on the “far-right” going to make for a happy and cohesive society. In point of fact, if the half-witted woman really wanted to “stand united against those who would use hate to divide us” she would do well to ally herself with the “far right” and actually do something about the venomous hatred aimed at Jews and Christians alike, which is spewed forth around the clock in countless Saudi funded mosques the length and breadth of Britain.

And it is futile, utterly futile, to blather on about our “proud diverse society” coupled with “there is no place in Britain for racist or religious hate crimes…” when in reality religious hate crime exists within the Koran — and as a result exists on the streets of 21st century multicultural Britain — so no matter how much Ms Rudd wishes it not be so, this religious hatred exists purely because of our diverse society, not in spite of it.

So here we go again, trying to speak truth to power. Islam is the main driver of anti-Semitism in Britain (along with Jeremy Corbyn’s friends, of course) and not the “far right.” When she attempts to portray the absolute opposite of this truth, she does no favours for the Jews, no favours for society, no favours for future peace and goodwill, and indeed no favours for Islam which will become more and more hated if its adherents refuse to behave themselves in a civilised manner — but who have no incentive to do so, because the Traitor Class is more interested in bashing the right than politely asking Islam to adopt the preconditions necessary for living peacefully alongside non-Muslims in a modern, liberal democracy.

It is not just the cowardice and ignorance of Western politicians like Amber Rudd I find so soul destroying, it is their attacks on the good, moral, decent people who peacefully protest about the supremacist ideology of political Islam that really strikes a nerve. Particularly so when the likes of Rudd are prepared to deliberately lie in order to smear decent people as “far-right” even as they go out of their way to protect an ideology that is as genuinely far-right as the Nazi Party was in its attitudes toward Jews, women, homosexuals, global supremacy, violence, terror and a hatred for all those not of the “faith” be they the infidel or the Untermenschen.

Her attempts to defend evil whilst attacking good is very dangerous. I appreciate she is a tawdry career politician rather than a conviction politician, but I’m sure she must sense the political winds are changing and that truth, morality and reality are starting to prevail over evil, disingenuous and fantastical propaganda.

Or to put it more bluntly Ms Rudd, stop lying! Stop endangering your people and your country. Start doing the right thing instead. Not only will history judge you, future political leaders of Britain will judge you far sooner. Do you really not understand what sort of country Britain is turning into as a result of your professed love of diversity? Do you really believe that a Britain devoid of Muslims would need guards for Jewish nurseries? Do you really believe said guards are needed in 2016 Britain because of people and parties like Liberty GB? We exist only as a result of your betrayal of your country, decency and truth. Can you really not understand this? When will you finally begin to realise that all decent people now think of you and your ilk as the Traitor Class?