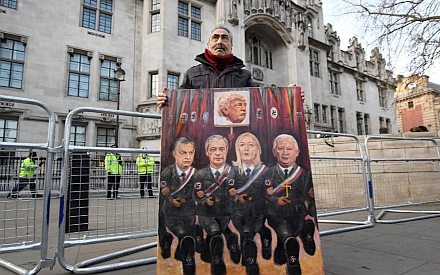 The Reductio ad Hitlerum (see also Godwin’s Law) has been a standard tactic of argumentation by left-leaning folks for a number of decades. Ever since the presidency of George W. Bush — and perhaps going all the way back to Ronald Reagan — it has been the primary method of dealing with any opinions even slightly to the right of those held by the people who employ it.

With the election of Donald Trump, the lefties are falling all over themselves to validate Godwin’s Law whenever they possibly can. If Nigel Farage was the Political Figure Most Often Depicted as a Nazi in 2016, surely Mr. Trump will win that coveted prize for 2017.

The following article from Poland describes a recent outburst of the Screaming Nazi Heeber-Jeebers in front of the Supreme Court in London, during a demonstration against Brexit by Bremainers. An artist name Kaya Mar displayed a painting of Viktor Orbán, Nigel Farage, Marine Le Pen, and Jaroslav Kaczynski dressed in Nazi uniforms underneath the grim visage of their Führer, Donald Trump. Just in case you don’t get it, the artist has painted swastikas on the soles of the goose-steppers’ boots.

This is leftist political iconography at its most subtle. One can only marvel at the artist’s skill and ingenuity.

The artist himself is an exemplar of what the European Union stands for. There’s no Wikipedia entry for him, but according to this blog entry, Mr. Mar was “[b]orn to Spanish parents in Istanbul he has lived in Turkey, France and then London”.

Many thanks to Ava Lon for translating this brief article from the Polish news portal Dziennik.pl:

Shocking poster by an opponent of Brexit. Kaczynski, Orban and Farage in Nazi uniforms

The British Supreme Court must decide whether the implementation of Brexit needs parliamentary approval. Supporters and opponents of remaining in the European Union appeared in front of the court. One of them, the artist Kaya Mar, had prepared a quite shocking poster.

On the poster Kaya Mar put the leaders of parties and countries that he accuses of destroying the European Union. So we see on it Jaroslav Kaczynski [leader of the Polish PiS — Law and Justice, conservative party], Viktor Orban, Nigel Farage, and Marine Le Pen, dressed in Nazi uniforms. The chairman of Law and Justice also wears a necklace with a large gold swastika. Behind them, in the midst of swastikas, hangs a poster of Donald Trump.

This is a protest by the artist Kaya Mar against Britain’s leaving the European Union. Both he and other opponents of Brexit are hoping that the Supreme Court will rule that Parliament should have the last word in this matter, since MPs can vote differently than the British electorate in the referendum.