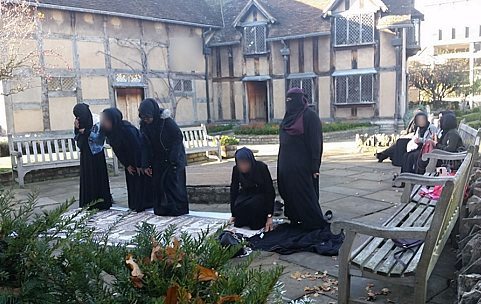 Most people in the Anglosphere know that William Shakespeare was born in the town of Stratford-upon-Avon. Or at least they used to know it — given that he’s a dead WASP, it may well be that children don’t learn much about the Bard nowadays in school.

Anyway, here’s a snip from the Wikipedia entry on Shakespeare’s birthplace:

Shakespeare’s Birthplace is a restored 16th-century half-timbered house situated in Henley Street, Stratford-upon-Avon, Warwickshire, England, where it is believed that William Shakespeare was born in 1564 and spent his childhood years. It is now a small museum open to the public and a popular visitor attraction, owned and managed by the Shakespeare Birthplace Trust. It has been referred to as “a Mecca for all lovers of literature”. [emphasis added] 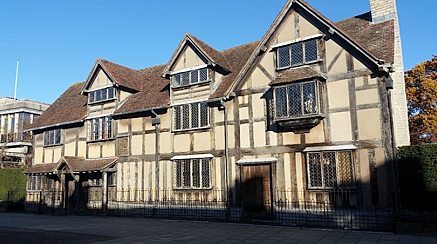 These photos were taken last Friday in the courtyard behind the Shakespeare museum (except for the one immediately above, which is from the front of the building). The faces of the women have been blurred to protect the person who took the photo as a protection against possible legal action.

As you can see, the last line in the excerpt from the wiki is eerily apropos.

Two groups who visited the museum sent us reports on their experiences. The first report:

Full ninja outfit, prayer mats, the whole caboodle. To do what they were doing in a place closely associated with one of the great pinnacles of civilisation is pure provocation — a great big two-fingered salute to all of us. You can be sure that they had no interest in Shakespeare or in the values which his art represents.

We drew the situation to the attention of the management, not that there was much they could do. To their credit they heard us out and were kind enough to refrain from having us arrested on the grounds of racism. But their response was the usual mealy-mouthed claptrap — ‘they have to pray at certain times each day’ and ‘we are a diverse country’.

Neither of these points holds water. It’s laid down in Islamic doctrine that when in non-Muslim countries you bide your time and fit in with the local conditions until you’re strong enough and numerous enough to assert yourselves. The fact that some are so emboldened as to feel able to mount such public displays gives a clue to the way things are going. And the diversity argument is a bad joke.

Once these people get their feet under the table we can all kiss goodbye to ‘diversity’. 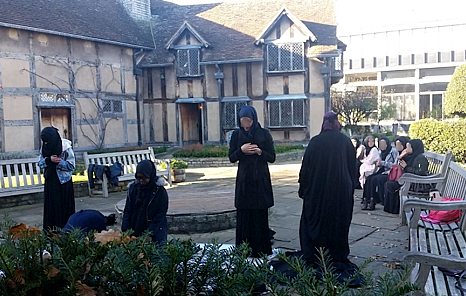 One feels disgust, but also pity for the girls who have been so brainwashed, not in some distant desert craphole, but in a country that once prided itself on its democracy and freedom. But most of all one feels ashamed that we have come down to this.

But let’s look on the bright side. I expect the Shakespeare heritage people will have learnt their lesson. Next time we visit Stratford they’ll have a fully equipped prayer room. 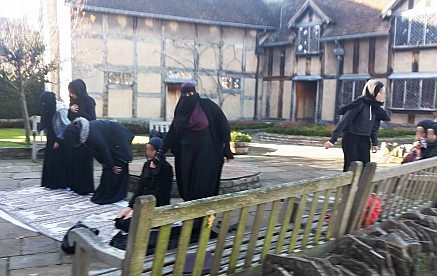 From the second group of visitors:

When we were in Stratford-upon-Avon we saw hardly any covered up heads — perhaps not even one… not even many pizza/chicken shops/kebab places… and then this! We were told they are a ‘diverse’ place and that they don’t have a prayer room.

Had to have mulled wine after that.

Surely there is a right place to pray and it should be a private matter. It should NOT be in the grounds of Shakespeare’s birthplace

Here’s another relevant quote from the Bard, this time from The Tempest:

O, wonder!
How many goodly creatures are there here!
How beauteous mankind is! O brave new world,
That has such people in’t!

29 thoughts on “Something Wicked This Way Comes”