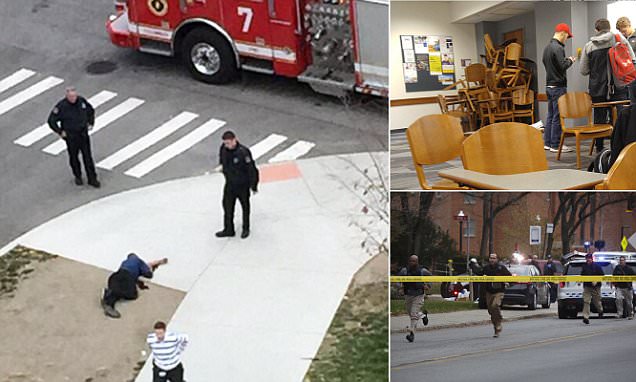 There was a car-and-machete jihad incident this morning at Ohio State University in Columbus. A young Somali-American ran his car into a crowd of students. He then jumped out, slashing at them with his knife or machete, before being shot dead by an alert police officer. Ten people were wounded (some versions say nine), but we can thank the Lord that only the perpetrator was killed.

The late culture-enricher has been identified as Abdul Razak Ali Artan, variously described as 18, 19, or 20 years old, depending on which article you read.

I’ve been following this story since the news first broke, but it kept morphing, so I hesitated to post on it. It seems to have settled down now, however. Here’s a representative sample from the latest information, as reported by the Associated Press:

COLUMBUS, Ohio (AP) — The Latest on an attack at the Ohio State University campus (all times local):

Authorities say the officer who killed an attacker at Ohio State University was a university police officer who’d been on the job for less than two years.

Department of Public Safety Director Monica Moll identified the officer as 28-year-old Alan Horujko. She says he started on the Ohio State police force in January 2015.

Ohio State Police Chief Craig Stone says it was fortunate there was a nearby gas leak that the officer had gone to investigate. Stone says it helped position Horujko to respond to the attack so quickly.

Authorities say they were able to get photos of the suspect’s vehicle driving onto campus and confirmed only one person was in the car.
___

A director of public safety says a man who drove a car into pedestrians and began stabbing people at Ohio State was a student at the school.

Authorities say Artan was shot to death by a police officer Monday morning shortly after he drove up onto a curb into pedestrians, got out of the car and began stabbing people with a butcher knife.

Nine people were injured, including one critically.
___

A U.S. official has identified the suspect in the Ohio State attack that injured nine people as a man of Somali descent.

The official identified Abdul Razak Ali Artan as the now-deceased suspect. He was born in Somalia and living in the United States as a legal permanent resident. It was unclear when Artan came to the U.S.

The official wasn’t authorized to publicly discuss details of the ongoing case and spoke to The Associated Press on condition of anonymity.

A second law enforcement official confirmed that authorities believe the suspect’s name is Abdul Artan. That official also wasn’t authorized to publicly discuss details of the ongoing case and spoke on condition of anonymity.

Authorities say the suspect was shot to death Monday by a police officer after driving up onto a curb and into pedestrians and attacking people with a knife.

There are several loose ends and strange unresolved details to the incident. The perp was initially identified as Ali Muhammad, based on the license plate on his car, as reported over a police scanner. An hour or so later the ID changed to Abdul Artan. Yet the car he was driving seems to have been registered to Ali Muhammad. Where is Mr. Muhammad now? And what was his relationship to the late suspect? I haven’t seen anything further on him.

Early reports said that there were “at least two people” in the vehicle that rammed the building. However, later accounts revised the story to say that Mr. Artan was the only one. As you saw in the AP story, there is allegedly (CCTV?) footage confirming that only one person was in the Honda that drove into the crowd.

Just for the record, the screen caps below show two stories, one from The Columbus Dispatch and the other from Fox News (the story at the link is different now), that included the eyewitness reports about there being two people in the car:

The early reports said the crowd of students had been in the courtyard because someone had activated an alarm indicating that there was a gas leak. This was walked back later in the morning, however — the alarm was said to have been a “drill”.

Yet Alan Horujko, the policeman who killed Abdul Artan, was only on the scene because he was responding to a reported gas leak.

So what’s the deal? Was there an alarm or not? If so, did Mr. Artan have an accomplice who pulled it?

Along those lines, there’s a final, tantalizing loose end: Two men were arrested in the parking garage after Mr. Artan was shot, as reported by The Daily Mail. The Mail story included these photos of the arrests: 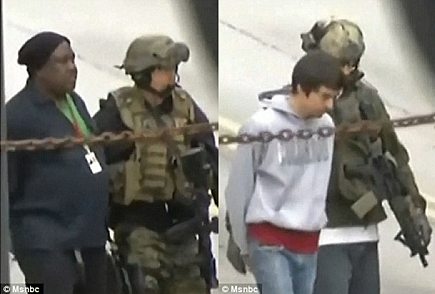 These guys may simply have had the misfortune to be carrying backpacks or briefcases in the vicinity of an “active shooter” event. If so, they were probably released not long afterwards without being charged.

In the “fog of war” during attacks like this one, there are often reports of multiple suspects. Later they turn out to have been mistaken, and the crowd is winnowed down to a single perp, who usually winds up dead. But this time there is actual footage of these guys being arrested. Who are they? What happened to them? I haven’t heard anything more.

There’s more coming up. As this post goes to press, there is a report about a Facebook post alleged to be by Mr. Artan. But I’ll cut the story off here; I’m sure this won’t be the last time I write about him.

Hat tips: For the AP article, Dean; for the videos, Vlad Tepes.