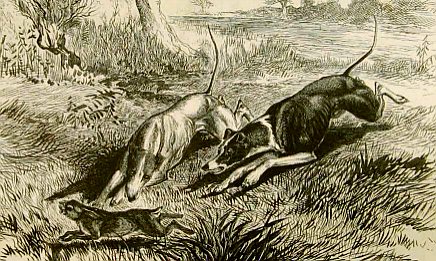 Today is Wednesday, and we’re moving into the third day of our quarterly fundraiser.

The theme of this week’s bleg is “Dog Days”. Here at Schloss Bodissey in the very wee hours of an August morning, the day’s dog is a wet one indeed. We had cold rain all spring, and then hot rain most of the time so far this summer. Damp, steamy, insufferable weather. Any dog having his day today would be a fragrant dog indeed.

The response to our first two days urging our readers to make the Tip Cup clink has been gratifying indeed. And the cross-traffic from Western Rifle Shooters Association has been especially noticeable. I can tell as soon as they’ve put up a link over there to our fundraiser, because donations suddenly appear from the reddest parts of the red states — Arizona, Oregon, Nevada, Texas, etc. Thanks, guys! It’s good to see you show up here with your open-carry long guns.

For those of you who think we are wussies for our reticence on certain topics, WRSA is the place to go. I’ve often said that it’s not necessarily a good idea to discuss publicly everything you know about that’s going on. Given the future that likely awaits us after the excrement impacts the circulation device, I don’t want to needlessly add myself or anyone else to the list of people to be rounded up when the Loretta Lynch mob launches its crackdown. WRSA, however, has a mission that requires a more open discussion of the specifics of contingency planning for such eventualities. If you’re interested in those matters, and haven’t already been there, a visit is recommended.

When I was thinking about these Wet Smelly Dog Days yesterday afternoon, a phrase popped into my head: “Running with the hare and hunting with the hounds”. I believe it’s a British expression, and it refers to someone who wants two opposite things at the same time. An American equivalent is probably “To have your cake and eat it too.”

It came to mind again when I was moderating comments on the post with two videos about three leftist women in Germany who had been raped and/or groped by “refugees”. These women are devotees of the “Welcome Refugees” movement, and loathe “right-wing extremists” who want to curtail immigration. Yet they are feminists, too, and dedicated Social Justice Warriors against Germany’s “rape culture.” The two different zealotries clash when their adherents experience the seamier side of cultural enrichment, driving them into a state of cognitive dissonance.

The left-wing mindset focuses on championing the victim. Among European leftists, migrants are the victims, and the hateful racist right-wing xenophobes are the persecutors.

But women are victims, too, especially when actual sexual violence is attempted upon them. Heck, even an admiring male glance at the appurtenances of an attractive woman is considered a “microaggression”. What about groping, molestation, and rape? But egad! The perp is a poor unfortunate migrant! (Or more realistically, a gang of seven or eight of them.) What are all these wymyn to do?

They want to have it both ways, and they can’t. They want to run with the hare while they abhor the hounds, but suddenly the hares have morphed into hounds. Something has to give, but which will it be?

The answer is a no-brainer, really. After more than ten years of studying the Left and Multiculturalism, I have come to the conclusion that immigration — specifically Islamic immigration — trumps everything else.

Women’s rights, gay rights, sexual license, gender-this or gender-that — all of it gives way before Islam. That’s why prominent feminists are uniformly silent in the face of Islamic misogyny. That’s why gays take to the streets in solidarity with Muslims against Islamophobia.

It’s a special kind of madness, this Multicultural madness. Absolutely suicidal, but all indications are that its adherents will cling to it until the bitter end. Death is preferable to losing the pristine purity of one’s doctrinal delusions.

They want to run with the hare and hunt with the hounds, but the hounds are hot on their heels now. They really can’t have it both ways.

Other examples of Progressive doublethink abound. What they all have in common is the desire to run with the hare — that is, to be in solidarity with the victim, whoever happens to be the designated victim at any given moment.

The current uproar over police shootings of blacks is a case in point. The black men killed by police are the obvious victims, and the media thus lavish uncritical coverage on the hare — Black Lives Matter — while putting the police hound in as bad a light as possible.

But then came the murder of police in Baton Rouge. The killer was obviously in tune with and inspired by BLM, but that doesn’t matter — the dead policemen become the victims. Joe Biden can attend the funeral and shed a solemn tear without any hint of cognitive dissonance. Yesterday the hound, today the hare.

And imagine the anti-police activist who’s just been raped or mugged. Who does she call? Black Lives Matter? Nope, the police. And she probably castigates them for not arriving soon enough to shoot her attacker dead.

Sometimes you really need that hound.

There must also be instances of symmetrical hounds-and-hare positions taken by conservatives. One example might be the way some conservatives push to enforce behavior they approve of though subsidies and tax breaks administered by huge centralized bureaucracies. Way to go, guys!

We have a few Progressives among our readers — I’m sure they can think of other examples.

But by and large, leftists are more prone to the having-it-both-ways syndrome than are right-wingers. A more common conservative vice is hypocrisy — call it the Jimmy Swaggart syndrome. Preaching one sort of virtuous behavior while you habitually engage in its opposite. And when you get caught, you lie and obfuscate for as long as possible.

Since liberals are generally supportive of most types of vice, hypocrisy is not so much of an issue for them. What could they be caught doing that might embarrass them? Attending church three times a week, maybe? Opening a door for a woman carrying packages? Reading Kipling?

No, they aim to run with the hare and hunt with the hounds. Such is the nature of the beast.

A lot of people turned up yesterday to make that Tip Cup ring like the Liberty Bell. They came from:

Thank you all so much for your habitual generosity. I think we might just make it through another quarter!

4 thoughts on “Running With the Hare”