Paul Weston has a few words to say about his fellow PEGIDA UK leader, Tommy Robinson, who walked free from Peterborough Magistrates’ Court yesterday after the case against him was dismissed. 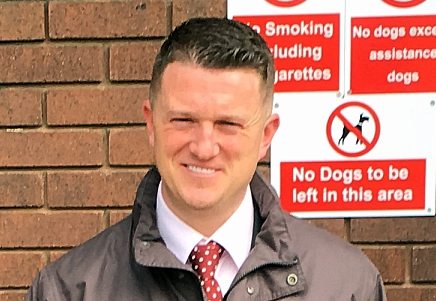 Tommy Robinson Lives to Fight Another Day
by Paul Weston

Tommy Robinson is a free man today, as opposed to sweating it out at her Majesty’s pleasure surrounded by dangerously violent men long of beard but short of human decency.

Tommy maintains the real reason the British state wants him banged up is not to “rehabilitate” him via left/liberal bleeding-heart probation officers, but rather to kill him, thereby removing a perennial thorn in the side of the establishment. As Mark Steyn says: “I’ve looked fairly closely at the British state’s curious obsession with Mr Robinson, and his conclusion seems to me entirely reasonable.”

I would agree with Mr Steyn here. A prison governor who places a man “guilty” of a white-collar crime (mortgage irregularity à la Peter Mandelson and many other British politicians) alongside Muslim murderers in a high security jail, is a governor operating under strict instruction from above, one can only surmise.

Had Tommy been murdered during his previous incarcerations, the prison governors would have been hauled over the coals via a public enquiry — not something in their best interests and not something they would willingly bring upon themselves. No doubt their excuses would have been “I was only following orders,” but who gave those orders? The awfully nice Mr Cameron? The fragrant Theresa May or the apparently benign Justice Minister Michael Gove?

Fortunately for Tommy, the musings above are pure conjecture, but I imagine the orders came from the very top, which does not bode well for a liberal and democratic Britain. Our politicians and police seem to have appraised the situation which consists of ever-growing Islamic demographics coupled with ever-growing Islamic fundamentalism, and made a conscious decision to appease the Muslim community whilst persecuting any native who publicly draws attention to the illiberal requirements institutionally inherent in Islamic doctrine.

As the years progress we will see more and more appeasement of Muslims from our traitor class in the political and media world, and more and more repression aimed at those who notice Islam seems not to be a religion of peace, but is instead a political ideology of blood, war, supremacism, misogyny, intolerance, imperialism, fanaticism, Jew-hatred, kuffar-hatred, homosexual-hatred, you-name-it-hatred and other such assorted wonders of 7th-century barbarianism so foolishly imported wholesale into 21st century liberal democracies. 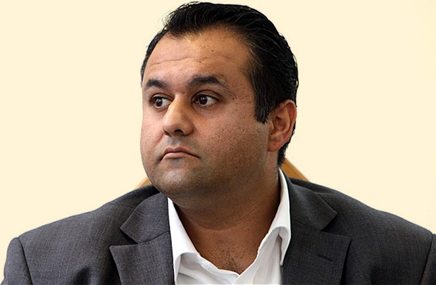 Oh, dear! Call Inner Party member O’Brien’s Thought Police! There I go again, writing Hate Facts in the public sphere, contrary to the wishes of our political masters — and of course the charmless chubster Fiyaz Mughal of the corrupt and English/Christian hating organisation TellMama. I mention Mr Mughal, the well-known mendacious, grievance-mongering, tubby taqiyya artist only because I know he monitors these articles for any sign of “Islamophobia”, after which he can then scuttle off to the British government and press them to break out the rubber truncheons in order to deal with the intolerant. All in the name of tolerance, of course…

And this is not entirely in jest — apart from mocking the positively Falstaffian Fiyaz that is — because the British government is already formulating the ways and means of eliminating all incorrect thought amongst the stubbornly PC resistant dissident patriots, courtesy of Home Secretary Theresa May’s Counter Extremism Strategy.

In her blurb at the beginning of this Orwellian document, Ms May expounds thus: “But the threat posed by extremists is not limited to violence, nor to Islamist extremism. The rise of neo-Nazi groups, and the increase in antisemitic (sic) and anti-Muslim hatred is deeply concerning… This strategy therefore addresses the full spectrum of extremism: violent and non-violent, Islamist and neo-Nazi hate and fear in all their forms.”

Good old David (call me Dave) Cameron also weighs in with some typically asinine, witless and contradictory remarks: “Over generations, we in Britain have built something extraordinary: a successful multi-racial, multi-faith democracy. Our country today is more vibrant, buoyant and diverse than ever before in our history…one of the greatest threats we face is the scourge of extremism from those who want to divide us. We see it in sickening displays of neo-Nazism, Islamophobia, antisemitism and, of course, Islamist extremism.”

I think we can all see where they are going with this. “Neo-Nazis” and “Islamophobes” must watch their backs, in other words. We had all better stop goose-stepping around in Storm Trooper uniforms blowing up mosques and raping young, vulnerable Muslim girls whilst proclaiming our Aryan superiority over the Untermenschen Muslims. Dave and Theresa might have a point if this were actually happening, if it were actually true, but Dave and Theresa are spouting what can only be realistically described as a load of absolute bollocks in terms of reality, facts and honesty. Seriously, this is the stuff of madness.

On page fourteen of their counter-extremism bill they quote some examples of what they presumably think is Neo-Nazism in action: “Videos by one extreme right group, viewed more than 59,000 times, argues that the only viable option on the table is to remove Islam from Britain.” Followed by: “Another video, viewed more than 9,000 times, shows a speaker at an anti-Muslim rally in Newcastle describing Islam as a disgusting, backward, savage, barbarian, supremacist ideology masquerading as a religion.”

“Well, blow me down with a feather!” I thought when I read those quotes. They rang a bell with me, as well they should, considering they were taken from two speeches I made a couple of years ago. I suppose I now await the Quasi-Stasi banging on my front door at some ungodly hour in the near future. I briefly wondered who drew the British government’s attention to these examples of appalling Islamophobia, and yet another bell immediately chimed. It can only have been the mendacious Mughal of TellMama infamy. The fraudulent Fiyaz! The portly propagandist himself! As it duly turned out to be.

Which is rather odd. Disturbingly odd, in fact. Mr Mughal’s “evidence” in this 2015 government document is used as an apparently reliable source of information (footnote, page thirteen) despite his funding being withdrawn in 2013 for making up figures pertaining to imaginary or grossly exaggerated attacks on Muslims by nasty horrible white people. It would seem the British government is so desperate to find examples — real or otherwise — of Neo-Naziesque Islamophobia, they will even take the word of discredited fraudsters such as Mr Mughal which they then utilise in official documents.

And they are doing this only to crack down on the native English, the Tommy Robinsons who speak out. We are deemed “extremists” because of our words whereas Muslims are (usually) only deemed extremist because of their violent actions. Having said that, there is actually one example of Islamic extremist speech in the document on page twelve: “Videos by one Islamist extremist have been viewed more than 5,000 times on YouTube, including his claim that unbelievers (or ‘Kufaar’) are not worth anything, less than an ant, less than an insect, less than a dog. A dog has more honour than a Kafir and at least the dog he’s loyal to you.”

Her Majesty’s government displays a profound ignorance of the Koran here. Does not verse 8:55 explicitly state much the same viewpoint? “The worst of beasts in Allah’s sight are the ungrateful who will not believe.” If the government views a statement similar to this as an example of just the sort of extremism they are trying to stamp out, should they not simply ban the Koran and have done with it? Silly question, I know…

No, the British establishment, as Tommy Robinson is only too aware, will crack down on those designated by establishment decree as Islamophobic racists. They will crack down on genuine Muslim terrorists as well, but they will pretty much ignore the non-violent actions of those who share the same vision of a global caliphate but who utilise peaceful(ish) means in order to bring it about.

I have no doubt the state sanctioned persecution of Tommy was partly carried out purely to appease vocal British Muslims (such as the erstwhile epicurean Fiyaz Mughal) who don’t want the stark and unpalatable truth about Islam drawn to the general public’s attention. Which is of course a direct form of submission to Islam by Dave and Theresa — not that they’re bright enough to even realise it.

Tommy Robinson has had to endure both the unimaginable horror of Muslims who made his life and his family’s life a living hell with death and rape threats AND he has had to endure the disgusting and quite possibly illegal persecution carried out by his own people, the British establishment itself, which I truly believe wants him dead.

It is a shame human rights groups such as Shami Chakrabarti’s Liberty made no attempt to help him, despite clear contraventions of his human rights, but I suppose Tommy is the wrong race, wrong colour and wrong religion. Shami’s Liberty is nothing more than a sham in actual fact. A human rights sham. This is their motto: “To protect civil liberties and promote human rights for everyone.” Sounds lovely, Shami darling, but it’s just not quite true, is it?

No doubt Ms Chakrabarti considers Tommy’s persecution as perfectly valid simply because he cleaves to a different political outlook than her own. But here’s the thing, Shami: politics shouldn’t come into the equation at all. Human rights are human rights, period. Or at least they used to be before the race and religion hucksters of the liberal/left politicised an industry that should be oblivious to politics if it is to remain worthy of its name. So congratulations, Ms Chakrabarti: you have destroyed something invaluable in terms of human decency. You have no respect for genuine human rights, just you own political agenda. You are a charlatan and a disgrace to your supposed profession.

But ending on a positive note: the generous contributions toward Tommy’s defence fund gained him a professional legal defence for the first time and quite possibly saved his life. So kudos to all of you who contributed. Tommy lives to fight another day, and I’m sure would like to see as many of you as possible when Pegida UK holds its next rally in Rotherham on the 28th May. It should be a great day out, and could even draw the likes of Fiyaz Mughal there as well, if only to spy upon us. We were thinking of having a hog roast, which is both delicious and a form of inter-faith cultural and community engagement to be celebrated by all, even if it might cause something of a gastronomic/moral quandary for the fat fraudster Mr Fiyaz Mughal.

22 thoughts on “Tommy Robinson Lives to Fight Another Day”