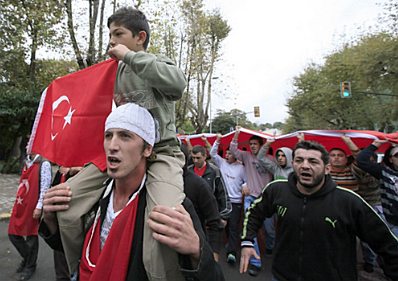 We posted last Saturday about the editor of an Austrian daily paper who caused a ruckus by saying that it must be possible to discuss the banning of Islam from Europe. Below are two more articles on the topic, both translated by JLH.

Wolfgang Fellner, the Viennese editor of the daily paper Österreich (Austria), has penned a very readable commentary on the terrorism in Brussels. He suggests taking three lessons from the “Super-GAU for our security”. Fellner: …The third point in the battle against terrorism is the most problematic: The discussion must be allowed of whether Islam per se should be banned in Europe. With all due respect for the freedom of religion and the many peaceful, sympathetic adherents of Islam here in Austria. The lines between peaceful Islam and terrorism in the name of Islam are becoming increasingly more blurred. In our municipal kindergartens. In many mosques. Terror is encouraged, preached and prepared there. This cannot go on.

And a longer article from Die Presse:

Brussels Terrorism: Uproar Over the Österreich Commentary on the Banning of Islam

Editor Wolfgang Fellner calls for allowing discussion of a ban on the practice of Islam in Europe. Religious community criticizes Fellner.

An editorial in the daily Österreich by Wolfgang Fellner has caused outrage among Austrian Muslims. In the Wednesday edition. he opined : “The discussion must be allowed of whether Islam per se should be banned in Europe.” The opinion of the Islamic community is that Fellner is openly “attacking the central human right of religious freedom.”

The spokeswoman for the Islamic Faith Community in Austria (IGGiÖ), Carla Amina Baghajati, stated in a broadcast that Fellner’s statement represented “an atrocity and must not be passed over in silence.” She says that Islam is a state-recognized religion in Austria. When Fellner writes that the lines between peaceful Islam and terrorism in the name of Islam are becoming increasingly more blurred, she says, Muslims are being pushed into the “spiritual vicinity of the terrorists.”

Terrorists would be happy about Fellner’s comment, Baghajati believes, for “Islamophobia is grist for the mill of their perfidious recruiting propaganda which above all emphasizes the experience of exclusion.” The editor of Österreich is doing them a favor “by going beyond the general suspicion already painfully perceptible to Muslims.” By openly discussing the demand for a ban, he is only confirming the distorted view offered by the terrorists.

Fellner refined his view. It a not about a ban on a religion per se, but a possible ban on its practice. As in the study on kindergartens commissioned by the Minister of Integration, Sebastian Kurz (ÖVP — Austrian People’s Party), there must be an examination of the institutions of the religious community. in order to draw appropriate conclusions. “For me, it is also that the ideology of terrorism must be stopped,” Fellner expanded. Therefore, it would be necessary to investigate to what extent this is an ideology of Islam itself.

Unprecedented agreement for an editorial

Fellner sees no call in his article for a ban, but simply an invitation to thought: “Ultimately. the discussion will have to be allowed.” He had never before experienced so much agreement with an editorial, he reported, and explained that he himself is an open and liberal person. At any rate , there are limits. “We cannot expose ourselves to the dictates of a religious community which has, crusader-like, declared war on the West.”

Religious freedom in Austria is based primarily on the patent of tolerance issued in 1781 by Emperor Joseph II. The acknowledgment act for religious communities has been in effect since 1874. Beyond that, the Islam Act has applied in Austria since 1912, securing rights for Muslims. This was reformed last year for the first time.