The following essay by JLH was originally written in German for Politically Incorrect. It has been translated by the author for Gates of Vienna.

For years, I taught German — the language, the literature, the culture. Now and then I spent time in Germany, Austria and Switzerland. And as I read and wrote and stood before my classes, it dawned on me gradually that I was only one of a great many who were nurturing and passing on a deep, rich tradition of literature, art, philosophy, music, science, trade and industry. I believed that I had not only found a noble profession, but was also sharing in an important destiny. I was illuminating for younger generations an indispensable component of the past, the present and, above all, the future of the Western world. I thought I could visualize a future in which Beethoven, Kant, Goethe, Dürer and Röntgen would still shine as the guiding stars of a flourishing culture.

During my time in teaching, a professor of the Classical languages and literatures was in the office next to mine. He was as enthusiastic about his calling as I was about mine. Every day in his classes, he breathed life into the philosophies, myths, poetry, speeches, epics, satires, dramas and comedies of these “dead” civilizations. He had access to almost unfathomable riches, which dared not be lost. Ultimately — with the Judaeo-Christian tradition and its Enlightenment — these remnants of classical antiquity comprise the foundation on which our Western civilization rests.

My colleague had a certain advantage over the rest of us language teachers. Even in his elementary courses, where Latin or Ancient Greek were read, they spoke in English, and therefore fluently and at a much higher level of understanding. The downside was that he could not travel to Rome or Athens or Corinth and chat there with the natives in Latin or Ancient Greek, because — outside of books or the Church — these languages no longer exist. And that, as Bertolt Brecht might well have said, has to do with the rise and fall of the ancient world.[2] 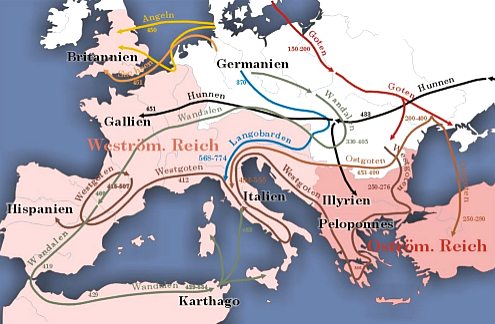 Die Völkerwanderung — The Germanic migrations of the First Millennium A.D.

My colleague had a map of the so-called Barbarian Invasions, which — interestingly enough — I was able to use in my myth course to illustrate the mass migrations of the Germanic tribes. Invasion/mass/migration. It depends on how you look at it. How does one distinguish between mass movements?

Well, the “best” of the ancient intruders liked a great deal about Rome. At least the luxury and power, but also other aspects of a literate society. Some of them became emperors and tried to hold the empire together. Theodoric ruled as king in Italy. Still, the glory and the grandeur faded, not immediately, but inexorably. And now we think of all that, and we honor and study the enormous accomplishment of a past civilization. Once upon a time…

But what is happening here and now is not the incursion of powerful tribes who are bringing their own useful skills. It is not leaders who are seeking a new home for their people. Germany is being hijacked. By an as-good-as-unrestricted swarm of raging, alien creatures who can more swiftly and completely flood and extinguish a culture than any ancient barbarians. And soon those of us outside may also have to say: Once upon a time…

I cannot, do not want to, believe that one day someone will pull something by Gryphius or Grimmelshausen, Droste or Dürrenmatt, Schiller or Schopenhauer, Brahms or Bach out of a forgotten drawer only to — secretly and fleetingly — blow life into the moribund coals of a dead civilization. And to what purpose is all that happening? To accommodate the folly of delusional, self-appointed elites! After they have extinguished pride in one’s people, nation and tradition, and traded away human dignity for prestige and wealth, what is left?

As a friend did recently, I quote the words of Heinrich Heine:

When I think of Germany at night,
My ability to sleep takes flight.[3]

Will there still be libraries, churches and synagogues, opera houses, museums, or only smoking ruins? Will there still be women, or just black-robed ghosts with shopping bags? Will there still be men — perhaps on the way to work — or only bearded gang-rapers, hanging around and snarling? Will there still be children or just today’s sexual victims and tomorrow’s brain-washed suicide bombers? Will it be permissible to speak German without paying a special tax? Will any memory of how it used to be still exist anywhere? Ask the Christian, Jewish, Yazidi and other Dhimmis who “live” in Islamic countries.

And so, Dear Germany, with the profoundest regret: Hail and Farewell!