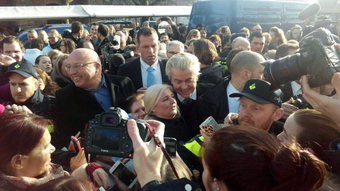 As promised, today Geert Wilders paid a visit to the southern Dutch town of Spijkenisse to highlight the danger posed to Dutch women by the ongoing “refugee” crisis, which has seen thousands of additional young male third-worlders enter the Netherlands. Cologne and dozens of other European cities have recently experienced a Groping Jihad waged by migrants against native women, and the Netherlands is not likely to be exempted from its ravages.

Mr. Wilders and other leaders of the PVV handed out “resistance spray” to women in the Markt at Spijkenisse. Almost all means of self-defense, including pepper spray, are forbidden by law to women (and men) in the Netherlands. The new defensive spray distributed by the PVV contains red paint. If that fails to stop a would-be assailant, it will certainly make him conspicuous for a while after his assault.

And if the resistance spray turns out to be effective, it will no doubt be outlawed soon afterwards by the government.

Mr. Wilders tweeted that an enthusiastic crowd turned out to resist the Islamic invasion and the “testosterone bombs”, as he calls the young culture-enrichers who grope and molest women in public spaces all over Europe. 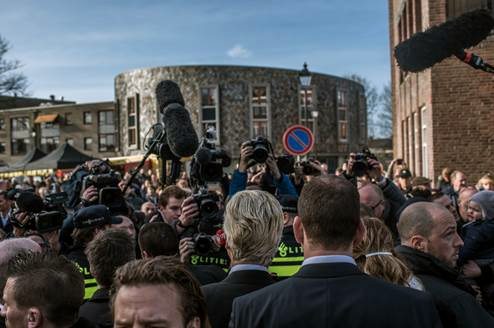 In the photo above, notice all those alert men encircling Geert Wilders with their backs to him. Those are his bodyguards. They are with him everywhere he goes, even in the friendliest of venues.

Below are excerpts from a report from The New York Times on Mr. Wilders’ visit to Spijkenisse:

SPIJKENISSE, Netherlands (AP) — The Dutch debate on asylum-seekers has come to this: Firebrand lawmaker Geert Wilders handing out self-defense sprays to women fearful of what he describes as “Islamic testosterone bombs” in the wake of the New Year’s Eve sexual assaults in Cologne.

Wilders, surrounded by bodyguards and police, visited a market Saturday in the largely blue-collar town of Spijkenisse to hand out the sprays, which contained red paint. Amid stalls selling vegetables, fish, flowers and bicycle parts, Wilders got a rock-star welcome from dozens of supporters, while others protested his visit, waving placards including one that read, “Refugees are welcome, racism is not.”

The publicity stunt fits into Wilders’ uncompromising anti-immigrant, anti-Islam rhetoric that has propelled him to the top of Dutch opinion polls, just over a year away from the parliamentary election.

In between shaking hands and posing for selfies with supporters, the Freedom Party leader said that, if elected, he would, “close the borders immediately and have no more asylum-seekers. We just cannot afford to have more. The Dutch people in a big majority don’t want it and we cannot afford it and it makes our people and women only more unsafe.”

His message is gaining traction here amid a surge of refugees to Europe and following deadly attacks by Islamic extremists in Paris last year. It echoes Republican front-runner Donald Trump’s call for a temporary ban on Muslims entering the United States and is similar to other populist, nationalist groups in Europe like Marine Le Pen’s National Front in France.

“The tendencies across Europe are very similar,” said University of Amsterdam political science professor Wouter van der Brug. “Across Europe, right-wing populist parties are picking up support as a result of the asylum crisis that we’re facing now, and also as a result of terrorist attacks.”

Leontine Maris was one of the first women to get a spray from Wilders. The 53-year-old said she votes for him though she disagrees with some of his more extreme comments. She said she was afraid not just of migrants, but also Dutch men.

“The whole society is going down the drain,” she said.

As Wilders’ popularity soars on the back of such disenchantment, Prime Minister Mark Rutte’s two-party coalition is in a slump, losing ground mainly to Wilders.

“Wilders is getting support across different layers of society,” Van der Brug said.

Rutte has ruled out cooperating with Wilders unless the Freedom Party leader takes back comments made in 2014 that he would see to it that there were fewer Moroccans in the Netherlands. Those same comments also landed Wilders in trouble with Dutch prosecutors, who plan to put him on trial on charges of discrimination.

That kind of criticism is not new to Wilders, who has made his name with inflammatory anti-Islam rhetoric. He was acquitted in 2011 on hate speech charges for comments including likening Islam to fascism and calling for a ban on the Quran.

Wilders’ party currently holds 12 seats in the 150-member lower house, but a poll by Ipsos on Thursday suggested the Freedom Party would win 32 seats now. Rutte’s Liberals were second with 26 seats, down from its current tally of 40. The online survey of 1,061 voters had a margin of error of plus or minus 2.5 percent. Other polls have Wilders even further ahead.

Another version of this article was published by The Seattle Times.

24 thoughts on “Geert Wilders in Spijkenisse: “Close the Borders Immediately””