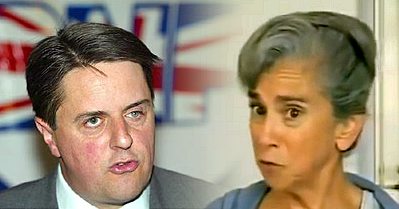 Last night’s post “The Final Solution to the European Problem” featured a video compilation of various clips about the mass importation of immigrants into Europe, and the coming demographic destruction of native Europeans by the far more fecund Muslim hordes they have invited into their midst. The compilation included footage from CBN reports, various German and French news items, the BNP, a Swedish documentary, and any number of YouTube clips from unknown sources. As I mentioned in my introduction, I recognized many of those source clips, and recalled that Vlad and I had done our own subtitled versions of some of them.

I knew there would be trouble when I posted that video, since it contains clips of Nick Griffin and Barbara Lerner Spectre. Sure enough, both of them came up in the comments, and also in various emails sent to me this morning.

Let’s tackle Mr. Griffin first. Yes, it’s true that he broke the Rotherham “grooming” story years before the EDL took it up. But there is more in the former BNP leader’s history than that. He is a pragmatic fellow who is willing to modify his positions drastically when there is advantage to be gained from it.

Twenty-five years ago Nick Griffin was singing a different tune. At one point he favored an alliance with Muslims. Since then the political winds have shifted, and Mr. Griffin’s ideological banner has obviously shifted with them.

Check out this video that Vlad compiled several years ago:

Yes, that’s right: Nick Griffin made common cause with Qaddafi and Iran, and said he would work with the Muslims.

But that was then, and this is now. My, how times have changed.

The one constant in Nick Griffin’s shifting opinions is his Jew-hatred. Or, too be fair to him, his hatred of “Zionists and bankers”. And Barbara Lerner Spectre provides the perfect target for him and others who share his sentiments. She is neither a banker nor, presumably, a Zionist, given her advocacy of a borderless multiculture. But she’s Jewish, and engages in strident advocacy as a Jew, which makes her an obvious target.

Several people have told me that they think it would have been better to have left out Ms. Spectre, so as not to give her prominence and thus provide further fuel for anti-Semites. The problem with such suggestions is that we would have to decide to overlook her stated intentions as a self-identified Jew who advocates the mongrelization of Europe. She proposes essentially the same thing as Nicolas Sarkozy and other Gentile luminaries, but with a specific declaration that Jews, as Jews, must be in the vanguard.

We can’t escape this problem. It’s a fact; she said it. Consciously, knowingly, and intentionally for public consumption to an interviewer making a Swedish documentary, she happily proclaimed her intentions. Gates of Vienna featured that clip when it first came out, and I discussed it at length back then.

When I first saw it, I thought to myself, “Oh, no! This woman is God’s gift to David Duke!” And indeed that was how it turned out — within a few weeks the clip was circulated by David Duke, and spread rapidly among neo-Nazis and other groups preoccupied with Jewish conspiracies. Do an Internet search on her name, and you’ll see where it overwhelmingly pops up. It’s not possible to bring that clip to the attention of anti-Semites: all of them are already gleefully aware of it.

The big question remains: Is Barbara Lerner Spectre representative of a larger, self-consciously Jewish movement in Europe and beyond? Or is she an army of one?

I don’t know the answer to that question. But we do ourselves and our movement a disservice if we cover it up and pretend it doesn’t exist. Because I guarantee you that David Duke and his ilk won’t.

We won’t win this information war by attempting to conceal uncomfortable truths. They remain truths, despite our efforts to ignore them and pretend they don’t exist. And the truth will out.

Jews who think the way she does are unwittingly hastening their own destruction, as Jews, by pushing for the Islamization of Europe. When Muslims gain full control — or even before that, when they can act with sufficient impunity — Jews will be the first group they massacre, followed closely by Christians, Hindus, Sikhs, and atheists.

Eventually it will be the turn of the Ismailis, and the Ahmadis, and the Baha’i, and all the other splinter sects of Islam to be slaughtered en masse.

And the final purge will involve Sunni vs. Shi’ite, the Gog and Magog of Islam. Or Yajuj and Majuj, as the Koran calls them.

Then Europe will finally be purified for the sake of Allah.

Note: The title of this post is mostly a reference to the ancient giants of British folklore (a.k.a. Gogmagog and Corineus). Their names are only tangentially related to the people/nations with the same names as described in Jewish and Christian eschatology.