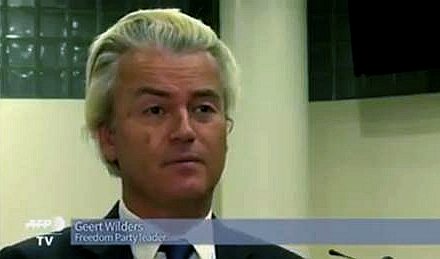 Geert Wilders, the leader of the Party for Freedom (Partij voor de Vrijheid, PVV) in the Netherlands, was interviewed today by Agence France-Presse. Mr. Wilders emphatically affirmed his desire that his country leave the European Union, so that it will no longer have to pay for the catastrophic policy decisions made by Germany and other xenophilic European countries:

Below are excerpts from the accompanying AFP article:

As the popularity of his far-right Freedom Party (PVV) skyrockets amid Europe’s largest movement of migrants since World War II, Wilders has his sights set on becoming the next prime minister of the Netherlands in elections due in 2017.

“The only way to deal with it (the refugee crisis) is to regain our national sovereignty and close our national borders,” Wilders told AFP in an exclusive interview in the Dutch parliament.

“I’m not asking for anything strange, I am asking that our government close its doors as Hungary did …that we close our borders to those we consider to be migrants, not refugees,” he said.

Reviled and supported in equal measure, Wilders’ fiery rhetoric is finding fertile ground among working and middle-class Dutch, who fear social upheaval as thousands of asylum seekers from Syria, Afghanistan and other conflict areas reach the Netherlands.
Polls showed Sunday his PVV would win 38 seats in the 150-seat Lower House should elections be held today — its largest-ever showing in a predictive survey.

The lowlands country of 17 million citizens is bracing to take in about 60,000 asylum seekers by the end of the year with numbers climbing weekly to reach some 1,800 alone in the first week of November, according to the latest government statistics.

The issue has polarised the Netherlands, which prides itself on its long, but fading tradition of consensus politics and multi-cultural tolerance.

In recent days both Dutch King Willem-Alexander and lawmakers have called for calm after rowdy gatherings about housing refugees.

“People are angry, they are afraid, they want a different policy and the political elite is not listening to them,” said Wilders, 52, sporting his trademark platinum-blonde hairdo.

“That’s why parties like mine all over Europe are getting very strong.”

He argues the refugees would be better provided for if they stayed in countries closer to home, with a similar culture and religion — and that many of the arrivals are economic migrants not true refugees.

His message may be gaining some traction, but Wilders remains wary of poll figures. The PVV currently has only 12 seats, down from 15 after a disappointing result in 2012 elections. In the previous polls in 2010, the PVV had grabbed 24 seats.

“The larger we become, the more difficult it will be to ignore us and I’m sure we have a chance to govern,” Wilders insisted.

He also put the European Union on notice that he would move to pull the Netherlands out of the 28-nation body, arguing countries are stronger outside of the organisation.

“At a supernational level in Brussels, we never had a democracy. The European Commission, nobody elected them,” he said, urging Britons to vote for a “Brexit” in next year’s referendum.

Wilders chided leaders such as German Chancellor Angela Merkel for her open-door policy towards refugees.

“I think it was very unprofessional and even irresponsible,” he said, adding: “We should not have to pay for the stupidity of Angela Merkel.”

Wilders said he was opposed to any violence including against Muslims — although his comments on the Koran and Islam are seen by many moderate Muslims as highly disrespectful.

“If people threaten to use violence against anybody, any person and any institution, they should be taken to court and jailed for a long time,” said Wilders.

“Nobody in this parliament and maybe in this country knows better than I do what it’s like to be threatened with violence.”