Recent events in Germany have propelled a number of new politically incorrect figures into the public spotlight. The PEGIDA movement has given us, for example, Lutz Bachmann, Tatjana Festerling, and Götz Kubitschek. The first two of these are from the former DDR, whose inhabitants have managed to resist and throw off the blatant lies they were subjected to under Communism. The propaganda in the West has been more subtle and therefore more effective, so that resistance to the multicult among Wessis is not as strong.

Alternative für Deutschland (Alternative for Germany, AfD) has also brought new personalities to the forefront. Björn Höcke, another Ossi and an AfD leader, is featured in the article and video below. Many thanks to Rembrandt Clancy for the translation and introduction.

But perhaps it is coming to pass, that this drastic remedy is once again stirring Germans into wakefulness. Perhaps it is the last chance for our people to once again awaken.

The 14-minute video which follows introduces a new personality surfacing in the central resistance to what Thilo Sarrazin called the abolition of Germany. He is Björn Höcke, married with four children, and Thuringia’s state chairman for the Alternative für Deutschland (AfD), which in 2014 entered the Landtag for the very first time with eight seats and 10.6 % of the votes.

The video consists of highlights of Mr. Höcke’s speech on 22 October before the AfD district association in Pasing, a Municipality in Munich.

Mr. Höcke’s recent high profile among opponents of the abuse of asylum in Germany coincides with Frauke Petry’s replacement of Brend Lucke as the national AfD party leader in July of 2015. This prominence is all the more remarkable as the “AfD is still a tiny splinter, and relatively timid at that” (Baron Bodissey).

According to estimates by Politically Incorrect, the Erfurt demonstration the day prior to Mr. Höcke’s Munich speech attracted as many as 10,000 participants in a city of just over 200,000 inhabitants. They take place in Cathedral Square (Domplatz) in the shadow of the splendid Erfurt Cathedral (St. Mary’s Cathedral). The neo-Catholic bishop, Dr. Ulrich Neymeyer, arranges for the Cathedral lights to be extinguished on these occasions. 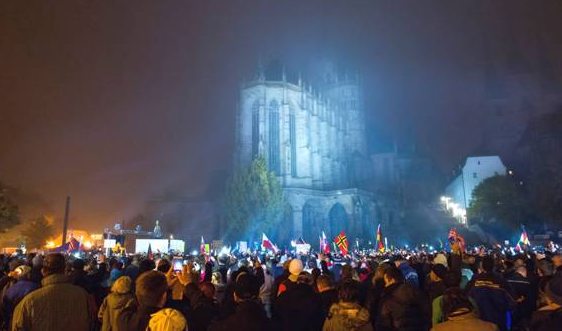 The Thuringian AfD state chairman, Björn Höcke, who for weeks has been illuminating the streets with blazing speeches and who has a strong presence in the media, held there [in Nuremberg] a much-celebrated speech. Not least, his noteworthy appearance on Günther Jauch’s ARD prattle-circle demonstrated his possession of staying power; he did not allow himself to be forced off of his consistent line of thinking by four perpetually outraged opponents including the partisan moderator. The era of the timidly submissive appeaser who keeps his distance, [Brend] Lucke, is for the AfD, thank God, a thing of the past. [Politically Incorrect, 26 October 2015]

“Günther Jauch’s ARD prattle-circle” is a nationwide talk show provided by one of Germany’s national television networks. Our video includes a scene from one of these shows in which Mr. Höcke set off a media storm of vituperation, invective and personal attacks against him after he “provocatively” displayed the German flag before the running camera (MDR Thüringen).

It is not possible to include all the important aspects of Mr. Höcke’s speech in 14 minutes, such as, for example, its main political objective:

And when I speak at the Erfurt demonstrations, and I sense the will of the people, I also sense the fury of people; for I know, if we have the will, and if we articulate this will and carry it onto the streets, also in West Germany, then we will force new elections in 2016, dear friends.

Our video highlights the following of Björn Höcke’s most prominent themes:

It belongs to the art of politics to also choose the right symbol in the right place and at the right time. As you know, we have a symbol of state that is absolutely central, and that is our state flag. And this flag is associated with a wonderful liberally democratic past of the German people.

Black, red and gold: those were the colours of the Lützower Jäger, who battled their way through the Wars of Liberation as the only unit to wear those colours.

And for that reason…

[The German flag is carried onto the rostrum.]

Ah! there is that glorious flag!

There is a short video showing a scene in the talk show with Günter Jauch. It is just 1:11 minutes long. In the meantime, I do not know who uploaded it. If you haven’t yet seen it, do have a look at it. It is quite interesting. There comes a scene, namely, at the one minute mark, I took the flag out of my suit jacket pocket, and in the first minute, Federal Justice Minister, Heiko Maas also becomes aware of this flag. And then pay attention to the facial expression of the Federal Justice Minister, Heiko Maas.

[Minute 3:04: Interpolation of a scene from Günter Jauch’s talk show in which Björn Höcke displays a small German flag on the armrest of his chair]

Mr. Höcke: I thought I would bring with me the central symbol of our country, and bring a little colour to this historic locale — and I will even do that now. And I will now hang our national flag here on my armrest to show all those present, and also the television viewers, that the AfD speaks the voice of the people against — and this I must say quite clearly — against an all-party policy gone mad.

[Minute 3:38: The scene changes back to the Munich lecture.]

It was very much as if . . . I mean this facial expression — was so constituted as though a crucifix had been held before the visage of Dracula, dear friends. Yes, that is the way it was!

And I only wanted to explain it actually, but it was no longer possible on the talk show. Of course I wished by this symbolic act to point out a sacrilege with which most of you are already familiar. This sacrilege took place during the election party of the CDU in 2013.

For those of you who don’t know, the General Secretary [of the CDU] at the time, — [Hermann] Gröhe by name — but now he has even become a federal minister, hasn’t he? Unbelievable! — this Gröhe — perhaps he had already taken three or four Weizenbier, I don’t know — all of a sudden became larksome and actually began to unfurl the German flag, which he had brought along with him, and even began to wave it around a little bit. Chancellor Merkel saw that, darted toward this clueless man and snatched the fabric from him; with a disgusted expression on her face, she took the flag and carried it from the rostrum.

[Minute 5:10: Interpolated scene of Angela Merkel and the election party flag incident of 2013]

That is a scandal, absolutely.

That is a scandal; and unfortunately, it is only possible in Germany. And this much is also clear: a country with such senior politicians, truly, no longer needs enemies.

Right, and only three hours after the Jauch programme, the media hurricane broke loose. The BILD tabloid headlined in its online evening edition, three hours after the programme: “insane” … “insane AfDler Provokes with German Flag”. As if I had been provocative with a state symbol protected by statute! All well and good; it succeeded, that’s all I can say.

The situation in this country is dramatic. And it may actually be historically unique. One has to understand, that I cannot even compare it with one or another of the Hun invasions or Mongolian tempests which have passed over us and brought enormous suffering; — I am not doing that. The magnitude of the challenge, as one calls it nowadays, is so gargantuan, that it is impossible to assess it. But perhaps it is coming to pass, that this drastic remedy is once again stirring the Germans into wakefulness. Perhaps it is the last chance for our people to once again awaken.

We are not at all willing to hand over our country. We are not willing to become strangers in our own land. We are not at all willing to integrate these people, whom the statistical data show are overwhelmingly male, young, uneducated and Muslim. Since we of the AfD still have prudent judgement up here in our cerebrum, we are saying plainly and with the necessary clarity: these people are no enrichment; they are a burden, economically and as regards our commonwealth, dear friends.

It is certain in any case, that Germany is to be abolished and the Germans are also to pay for their own abolition. That is perverse if you will pardon my saying so.

When Thilo Sarrazin in 2010 was so courageously predisposed — and I believe without Thilo Sarrazin we would not be sitting here today — to characterise Germany as self-abolishing, it is not simply a prophecy of doom, but a reality.

Right, and the future inhabitants of Germany: they are the ones who are now between 20 and 25 years of age, and that is why this age cohort is so important. And unless we initiate a fundamental turn in the asylum policy, this central age cohort will tip the majority ratio by the end of 2016. That would be the end of our people, that would be the end of our culture. And that would be a medium-term perspective, which must turn Germany into a Muslim country. Those are the facts.

And to increase the pressure to assimilate, we require two things: we require first — and this is crucial, for which reason in this field I am a preacher — we require a new love for ourselves. Only if we love ourselves, will we have the attractiveness which draws people from other backgrounds to wish to become Germans. Without that, it won’t work, dear friends.

Peoples have always changed. But a people changes at a snail’s pace. What we have at the moment is a multicultural revolution from above. I reject that, dear friends.

And so, to my closing statement: we, the German people, are no more morally obligated than, for example, the Danes, the Czechs or the Poles, to sacrifice our own and our forefathers’ foundation and lifetime achievements, including even the self-destruction of our commonwealth and its political culture, for the hopes of immigrants. We, the German people, are not obligated to sacrifice our material and cultural substance and our majority-based self-determination in our own country in perpetuity to an immigrant majority of foreign origin. We, the German people, have not only the right; no, we have the duty to preserve for our children a German future in the middle of Europe. Many thanks!