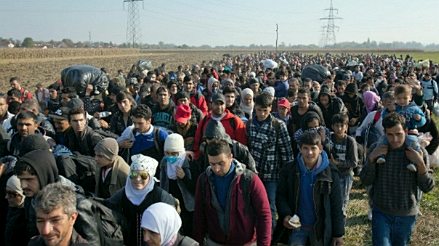 I had an email exchange with one of our British contacts this morning, with the focus on the “refugee” crisis. At one point in the conversation, referring to the German government’s immigration policy, our correspondent said:

What they have done there is breathtaking, truly astonishing. And there will be another two million next year trying to get in, at the very least. Not counting all the “family reunification”.

Below is an excerpt from my reply:

That will put Chancellor Merkel in a hard place. In order to keep those invaders warm, she will have to move them inside. But there aren’t enough king-sized heated tents for them, and I don’t think Germany can manufacture new ones quickly enough. She will have to empty more schools, hotels, and privately owned buildings to get them indoors. But even that will be a huge logistical undertaking.

When she attempts that, there will be a lot of blowback. Good, obedient Germans will go along with things for a while, because that’s their nature. Seething with concealed anger, but obeying orders, jawohl. For a while. Until they reach that tipping point. And then their reaction will make PEGIDA look like a Sunday school picnic.

I have no idea how it will turn out, but it has become clear that it cannot possibly end well. There is no way out of the current mess without untold misery, suffering, and death on one side or the other, probably both.

Mrs. Merkel is already on shaky ground politically. I doubt she will last out the winter. But she’s a “conservative” — who will govern Germany after her? The SPD (Socialists)? Then the migrants will get even better treatment — elderly citizens forced to move out of their apartments and into care homes so that twelve migrants can use the space. That sort of thing.

AfD is still a tiny splinter, and relatively timid at that. The NPD are hothouse neo-Nazis controlled by the government. Die Freiheit has a very small footprint.

So I just can’t see how this will all shake out. My crystal ball is cloudy…

45 thoughts on “Through a Glass Darkly”