The following video is a slick professional-quality piece produced by the German Federal Agency for Migration and Refugees about the asylum process. It shows the individual steps that have to be taken in order for a migrant to receive refugee status and permanent residency in Germany.

The video serves two propaganda purposes simultaneously: to show “refugees” the procedures they are to expect, and to highlight to the German public how every part of the asylum process is clean, orderly, shiny, and non-threatening. 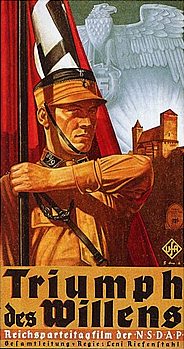 It’s an effective piece of cinematic propaganda. Leni Riefenstahl would have admired the techniques employed by the filmmakers. Mind you, their ideological thrust is different from hers — diametrically opposed, in fact. This is propaganda designed to sedate the German people while they abolish themselves, rather than to raise their morale for the coming conquest of inferior races.

But in certain ways the purpose is the same: to usher the viewer from a less-than-ideal reality into a world of heartening fantasy. The scenes portrayed in the movie have nothing in common with the filthy mass encampments, the nightly brawls in the asylum centers, the rapes, the threats, the intimidations aimed at European citizens. Everything is wonderful and smiling and harmonious in this imaginary Asylum World.

Chancellor Angela Merkel said: “We can do it.”

She might as well have said: “It takes a Triumph of the Will.”

Let’s assume that the asylum process as represented in this film is accurate. It’s very labor-intensive, involving a dozen or more state employees for a protracted period. We’ll make an optimistic guess, and assume it takes fifty man-hours of time on the part of the asylum center employees and agency bureaucrats to process Herr Abbas’ case.

Germany is expecting a million new immigrants by the end of this year, and another two million next year. These numbers will thus require 3,000,000 × 50 man-hours of labor on the part of native Germans. That’s 3,750,000 man-weeks (assuming a forty-hour week) or 72,000 man-years. If the asylum process for all of these migrants is to be completed in a year or less, this means that a minimum of 72,000 employees must be engaged in processing them. And, presuming that some of those employees have additional duties, the number would probably be somewhat larger — 150,000, 250,000, maybe half a million. Just to process the first two tranches of “refugees”.

How sustainable is this? How much will such a process cost?

And most importantly: How likely is it that all of it will actually be completed?

18 thoughts on “Triumph of the Will”