Earlier this month Elisabeth Sabaditsch-Wolff paid a visit to the Washington D.C. to take part in the annual ACT! For America conference, and take in the Tea Party sights on Capitol Hill. Below is her report on the trip. 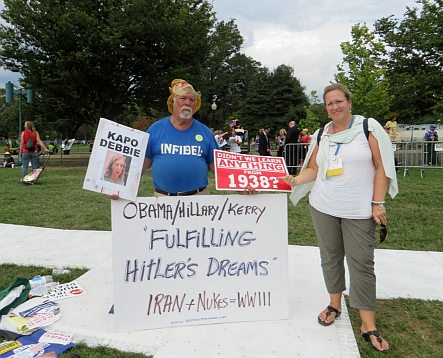 I travel to Washington DC — the wretched beehive — on an annual basis, first to attend the ACT! For America Conference and Legislative Briefing, and secondly, to use the opportunity to brief selected members of Congress about the current state of affairs in Europe.

Naturally, the so-called “Iran Agreement”, which was to be decided in Congress, was at the top of everyone’s mind and list. However, other topics of discussion were the extent of the present immigration catastrophe in Europe, plus the broad and worrisome encroachments on freedom of expression in Germany and Austria.

During my briefings I raised the issue of the accelerating loss of freedom of speech, using selected examples to illustrate what I was describing. For instance, there are confirmed reports of snitching among co-workers with regard to the so-called asylum-seekers — employees are warned not say or write anything disparaging about these poor “migrants”. In another example, a bus driver in Germany was fired for wearing a t-shirt manufactured by a company deemed right-wing extremist. And finally, a young apprentice working for Porsche was fired for posting a — undoubtedly — less than intelligent comment on Facebook. He was never given a chance to apologize.

I also discussed questionable decisions made by the Austrian judiciary. One case in point was a judge’s allowing for Heinz-Christian Strache, the leader of the largest opposition party, to be compared to Adolf Hitler. On what grounds, you ask? “Because it is based on objective fact.”

In this connection, I would like to draw attention to the new amendment to criminal law, which will be in force at some point this fall. It will include the punishment of mental crimes, and calls for the unconditional acceptance of certain facts, such as genocides recognized by the court, including Srebrenica and Armenia.

For more about this illiberal new law, see this translated article.

Concerning asylum-seekers, migrants, and refugees: I discussed the lack of any definition for illegal entry to Austria. The Schengen Agreement is responsible for the open internal borders, and calls for strong external border control in Greece, Italy, Malta and other countries at the periphery of the EU. Schengen has shown itself to be ineffective, and should be considered a failure. This comes as no surprise to those critics who have been vilified for many years for pointing out this ineffectiveness.

Who is vetting the hundreds of thousands mostly young and strong men? Who can guarantee that there are no ISIS fighters among the trekkers carrying the latest cell phones and wearing what appears to be designer jeans? Should the EU not take seriously ISIS’ threats to sending mujahideen disguised as refugees? And, in a disgusting move, the Austrian chancellor insinuated that the Hungarians’ reaction to the current situation, namely applying and adhering to Schengen rules, are a reminder of “dark times”. We are indeed witnessing dark times, but certainly not of the sort Mr. Faymann alluded to. We are witnessing the demise of the nation state, of the rule of law, of freedom.

What should we do about this state of affairs? First, we must leave the broken and ineffective Geneva Convention. It no longer serves a purpose and worsens the situation. Second, a state which cannot secure its borders is no longer a state: secure our borders! Immediately! Third, we must vet every single person entering the Schengen area. If this fails, we must protect our own borders and leave Schengen. And finally: Why not just follow laws instead of breaking them? This should apply to the EU and its member states as well as the refugees.

The EU is dishonest, both to its population and to the migrants. There is no money; we are all essentially broke. There are no jobs to be had, especially for low-skilled workers with no language skills. Moreover, there is dishonesty in the public narrative. No dissenting opinions are allowed: many parents are now actively telling their children to either shut up in school or utter “The migrants are so poor,” so that there are no repercussions. The media is gleichgeschaltet again; there is a complete lack of balanced discussion in the newspapers, the radio and television. There is a level of brainwashing that Goebbels would have been proud of. He must be smiling up from hell.

Only a handful of journalists have so far asked questions about two major problems:

In my briefings with Congressmen Louie Gohmert (R-TX) and Jeff Duncan (R-SC) as well as retired USAF General Thomas McInerney and retired Admiral Ace Lyons, I noticed a high degree of knowledge. This is very encouraging. There was special concern about European limitations on freedom of expression, since this stands in stark contrast to the First Amendment. This was also made clear to me upon entry to the USA, by the responsible immigration official. (The official asked why I had a visa in her passport, since Austrian citizens can enter the USA on a visa waiver program.) 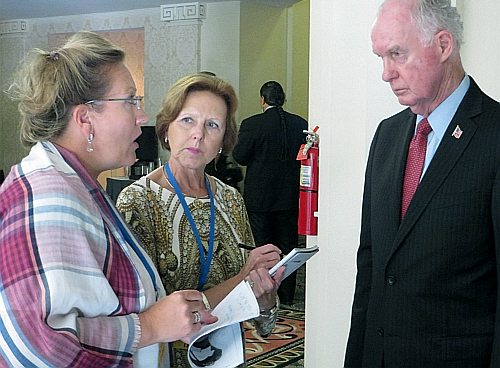 Another fixed point was participation in the presentation on the Iran agreement, which included more than two dozen of the best-known US conservatives, and the Tea Party. For further information in English, see the American Thinker. 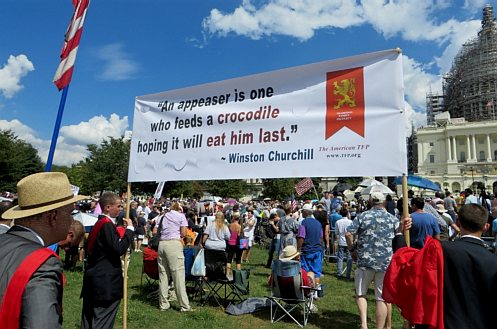 Despite the heat, thousands of demonstrators showed up on Capitol Hill to express their dislike for and rejection of the agreement. It was interesting to learn from Congressman Gohmert that the agreement was not to be evaluated as such, but as an international treaty, and yet through a legalistic trick, was not being brought to Congress as a treaty. This has consequences for the effectiveness of congressional votes, but also for us in Europe, because this agreement is a dangerous one for world peace, as was noted in the course of the ACT! For America conference by countless members of congress and analysts. 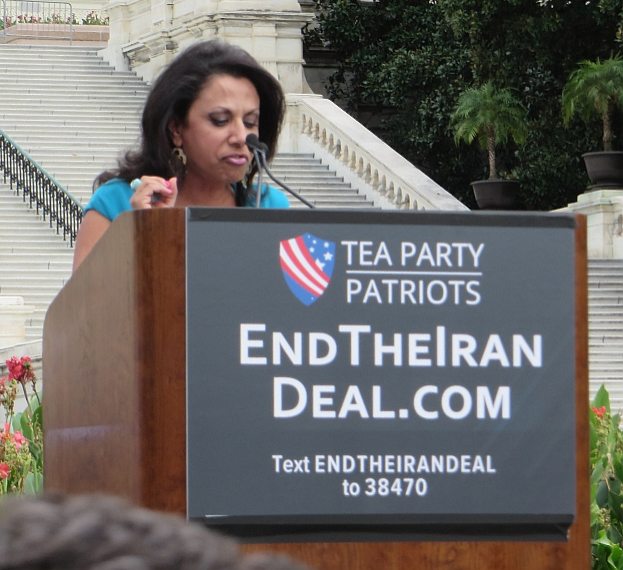 Clearly, one of the high points was meeting Ayaan Hirsi Ali, the author of four books and a former refugee. An incredibly warm-hearted woman who radiated calm, while still bringing a great deal of knowledge and insight in her speech. The most important statement in her comments was the call for a functioning constitutional state, with all that entails. 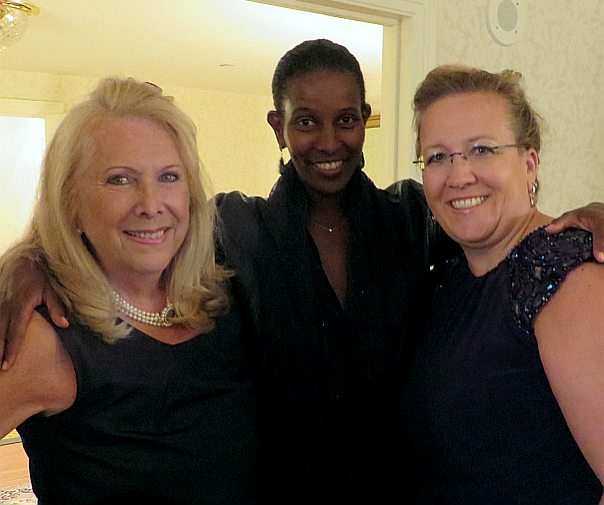 At the end of the week, CBN’s Erick Stakelbeck interviewed me, with the interview scheduled to air on September 22. 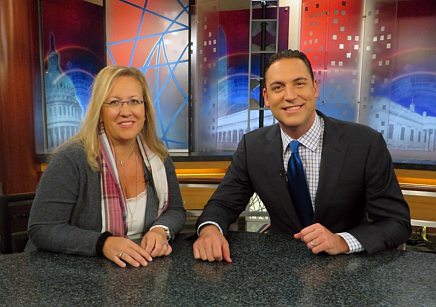 On the basis of the countless personal contacts — the renewal of old ones as well as the establishment of new ones, I consider this trip one of the most successful in recent years. All planned appointments could be kept, which certainly could not have been expected considering the events of the week regarding the Iran agreement. 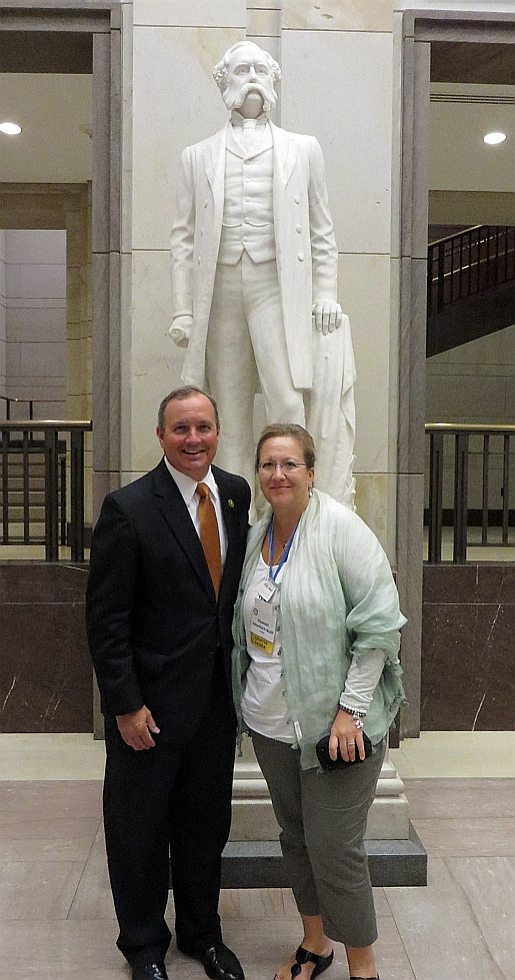 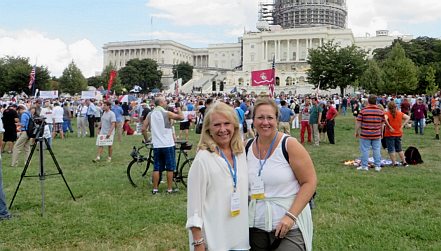 Valerie Price and ESW at the Capitol Hill Tea Party

I owe a debt of gratitude to JLH for translating the German-language report I presented to BPE, which was adapted to make this report.