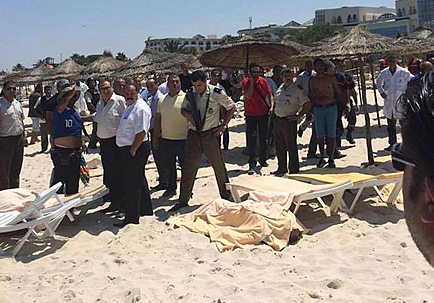 The Algerian-French auto-pundit Aldo Sterone is back, this time with a discussion of the recent terror attack in Tunisia, and parallel developments in Algeria.

He raises some interesting points about the possible complicity of the security services in last week’s massacre on the beach at Sousse. Tunisia is a relatively secular country, as Islamic countries go. However, the Muslim Brotherhood is popular there, and the Ennahda Movement did well during the “Arab Spring”. It seems likely that there is a fair sprinkling of “radicals” among the country’s police officers.

Update: Our French correspondent Nathalie sends the following adjustments to the translation. The subtitles and transcript will not be altered, so just bear these in mind when watching the video and/or reading the text.

At 3.12: Vicieux in French should be translated as lewdly, not vicious.

At 7.45: Slip was not translated. It means underpants. So it should read: “is that it wants to get between man and his underpants”. The same in the following sentence: “to get between the woman and her slip” should conclude with “…and her knickers/panties”.

12 thoughts on “The Islamization of Tunisian Beaches: Were the Police Complicit?”