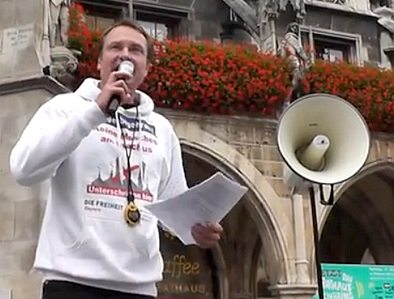 The following op-ed by Michael Stürzenberger directs withering scorn at the Christian Democrats in Germany, who are in the process of selling out for the Muslim vote. JLH, who translated the essay, includes this note:

Michael Stürzenberger rides again. Here is his pithy take-down of the CDU’s hypocrisy, with a little opprobrium thrown in for the faint-of-heart such as Kathrin Oertel. Reading this, it is obvious why he is as popular with the political establishment as Lenny Bruce at a meeting of NOW.

The translated piece from Politically Incorrect:

One day after a total of four Islamic terrorist attacks shook the world comes the customary chummy reaction from the CDU (Christian-Democratic Union). This time, not an official mosque visit with a robotic recitation of the same old song — all this naturally had “absolutely-nothing-to-do-with-Islam.” This time, we are assured by “C”DU General Secretary Tauber that the party wishes to be even more open to Muslims. Naturally, to gain access to new voters and members. Opportunistic party strategists have recognized: Soon there will be Muslim majorities and, since no one has the courage to recognize Islam as an existential danger and de-fang it, that leaves appeasement and snuggling up to the rulers-to-be.

In BILD, we read:

CU General Secretary Peter Tauber told BILD: For many believing Muslims, the “C” in our party name indicates “that in the Union, religious freedom is highly valued as are people with a religious consciousness.” The “C,” he says, is an invitation to everyone, because many people share the values that stand behind the “C.”

The big hitch in this is that Islam does not share in the same values in the way Mr. Tauber describes. If you happen to be a Christian, you will be told that the Koran says you are damned, worth less than an animal and after you die you will burn in Hell. Until then, your miserable existence will be subjugated to Islam and you will spend your worthless life as a dhimmi.

Bottom line: what the CDU is unfolding here is a self-subjugation strategy, which I have already encountered in this form in the Munich CSU.[1] There, you find the attempt to crawl humbly up into the small intestine of the shady Imam Idriz, in an attempt to facilitate the gigantic Islam barracks in Munich for him. The leader of the Munich CSU at the time told me:

“No more successful election in the future without Muslim voters.”

So the propaganda is broadcast that “Islam is peace”, and Muslims are brought into the party to be charmed. In the hope of making points with the rapidly growing Muslim voters. As a pleasant side-effect, there is approbation from the left-tilted media and the public infected with do-goodism, for the “intercultural sensitivity” and “openness to the world” and that adds yet more approval from the camp of low-information voters. The CSU integration expert Martin Neumeyer was already playing the same tune in 2007:

“The CSU must attract Muslims.”

Shades of the fateful appeasement of Hitler and the National Socialists. This sucking up by now seems to have become the mode even with people previously known to be Islam-critical. It is really annoying to see photos of the hijabbed ex-PEGIDA front woman Kathrin Oertel with other Muslim women. Has the Saxony CDU drawn even the DdfE[2] leader over? In her capacity as leader of this PEGIDA offshoot, Oertel had at the end of January met with Saxon CDU interior minister, Markus Ulbig. Since then, she seems a little confused about her system of coordinates. For instance, her broadcast of May 21st:

“NATO propaganda is very dangerous, because it pushes people into war and from that come many, many disputes. For instance, the subject of Islam and the bad Muslim. That is clearly due to NATO propaganda.”

It takes a massive ignorance of Islam and its historical development to believe in all seriousness that NATO and the Americans are responsible for its bad reputation. But Oertel seems convinced. So, at the end of April in a video message, she apologizes to Muslims for the “harassment campaign” unleashed by PEGIDA. After all, so many Muslims are living among us peacefully. She now seems to be filled with “inter-religious understanding” and visits a mosque with an awe-stricken expression. The PI commentator “lorbas” claims she has recently caught sight of her shopping,

[photo of woman on the street in standard black burka]

and traveling by taxi.

[photo of several women in typical blue Afghan burkas, crammed into the back of a hatchback]

It is of course impossible to offer verifiable proof of identity in these cases.

So back to “C”DU General Secretary Peter Tauber:

His intellectual inclination is demonstrated not only by his Islam-green tie but by his comments on PEGIDA:

“The PEGIDA people are playing a dishonest game,” says CDU General Secretary Peter Tauber today in an interview with Tagesspiegel. Their 19 theses, he says, have just been thrown out to give the appearance of political correctness. He finds it much worse, that they are fostering the idea that the political establishment does not care.

Anyone who would like to inquire of Peter Tauber whether his party would like to re-name itself the Muslim Democratic Union (MDU) may reach him at: peter.tauber@cdu.de

Previous posts about Michael Stürzenberger and Die Freiheit in Munich: