Our Australian correspondent Julius O’Malley pays a virtual visit to Blighty to investigate a bizarre new multicultural policy implemented by the Metropolitan Police. 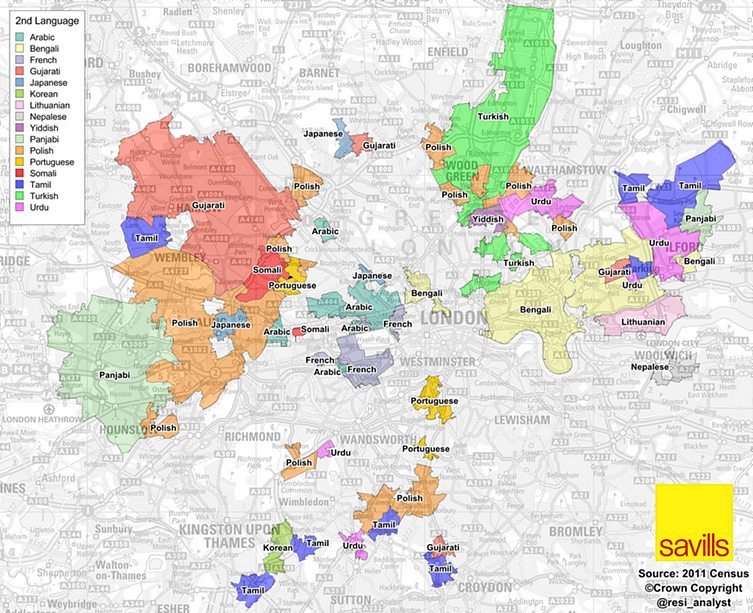 Politically Correct Babel on the Thames

On July 20th 2015 a new mandatory requirement for employment by the London Metropolitan Police was introduced: applicants must be fluent in a second language other than English. That police force, ‘The Met’, is understandably the UK’s largest.

One might think this was just part of the relentless ‘upskilling’ of acceptable police recruits that has taken place in the Western world since around 1980. You know, whereas 35 years ago one needed only a 9th-grade education in Australia to join the police force, then a “School Certificate”, i.e. 10th-grade attainment was made an essential pre-requisite.

Then they dropped the minimum height and weight requirements that had been around for a century because these were “discriminatory”. So there are 5’2″, 100lb police officers; lots of them, because such undersized people are attracted to the sense of personal power that being a police officer affords.

Then they raised the educational bar again to require a “Higher School Certificate”, i.e. 12th-grade education, which was once the preserve of the smallish minority of teenagers who intended to embark on a tertiary education. I await the introduction of a degree in sociology as mandatory, with a master’s degree as a desirable qualification.

But it isn’t just upskilling, because the second language must be one of fourteen prescribed ones. The list’s inclusions and exclusions are mind-boggling, if the purpose of the mandatory requirement is to catch and assist in the prosecution of criminals in London; hopefully at least a consideration in police recruitment practices. The languages (as they appear in the very odd order on the Met’s website) are:

What is the ostensible purpose of requiring police officers to be able to speak one of the above 14 languages? From the 20 July Daily Mirror article:

‘In a press release, the Met said the requirement is a one-month ‘pilot’ scheme designed to “bring officers into the Met with more of the skills necessary to help police and engage with London’s diverse communities as effectively as possible.”

However, the Met does not specify that the new qualification is temporary on its website.’[2]

There is good reason to believe it will not be temporary, and has merely been initially floated as such by (non-binding) press release to test levels of public hostility. In the absence of howls of sustained public protest it will just stay.

First, the inclusions: German. German?! A map of London’s ethnic neighbourhoods (see the top of this post) may provide assistance here. There is no German ethnic neighbourhood on the map, nor any known to Londoners. There are no reported German crime gangs in London, and Germans don’t figure in the crime statistics. And even if there were a discernible problem with German crime in London, or Germans were a notable victim group, it was sagely pointed out by a Conservative politician that Germans living in London speak English very well. Given that most Germans in Germany do, this is indubitably so.

In second place we have Hebrew! Truly bizarre, as any Israeli living in London will, like any German, speak English, and there are only about six million Hebrew-speakers in the world. The London map doesn’t show a Hebrew-speaking neighbourhood; it does show a Yiddish-speaking neighbourhood. So the inclusion of Yiddish would make more sense, were it not for the fact that the vast majority of Yiddish-speakers living in London also speak English.

The exclusions are even more strange. I thought: Don’t they speak Urdu in Pakistan? Why isn’t it in the Met’s list? According to a Daily Mail bar graph, the fourth most spoken non-English language is Urdu[1].The answer is that the Met has for decades assiduously sought Pakistani-origin recruits to match the huge — and grossly over-represented in the crime stats and prison numbers — Pakistani population. So after this sustained effort they must have enough Urdu speakers on the force.

Another bizarre exclusion can be determined by looking at the map above and checking to see what language is signified by that huge salmon-coloured blob in north-west London. Gujarati, according to the same 2013 bar graph, is the third most spoken non-English language in London. Maybe they’ve already got enough Gujarati police officers. The map also shows numerous and/or sizeable and Tamil, Somali, Korean, Japanese, Nepalese, Lithuanian — a single, surprisingly large, contiguous East London bloc — and French-speaking neighbourhoods. I suspect I know why the Met did not include French as a prescribed language, which I’ll address below. One would think it wouldn’t hurt to have some Somali police officers in London, given the recent prominence of that ethnic group in terrorist activities and crime in Europe. Considering the education levels and language skills of Somali migrants to the West, I doubt they’ve been deluging the Met with job applications.

Speaking of crime: why aren’t Russian and Albanian on the Met’s list? Are the stories about the presence of the Russian mafia in Europe all apocryphal? London is a popular place for Russians who have made their money in shady — to put it at its most benign — ways. It is estimated that more than half, at the very minimum, of London’s brothels are controlled by Albanian gangsters — as they are in Switzerland, France and many other European countries — and a good proportion of the heroin trade is, too. I’m not going to provide a source: just Google “Albanian organized crime” and be stunned at the extent to which, according to Swiss police intelligence, they dominate and control so many market segments of crime committed in Switzerland. Liam Neeson’s “Taken” trilogy is not fanciful in terms of the culprits’ ethnicity. Any European police force seriously needs Albanian speakers to do its job. In fact, without Albanian speakers the Met is fatally weakening its capacity to enforce a wide range of the criminal laws. And Albanian isn’t a terribly popular ‘A-levels’ language, so it’s not likely that any recruits called Harris, Edmondson or Murphy are going to be able to speak it.

The Mirror article also noted the strange omission of Mandarin from the Met’s list. Are there any Chinese people in London? The presence of so many Chinese restaurants would suggest there are at least a few. And there were even some in the 1881 census. Maybe they’re all Cantonese speakers who came from Hong Kong. Oh wait, Cantonese isn’t on the list either. Irritatingly for me, but no doubt far more for the Chinese, Japanese and Koreans, the British, both officially and unfailingly in the media, describe people from the Indian sub-continent as “Asians”. Those child-rapists in Rotherham were never described as Muslims (heaven forbid!) or Pakistanis, just as “Asians”. The UK authorities can’t even be bothered to draw a statistical or descriptive distinction between “South Asian” and “East Asian”.

In the Mirror article Andrew Boff, leader of the Conservatives in the London Assembly, mentioned that:

“Chinese* Mandarin is not on there when we know that statistically they are one of the groups most likely to be victims of crime in London.”

* Please note that Chinese Mandarin is a completely different language to Iranian or Angolan Mandarin!

So why doesn’t the Met include Mandarin and/or Cantonese in its list? A lot of Chinese (and Vietnamese) crime in Australia is intra-ethnic, i.e. Chinese-on-Chinese. However, if the same applies in London, wouldn’t that make it even more justified to have Mandarin and/or Cantonese speakers? Maybe the reason for the exclusion is because the Chinese are more affluent than average, and don’t need jobs in the public sector. Maybe this also explains the omission of Gujarati and Japanese. Maybe the whole language list thing is just another device for bringing selected, “disadvantaged”, minorities into public-sector jobs, and has nothing to do with policing goals at all. The inclusion of German and Hebrew would seem to be just to make this targeted minorities-hire policy less obvious, in the confident knowledge that almost no German or Israeli Londoners are going to apply. German?! I still can’t believe it. I can just see the headline “Metropolitan Police Chief mystified and disappointed at failure to attract German and Israeli applicants”.

Why is French not included in the list? The map shows a number of French neighbourhoods in London. With the large number of Francophone MENA and West African illegal migrants making their way to London in recent years, one would have thought there’d be an increased need for French-speaking police officers. Perhaps the reason for the exclusion of French is because far too many “Anglos” speak French, having learned it at school, and the real purpose of this new recruitment pre-requisite would be defeated if a whole bunch of Smiths, Macleans and Coopers applied to join the police force. Maybe, like the Japanese Londoners, the French Londoners are too affluent to need a helping hand into an unskilled public sector job.

The actual purpose of this “temporary” change to recruitment criteria is probably “diversity”: the Met wants more ethnics on the force. If policing goals were the true goals of the Met in this, it is inexplicable that Russian and Albanian are not on the list. UK police forces have already been bending over backwards for decades to attract and admit — with specially lowered thresholds — minority hires. Ignoring any evidence that casts doubt on the wisdom of doing so. Along with the usual accelerated, undeserved, promotions for the targeted ethnic groups. The UK police forces’ rigorously applied “Equal Opportunity” employment policies aren’t enough to do the job; what they need at least for a while is a policy that explicitly precludes the vast majority of Anglos from applying without being overtly “racist”. And they’ve hit upon the perfect device: a selected list of essential second languages.

Senior UK police commanders have been wringing their hands in angst and shame in recent years over the fact that whilst “Asian” Muslims form 3x per cent of the community, only x per cent of police officers are Asian Muslims. That studies, including police internal investigations, show that Asian Muslim police officers in Britain have proven highly problematic; for “cultural reasons” they are prone to be, ahem, somewhat reluctant to enforce the law against their co-religionists/co-ethnics. Well they may be more corrupt, but at least our diversity profile looks PC! It’s a bit like the US army saying of Major Nidal Hasan at Fort Hood: “Oh, well, he proved to be a psychopathic mass-murdering Islamist, but he looked good on our diversity hire profile!” Oh wait, the US Army Chief of Staff basically said just that.

The Met’s Commissioner Sir Bernard Hogan-Howe said: “I am committed to providing a police service which looks and feels more like London. We know that almost 300 languages are spoken in the capital. We need to recruit and deploy officers with second languages in areas where those languages are spoken. I believe it will help boost confidence, help to solve crime more effectively and support victims and witnesses.”

One can just see that guff being scripted by some HR policy hack at HQ.

22 thoughts on “Politically Correct Babel on the Thames”