In a follow-up to his previous essay, our Australian correspondent Julius O’Malley takes a look at the asylum industry in Europe, with a particular focus on the Italian migrant crisis. 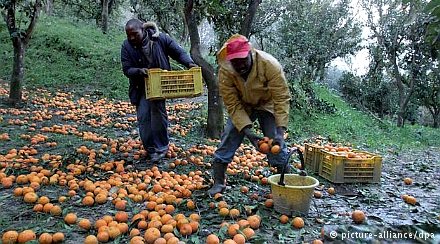 Italy Has a Problem
by Julius O’Malley

In my preceding essay “Saying the Unsayable” I wrote that the success rate in Italy for refugees and asylum seekers had been around 40% since 2005. This was not based on hard data, but on various media and agency estimates, because the records of the United Nations High Commissioner for Refugees (UNHCR) don’t extend beyond 2005. The UNHCR is presumably still interested, but hasn’t got around to compiling the numbers for Italy for a decade, it being such a backwater in terms of illegal immigration these days.

The context for the above figure of 40% was an attempt to explain the huge proportion of arrivals in Italy who did not apply for asylum/refugee status. It is reasonably thought to be at least partially due to the relatively low success rate for applicants in Italy as compared to the UK and other northern European states. The website “asylumineurope.org”, produced by the Italian Council on Refugees, the European Council on Refugees and Exiles and the Asylum Information Database, in its most up-to-date statistics, notes that between 1 January 2014 and 27 August 2014 the Italian Navy calculated that 106,000* illegals arrived in Italy by boat. Between January and August 2014, however, only 36,000 of such illegal immigrants applied for asylum in Italy. So it’s now a 34% application rate, not 30% as stated in my earlier essay. 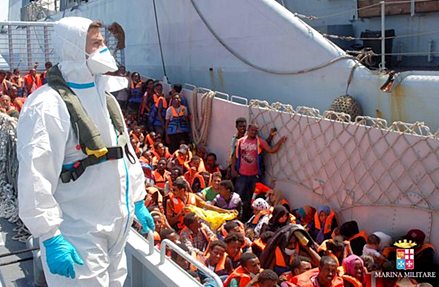 The website notes that the reason for this “strikingly low” rate of application in Italy was due to the wish of illegal immigrants to move on to other EU countries such as Germany, the Netherlands or Sweden. In a minor masterpiece of euphemism, the website’s authors describe these preferred non-Italian destinations as “where they can count on the support of friends or relatives, more job opportunities and more protective welfare systems”. In that order of course, the “more protective welfare systems” being a very distant third in terms of significance. The job opportunities for unskilled workers who can’t speak German, Dutch or Swedish being so much greater in those three countries — with their almost totally unmechanized agricultural sectors — than they are in Italy.

Sarcasm aside, it is in the Italian agricultural sector where MENA and Sub-Saharans can actually find work, picking fruit and tomatoes (yes, I know technically they are fruit) or working on construction sites. Many of those so working are known as “irregolari”, i.e. irregulars, because their immigration status is as illegals and they work in the black economy. They are said to be exploited by being paid lower wages than Italians receive. Consider this extract from a heart-rending news story:

Piles of laundry in car wrecks, camping stoves and tents under highway bridges. Whoever walks through Milan with open eyes sees the traces of the “irregolari,” the people with no official immigration status. They live in abandoned factories or houses without any gas or electricity.

Khaled from Tunisia has been working in Italy for two years. The 42-year-old sleeps in a broken-down car without license plates. The trunk is locked and holds his valuables and his laundry is neatly stacked on the backseat. One of the windows is broken and at night the temperature drops and the cardboard he uses to cover the hole doesn’t keep out the cold.

After spending eight months in a refugee camp on Lampedusa he was transferred to a camp on the mainland from which [he] escaped from there. Looking for work, he stopped in Milan. Every morning he goes to a roundabout near the highway where a group of Africans is already waiting. In his backpack he’s got a bottle of water and two sandwiches.”

Now, another way of looking at Khaled’s story is he paid “people smugglers” for his spot on a boat, and then illegally entered Italy. He was fully sustained without working for over eight months — not an option in Tunisia — in refugee camps at Italian taxpayer expense, then freely chose to abscond from his free lodgings and live the life of an undocumented day labourer. Why did he abscond from an Italian refugee camp to work in the black economy? It is reasonable to infer that he applied for refugee status and failed to get it or that he deemed his prospects of obtaining it so slim he didn’t bother trying. 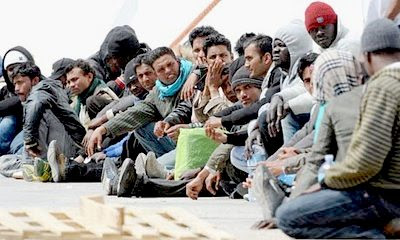 All in all, I’d say he’s done relatively well: he’s still in Italy and if he wanted to go back to the life he left behind in Tunisia, the Italian government would pay his airfare in the blink of an eye. That he doesn’t exercise this option is telling. In 2006 Italy passed a law making illegal immigrants eligible for citizenship after they’d lived in Italy for five years. Perhaps he’s waiting to clock out his five years. Perhaps living in an immobilized car in Italy and scraping by on casual laboring work is better than living as he did in Tunisia. He could always get some discarded plastic sheeting and tape up that window opening.

What indeed is a “more protective welfare system” in refugee industry parlance? Why doesn’t it simply state “more generous”? Because the generosity of the welfare systems, whilst important, isn’t the only draw for these countries; “protective” is a euphemism for “more likely to grant applications for asylum”, i.e. a softer touch.

The pro-refugee website notes that the asylum seekers/refugees are so determined to reach destinations other than Italy that they refuse to be fingerprinted — the only sure way to identify undocumented illegal immigrants. They refuse to allow the Italian authorities to fingerprint them because they don’t want to be identified in another country as having first arrived in Italy. If they were, pursuant to something called the Dublin Regulation, this would entitle the other country to promptly return them to Italy. There may not be a fingerprint-matching database that could do this — imagine that in France they have the resources to cross-check annually 110,000 sets of fingerprints received from the Italians — but they’re not taking any chances. 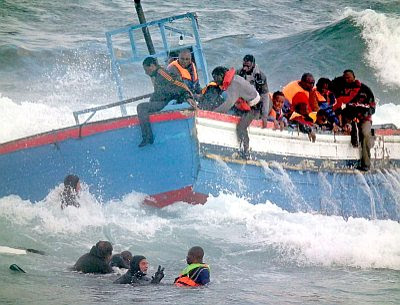 Hmmm: they are rescued from their overcrowded, unseaworthy vessels by random merchant ships, honouring the law of the sea to help any craft in distress, and then assisted by the Italian navy safely to terra firma. There, on Lampedusa or in Sicily, they are housed, fed, clothed and provided with health care by Italian government agencies. But they refuse, and apparently somehow have the right to refuse, to be fingerprinted by the very government that has rescued them and looks after them. How about: no fingerprints, no food? Perhaps the Saudi Arabian method is the way to go: Somalis who arrived in Saudi Arabia are promptly put on the first plane back to Mogadishu. Of course Saudi Arabia is a signatory to all the same international refugee conventions and treaties that Italy is, just as it is a signatory to both the International Conventions on the Rights of Women; they just disregard them.

We’ve all seen the plethora of news stories excoriating Saudi Arabia for breaching its international humanitarian obligations in relation to refugees and asylum seekers. Well, I haven’t seen any actually, but surely they’re out there? Oh, I forgot, Saudi Arabia isn’t a Western country, it is a poor, struggling Third World country that can barely afford to keep its 1,500 princes in Mayfair townhouses and Marbella beach apartments. So it gets a pass for its lapses.

Back to refugee application success rates in Italy. I have since come across a publication by the Italian Council on Refugees that provides up to date statistics, it was updated on 28 May 2015, on refugee/asylum seeker applications. It makes for interesting reading. The success rate in 2013 was not 40%, but 59% very close to the UK’s. Actually, it provides a “Rejection rate” of 32% and then three categories of “protection status” granted — “Refugee Status”, “Subsidiary Protection” and “Humanitarian Protection”, whatever the hell each of those last two mean and how they differ from the first — which collectively add up to 59%. The reader has to do the adding. One notes that 59 and 32 don’t add up to 100; where the missing 9% are and what they represent is anyone’s guess. They can’t, in May 2015, be undetermined applications from 2013, but maybe they can. 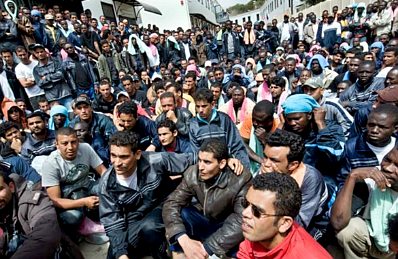 In any event, it seems that if an illegal immigrant doesn’t qualify as a bona fide refugee, he (92.3% of applicants in 2014 were adult males) can have a shot at one of the other two categories. Only 3,310 out of 27,930 applicants were granted refugee status in Italy in 2013, by far the smallest of the protection status categories. The rejection category is noted as being for those who were rejected “in merit and admissibility”, whatever that means. It would seem though that you have to fail on both counts to fail to qualify for any one of the three “protection status” categories. Such is the chocolate wheel of the asylum seeker industry.

Where do these applicants come from? In 2013, the largest two sources were Nigeria and Pakistan. How does one get from Pakistan to Libya? Fly Emirates?

52% and 51% of them, respectively, were rejected. 76% of Somali and 66% of Afghani applicants also failed to obtain refugee status in Italy, but fear not, they were successful in obtaining instead “Subsidiary” protection status, so their failure was of no practical consequence. Another 10% of Afghani applicants got “Humanitarian” protection status, so, with 16% getting “Refugee” status, fully 92% of Afghans didn’t waste the price of their tickets on the Ariana Afghan Airlines flight from Kabul to Istanbul or Jeddah, the airline’s closest destinations to Libya.

In 2014 the largest two sources were Nigeria and Mali. The Malians have apparently cottoned on since 2013 when only 1% of applicants obtained refugee status, but 60% obtained “Subsidiary” and 28% obtained “Humanitarian” protection status. Word must have got out in Timbuktu that it doesn’t matter if you’re not really a refugee when you claim to be one, for in Italy you have an 88% chance of getting legalized anyway. Again, whilst the 2014 table, like the 2013 one, is qualified to providing only acceptance or rejection rates at first instance, i.e. the rejectees’ appeal rights have not yet been exhausted, the numbers don’t add up. Of the 65,000 applicants out of 106,000 arrivals — the application rate has near doubled in a year to 61% — there is a missing 30,000. Presumably their applications haven’t yet been processed. So the 2014 rejection rate of 38% may be too high because the final tally isn’t in yet.

Italy has a growing problem with illegal immigration, but the way it administers its refugee/asylum seeker apparatus isn’t helping matters any. They’re making themselves an easier target rather than a harder one.

17 thoughts on “Italy Has a Problem”