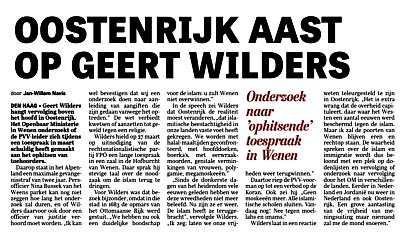 On the same day that an opinion poll conducted by the Dutch state broadcaster revealed that the Party for Freedom (PVV) is now the biggest party in Netherlands, the country’s major newspaper De Telegraaf announced that Austria is launching a criminal investigation against Geert Wilders, the leader of the PVV.

Below is the translated article from De Telegraaf:

Geert Wilders is facing prosecution in Austria. The Public Prosecutor in Vienna is investigating whether the PVV leader is guilty of incitement during a speech last March.

In the Alpine state, there is a maximum sentence of two years for this offence.

Press Officer Nina Bussek of the Vienna prosecutor’s office cannot say how long the investigation will take, and whether Wilders will also be questioned by a prosecutor. “I can confirm that we are investigating following complaints against declarations he made during the event.” The [Austrian] law prohibits hurting religious feelings or inciting to violence against a religion.

On 27 March, Wilders gave a long speech in the Hofburg in Vienna at the invitation of the right-wing nationalist party FPÖ. He spoke in strong language about the necessity to reduce Islam.

Wilders’ visit was special, because Vienna is the city where, in 1683, the rise of the Ottoman Empire was halted. “Also today, we have a clear message for Islam: you will not conquer Vienna,” Wilders said.

In his speech, Wilders said that Austria had to change the present reality, “that Islamic brutality has gained a foothold in our countries. We are confronted with halal meals, with headscarves, burqas, honor killings, female genital mutilation, polygamy, mega-mosques.”

“Since the darkest days of paganism many centuries ago, we have not experienced these atrocities anymore. Now they are back. Islam has brought them back,” Wilders continued. “I say: let us regain our freedoms.”

To this end, the PVV leader called for a ban on the Koran. He also said “No more mosques. Close all Islamic schools. Today! No to mullahs and imams.”

In response, Wilders expressed his disappointment in Austria. “It is particularly ironic that the authorities capitulate there where a few centuries ago the West was protected against Islam. But I will continue to honor the gates of Vienna and stand upright. Speaking the truth about Islam and immigration is thus rewarded with a place on death lists and prosecution or investigation for prosecution by the Public Prosecutor in several countries. Earlier in the Netherlands and Jordan, now in the Netherlands again and in Austria. This is a major attack on freedom of speech, but no one will be able to silence me.”

The latest poll, showing the PVV at 28, five seats ahead of its closest rival: