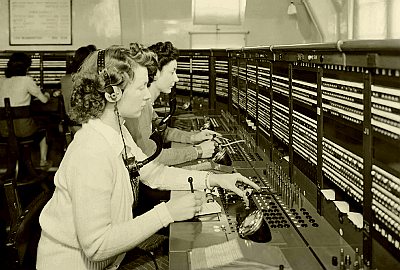 This has been an eventful fundraising week so far. In addition to all the hope-not-hate foofaraw, we have now endured two major phone and internet outages (so far). Talk about a dearth of crucial resources — it’s as if Fate were conspiring to provide grist for this week’s rhetorical mill.

The first outage was on Monday night, in the midst of a heavy thunderstorm. That’s par for the course — lightning strikes too close to a junction box (or whatever they call those blocky little green structures that dot the roadsides like military installations for midget aliens) and ZAP! Out goes the DSL, or the phone, or both. That night it was both, but the Internet came back on after a little while. The phone stayed out overnight.

Then, a few hours after the phone came back on, both lines went out again. This time it was in the middle of a clear blue sky, so go figure. After a few hours I went outside with the old “candy bar” cell phone and walked around until I could get a couple of bars of signal. My connectivity lasted an average of 90 seconds, so there was no way it could survive for an entire wait-on-hold-while-listening-to-horrible-music service call. Instead I phoned a family member and asked him to contact Big Telecom for us. He called back a few minutes later and said the company promised to send a technician out no later than 2pm the next day.

That’s actually tomorrow, as I write these words. I’m taking advantage of our down time to put the next fundraising post on virtual paper. There’s no way to tell when I’ll actually be able to publish it, though…

Actually, although we pay Big Telecom for our phone service, the local system is a relic of earlier times, a small company that was gobbled up by a big company during the merger frenzy. Until fairly recently it was like the proverbial two tin cans and a piece of string. We even had a party line in the earliest days.

Somehow they figured out a way to run DSL down that string, but the system is still sensitive to, ahem, environmental variables.

These recent events provided part of the inspiration for the title and the header photo. But I’ll have more on that later.

Well, Monday was a day to remember!

It wasn’t how we planned to start our Summer Fundraiser. Dymphna and I had blocked out some thoughts about “Resources” — the theme of the week — and we were going to put together a series of posts to entertain our readers while we attempted to pick their pockets.

But the best-laid schemes o’ mice an’ men gang aft agley. Nick Lowles and HOPE not hate (what a brilliant misnomer) had other plans for us. Suddenly we’re in The Independent and The Guardian, and the resources of GoV’s over-burdened server are groaning under the additional load as a result.

It’s too early to gauge the effect of the sudden leftist onslaught from the UK on our fundraising efforts. At least two donors mentioned that they initiated or increased their gifts under the influence of HnH, but there’s no way to know whether there were other potential benefactors who were put off by the relentless campaign against us. All I can say for sure is that the number of donations flowing in from the UK has increased.

Also of interest is this response from a German donor to my hastily scrawled thank-you note:

This seems like a good time to say that I particularly value GoV for its fine selection of bomb manuals. What’s more, my paramilitary group has been able to avoid police detection thanks in no small part to the materials on your site.

Kind regards, and may you weather any storm that comes your way.

As it happened, a storm came our way just after his email arrived. We weathered that one, and the next…

Everything that arrives in our inbox becomes grist for the mill, and the little nastygram from The Independent and HOPE not hate has definitely highlighted the “Resources” theme. Our resources, that is — not theirs. Theirs are predictable and boring — government grants, money from progressive foundations, and unlimited ideological cannon fodder employed to staff their offices.

But our resources are much more interesting. We draw on a vast reservoir of people — quite possibly representing a “silent majority” of the population — who oppose what is being done to them, their countries, and their cultures, and are willing to pitch in if they can do so without destroying their careers and their families.

They form a distributed network, which is something that HnH — and its American equivalent, the Southern Poverty Law Center — seem to have trouble understanding. Their own purpose is to control and suppress public dissent, and their operations are massively funded, with support (direct or indirect) from their governments, whose interests they so slavishly serve.

They are awash in money, and any organization that receives that level of funding must of necessity be a top-down operation. As a result, they think in hierarchical terms, and assume that their ideological opponents must also be part of a hierarchical structure — a Vast Right-Wing Conspiracy funded and directed by shadowy, wealthy, sinister sources. Zionists, the Koch Brothers, the Military-Industrial Complex, the Illuminati — take your pick.

These well-funded lefties project their own organizational structure onto their opponents in the Information War. As a result, they fail to know their enemy — a serious strategic error, and possibly a fatal one. They don’t understand how decentralized distributed networks work. They may be incapable of understanding them. They are quite simply trapped within the mind-models that have set their own brains in Progressive concrete.

The distributed network represented by that telephone switchboard is different from, say, the one in the Pentagon during the Cold War. It’s not a single central location that routes all those phone calls to their approved destinations.

It’s more like the now-vanished switchboards spread throughout all those small American towns, each with an operator who knew most of the people on the other ends of her wires, and who understood the relationships that went with them. And each town was connected to and talking to the next town, all in a vast web of distributed understanding, ready to pass the right information to the place where it was needed and wanted.

We’re one of those little switchboards, and we scrape by on what we can get in order to keep the signal flowing, connecting people who have resources with those who need them. But we have to collect a minimum of resources ourselves to do the job. That’s why I’m standing here at the banquet table, banging on the side of the tip cup with my dessert fork, hoping to get everyone’s attention.

The Counterjihad is not like HOPE not hate. There’s no foundation or government sugar daddy writing out fat checks and telling us what to do. That means no expense account for GoV, alas!

That’s the down side. But the up side is that we can be very effective, even without money. And, when the time is right — when an emergent meme catches fire — we can move like lightning and accomplish something significant.

And all the while HOPE not hate is blundering around like a lumbering dinothere struggling to send neural commands from its tiny forebrain to the second one in its hindquarters in a vain attempt to turn and flee before the slingshot stone hits it smack in the glabella.

Yesterday’s resources flowed in from the following locales:

Far Abroad: Australia, India, The Netherlands, and the UK

One last note: I forgot to mention on Day One that we tithe from our donations to Vlad Tepes, whose video work is so crucial to what we do. Vlad gets by on a shoestring, just as we do — and it’s a frayed old shoestring, just like ours. So if you have a couple of extra dimes to spare, you may want to drop by Vlad’s place and clink his resource jar, too.

5 thoughts on “How May I Direct Your Call?”