The following guest-essay by Salomon Patrushev discusses the Armenian Genocide in its historical and geopolitical context. 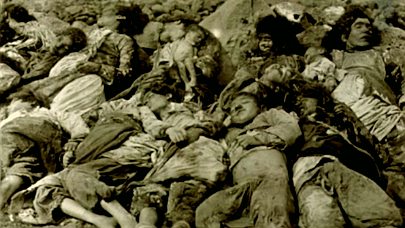 Armenian Genocide — Pan-Turkism and the Rupture of Fossilized Muslim Hate

Across the Muslim world there have been Christian minorities who despite their weakness in numbers have contributed disproportionately to the cultural, educational, technological, scientific and political advancement of their respective nations. In fact, they have existed as an economically dominant and culturally enlightened minority. This fact has always puzzled the Muslim majority, who have responded to the minority-dominant status of their Christian nationals with a healthy dose of conspiracy theories in order to reconcile the discrepancy between Islamic teachings (where their Supreme Being promises Muslims that they would dominate in every sphere of life) and reality (where the Muslims are culturally inferior, poorly educated and economically backward, thus prone to irrational extremism and cruel violence).

Islamist ideologues consider the Ottoman Caliphate as a venerable empire where Muslims dominated over Christians and other religious minorities — a fact that is partially true, considering the fact that the Ottomans’ political and military suzerainty over Christian lands of Greece, Armenia and Christian Balkans arrested economic and political developments in these lands; but nonetheless, the Armenian and Greek Christians dominated professional specialities and trade within the Turkish Empire. Of note is the Armenian dominance in all the professional fields in the Ottoman Empire (with the obvious exception of Quranic studies) — a situation which aroused incredible envy among ordinary Ottoman Turks, as it equally also alarmed the Ottoman authorities who viewed their Christian intelligentsia as having a near dangerous monopoly on critical scientific, political, cultural and economic knowledge. To remedy the situation, and to ensure that Christians were subjugated across the Ottoman Empire, the Young Turk government resorted to an Islamically sanctioned remedy — mass extermination of non-Muslim populations.

To this day, not only does the present Turkish Republic still deny that its predecessor Constitutional Empire perpetrated genocide against its Armenian minority, but it has legally criminalized — through its overly nationalistic constitution and under the penalty for insulting Turkishness — the argument that the mass extermination of the Ottoman Christian populations (Armenian, Assyrians, Greeks and Turkish Christians) constituted a form of genocide. Almost all modern Muslim nations have refused to recognize the Armenian genocide to this day.

In 1914, there were about 2,133,190 Armenians in the crumbling Ottoman Empire. In 1922, approximately 387,800 Armenians remained. Almost all politically correct historians admit that an estimated 1.7 million Armenians disappeared during World War 1, even though Imperial Ottoman records do show that its Armenian subjects were subjected to mortal beatings, rape, sanctioned executions and death marches across the desert wilderness with no provisions made for either food or water.

Historical facts show that approximately over a million Armenians succumbed to starvation, sheer exhaustion and torture, while others were executed by Ottoman death squads. The Young Turk government resourcefully and systematically deliberated on eliminating an entire Christian population from their historical lands in order to achieve the chauvinistic goals of Pan-Turkish supremacy.

Prelude to the Genocide

In the late 19th Century, the Armenians in the Ottoman Empire were concentrated mainly in Eastern Anatolia (as this has historically been part of their homeland) where they had managed to industrialize the region while maintaining their unique Christian social and religious norms largely unaltered. In Constantinople, the Armenian and Greek minority dominated the trade and professional sectors. In general, Christians (especially the Greeks and Armenians) were better off as compared to their Muslim neighbours, who were largely poorly-remunerated Ottoman functionaries and Turkish peasants.

At the start of the 20th Century, the once mighty Ottoman Empire was collapsing, as a series of revolts in the Balkans threw off the yoke of Ottoman domination over their Slavic Christian subjects, while Arab nationalism (whose engine was Arab Christian intellectuals) eroded the control of the Turks over their Middle Eastern possessions. Centuries of economic and technological stagnation and its attendant backwardness manifested itself across the empire in the form of high rates of illiteracy among the Muslim Turks, administrative inadequacy, military ineptitude, clerical absurdity and overall governmental incompetence.

In 1908, a secret society (which later became the Committee of Union and Progress [CUP]) led by a group of three young, ambitious but overtly discontented Turkish officers — the dictatorial triumvirate of the three pashas: Mehmet Talaat Pasha, Ahmed Djemal Pasha and Ismail Enver Pasha — forcefully dethroned the Caliph and seized power with the stated intention of modernizing, strengthening, and “Turkifying” the empire as well as deporting its dhimmi populations. The coup plotters were colloquially known as the Young Turk Movement.

In March 1914, the Young Turk movement plunged the Ottoman Empire into World War 1 on the side of the Central Powers as part of the Ottoman-German Alliance. Their initial war campaign was aimed at capturing the Azeri-dominated city of Baku from the Russian Empire as part of their Caucasus Campaign, and the Ottoman Third Army was tasked with this mission. The ultimate objective of the campaign was to create a continuous land mass that would link Anatolia to the Turkic lands of Central Asia, and thereby revitalize and expand the Ottoman Empire under the auspices of Pan-Turkism.

This was not to be, as the Imperial Russian Army defeated the Ottomans at Sarikemish. The Battle of Sarikemish was quite decisive as the Ottoman Caucasus campaign floundered under a Russian offensive which exposed the eastern flank of the Ottoman Empire to Russian penetration. During the battle, the Russian Caucasus Army, commanded by Nikolai Nikolaevich Yudenich, routed the Third Army from South-Eastern Caucasus as they killed over 47,000 Ottoman troops, while another 10,000 Ottoman soldiers were made invalid from the injuries that were inflicted on them by the Russians. The Russians in turn suffered approximately 30,000 dead and injured.

The Caucasus campaign was a disaster for the Turks; the Ottoman army suffered heavy material and manpower losses (over half of the Third Army was incapacitated), while losing all their Caucasian possessions to the Russian army.

The Young Turks, horrified by the disastrous nature of the Caucasus campaign began to search for scapegoats and explanations that they could use to rationalize their military defeats in the Eastern Front. After intensive deliberations between the Young Turks and the Ottoman High Command, a grand conspiracy theory was advanced to explain the military, political and economic inadequacies of the Empire — the Grand Christian Conspiracy.

In 1914, the Russian Empire was under the rule of the autocratic Tsar Nicholas II (Nikolai Alexandrovich Romanov), who was intimately tied to the Russian Orthodox Church — which recently beatified him as Saint Nicholas the Martyr. As Russia entered World War I, the church authorities implored him to liberate Constantinople from the Turkish Muslims as well as protect the Orthodox populations living outside the Russian Empire. The Turkish high command and CUP were well aware of Russian ambitions to liberate Constantinople (now Istanbul), but they were not able to figure out how the Armenian Christians (who were mainly members of the Armenian Orthodox Church and the Armenian Catholic church) fitted into the Russian-Ottoman equation.

Nonetheless, fearful that their military ineptitude and mounting losses across all the major war fronts would instigate an uprising among the Anatolian Turks, the CUP deliberated to rationalize their military defeats to the Ottoman public by offering and promoting the Grand Christian Conspiracy.

According to the conspiracy theory, the Empire’s Christian subjects were an active fifth column which assisted the Russian empire (to recreate a modern version of the old Byzantine Empire across the Ottoman lands) by backstabbing the Caliphate during its military expeditions; and as such, the Ottoman’s Christian subjects constituted a strategic and critical national security threat which could only be resolved by expelling the Christian masses (chiefly Armenians and Greeks) out of Anatolia as well as deporting other Christian communities (mainly Assyrians, Syriacs and Maronites) into the desert wilderness of the Middle East.

The Ottoman High Command and the CUP finally resolved to commit genocide against their Christian subjects in March 1914.

On 24th April 1914, under orders from Mehmet Talaat Pasha as relayed by the Ottoman high command, hundreds of Armenian intellectuals were arrested and promptly executed by Turkish troops. This marked the beginning of the systematic extermination of the Christian communities of Asia Minor. Christians were rounded up across Anatolia and deported across the Syrian Desert into concentration camps, but most of them died along the way.

The CUP also authorized the Turkish military to immediately confiscate the properties of subversive Christians who had been deported in order to put such property into the service of the Imperial Ottoman military. Abandoned Christian properties were also confiscated by the Ottoman government; while Armenians who were serving in the Ottoman Military were disarmed and promptly deployed into the labour battalions, where most of them were worked to death while the rest were executed by Ottoman death squads.

Turkish death squads executed Armenian women and children as they matched across the Syrian Desert. Hundred of thousands more died from starvation, exposure, and exhaustion. They were buried in mass graves which littered Asia Minor and the Syrian Desert. At the end of the state-authorized and -organized systematic mass slaughter, approximately 1,745,000 Armenians lay dead across the vast stretches of the Ottoman territories.

In 1918, the Ottoman Empire was decisively defeated by the Allied Powers and the chief architects of the Armenian genocide — the Three Pashas — fled Anatolia for self-exile in Germany where the three were afforded state protection. However, the Armenian Revolutionary Federation (ARF) launched Operation Nemesis to hunt their former persecutors — mainly Azeri (Azerbaijani) and Turkish officials as well as Armenian traitors who denounced their compatriots to the Ottoman mass murderers. Operation Nemesis would exact revenge on the individuals mentioned hereafter.

Lessons for the Occident

As the Armenian genocide shows, Islamists always harbour a concealed hatred for Christian civilization and the dominance of Christianity over Islam; and, if given a chance, they will replicate what the Ottomans did to the Armenians, Greeks and Assyrians during the course of World War 1. The Islamist peril is currently enveloping Europe while jihadists convert Syria into a graveyard for the Christian minority. As Nester once warned, Islamists are inciting Christians to violence even though they (Islamists) may not survive the outcome.

Salomon Patrushev is a bibliophilic lover of Classical, Renaissance, Enlightenment and Modern Western Philosophy as well as a loyal devotee to the American ideals including Tolerance, Hard Work, and Eternal Progress as rooted in the Judeo-Christian traditions. He is currently a freelance (paid) guest blogger at Strategic Intelligence Files. The opinions expressed in this piece are STRICTLY his own.