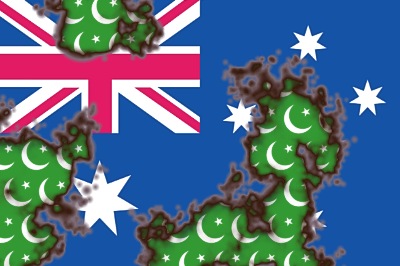 An Australian reader emailed us last night with the following message:

I thought you might be interested in an article written by a female Muslim captain in the Royal Australian Navy. It appeared in the June 2015 issue of the Royal United Services Institute Journal of New South Wales Incorporated (scroll down to : “Islam in Australia in 2015: an Australian Muslim perspective – Mona Shindy”).

Together with some other ex-military men I had asked to meet with our Assistant Minister for Defence (Stuart Robert MP). Mr Robert has yet to respond, but at the meeting we intended putting forward our objections to Muslims in the Australian Defence Forces (ADF) and their growing influence in Australia. Our request followed Mr Robert’s announcement he wanted to see more Muslims in the ADF, and his recent appointment of a Muslim imam as an advisor to the ADF.

When I first read the article I found so many lies and distortions in it I thought it was a practical joke. However, it is not. Google confirms Captain Shindy does exist, while also confirming the genuineness of the article.

That such a well-known journal would publish this nonsense is inexplicable.

The article is available in PDF format: “Islam in Australia in 2015: an Australian Muslim perspective”.

As it happens, Mona Shindy is the most senior Muslim in the Royal Australian Navy. Her article is a mixture of routine Islamic dishonesty and progressive multi-culti boilerplate of a sort to make the reader’s eyes glaze over after the first three sentences. The introduction to her paper will give you the flavor:

Islam is a religion based on submission to the will and laws of God, under which a woman is equal to a man and the killing of innocent people is a sin. Terrorism, an abhorrent act, has nothing to do with Islam. A ‘victim mentality’ evident in Australian Islamic society is fodder for terrorist recruiters. Breaking the terrorist cycle must involve communication, education and equity.

It seems uncharitable to take exception to this young woman’s words. She may very well believe the soothing bromides she cobbled together to form her article. Or she may be engaging in taqiyya and kitman (lying and misdirection to achieve sacred ends); there’s no way for us to tell. But in either case, her statements and explanations are straight out of the Muslim Brotherhood playbook. They make essentially the same points as does the oily oratory of Tariq Ramadan or the rhetoric of Imam Faisal Rauf.

The following paragraph is from the section on “Islam and Muslims”:

Islam teaches that the killing of innocent people is a sin. Why then have Muslims been linked to terrorism? Terrorism is an unjustifiable, abhorrent act that has nothing to do with Islam. The extremist behaviour of groups purporting to be Muslims has been overplayed by the media for years constantly linking terrorist behaviours to Islam, e.g. use of the description ‘Islamist’, rather than separatist or militant. Of course, such groups claiming authority for their actions under a banner of ‘Islam’ has not helped, but it is not legitimate to associate the politically-driven behaviours of unsavoury individuals or groups with the teachings of a religion they claim to follow. Extremist groups have emanated from many religious communities over the years. Well-known examples include many of the atrocities in World Wars I and II, such as Hitler and the extermination of the Jews; and the longstanding conflict between Catholics and Protestants in Ireland. [emphasis added]

So what “sacred misdirection” may be found in the assertion that “the killing of innocent people is a sin”?

In order to answer that question we need to take a little side-journey into the niceties of Islamic law. As Reliance of the Traveller — the foremost authoritative source on Sunni Islamic law — reminds us (§r10.3), under sharia, “giving a misleading impression” is an acceptable practice:

Scholars say that there is no harm in giving a misleading impression if required by an interest countenanced by Sacred Law.

Now we need to understand the definitions of certain words as understood by Islamic law. Muslims who are well-versed in sharia do not mean the same thing we do when they use the word “innocent”. They know our definition is different from theirs, and they are content to mislead us, because our misunderstanding of their meaning advances an interest countenanced by Sacred Law.

So what do believing Muslims mean when they say “innocent”?

According to the tenets of Islamic law, the world is divided into two houses: Dar al-Islam, or “the House of Submission”, and Dar al-Harb, or the “House of War”. The former comprises all the territory whose inhabitants have submitted to Allah. Dar al-Islam is the only possible zone in which there can be peace. The rest of the world — the portion governed by infidels — is considered to be permanently at war with all Muslims.

Islam defines “noncombatants” as “innocent Muslims” — that is, those believers who have not transgressed against the laws of Allah. No one else can be considered “innocent” under Islamic law.

The infidel’s status is harbi, “enemy”, because he comes from the territory of war. Therefore, according to the inexorable logic of the relevant Koranic verses — the uncreated word of Allah — there is no such thing as a noncombatant infidel. All non-Muslims in Dar al-Harb are enemies, and the believer may and should strike terror into their hearts and kill them when necessary.

Therefore, when Capt. Shindy refers to “innocent” people, she is not including any Australian people except those who have already submitted to Allah and accepted the Islamic faith. All others are considered enemies, and may be killed when it is expedient to do so if they refuse to convert to Islam.

In the next portion of that paragraph, Mona Shindy implicitly invokes Islamic law concerning blasphemy, insisting that terrorists not be described using any terms derived from “Islam”. This is because calling them “Islamic terrorists” would reflect badly on Islam, and thus violate Islamic law, which forbids defaming Islam in any manner, and which is to be applied to both Muslims and non-Muslims.

Now, if those who heard Capt. Shindy’s words or read her paper were rational beings capable of independent thought, they would say something like this:

Captain Shindy, you describe yourself as a Muslim. The terrorists who blow up schools and behead captives also call themselves Muslims. How am I to decide which of you is telling the truth? Perhaps you are a Muslim, and they are not. Perhaps the reverse is true. Or, perhaps all of you are Muslims, but you are not telling the truth about the terrorists.

How am I to resolve this conundrum? Must I simply take your word for it?

Alas, no such reasonable enquiries will take place. Her audience is not made up of rational beings capable of independent thought, especially those who have risen into the higher ranks of the armed forces. Their minds have been crippled by decades of politically correct multicultural indoctrination. They will simply accept the superficial feel-good meaning of her words, and any embedded lapses in logic will go unquestioned.

The rest of the paragraph employs standard Alinskyite misdirection, bringing up the venerable red herrings of Hitler and Northern Ireland to divert our attention from the violence of Islam. If she had been more thorough, she would have included Timothy McVeigh and Anders Behring Breivik in her list of terrorists from “many religious communities”.

Once again, if her audience were alert and amenable to logic, they would ask her about the relative proportion of such “other” terrorists, when compared with the tens of thousands of Islamic terrorists who have engaged in murderous activities — and those just in the fourteen years since 9-11.

There is much more that can be gleaned from Capt. Shindy’s paper, but it would take too long and use up too much space to plumb it at greater depth. Let’s just take a look at these excerpts from her conclusion:

In the present era, we need strong government and community leaders who are more strategic in their approach to Muslims; and who focus strongly on peacemaking and promoting social cohesion. They need to implement strategies that adequately support the needs of all citizens and that celebrate the contribution of all as part of the ‘Australian identity’.

Mainstream Muslims need to be supported and protected. The promulgation of negative views of Muslims increases prejudice, fear and uncertainty. This can lead to disadvantage, including reduced employment prospects, vilification and victimisation; and these provide ammunition for terrorist recruiters.

In short, real change can and must occur in Australia’s relations with its Muslim citizens. It will need strong leadership, a change in the dialogue, better exploration of grievances and community challenges, and implementation of a national education programme promoting understanding and inclusion.

Notice that any improvement in relations between “communities” depends upon the attitude and behavior of non-Muslims, and not upon Muslims. This is the standard Islamic line that depicts Muslims as perennial victims, and non-Muslims as their unfair persecutors. Nothing about Islam ever causes any problems; only misunderstanding or bigotry on the part of non-Muslims creates inter-community frictions.

Tellingly, there is also an implied threat of violence in this conclusion: Any violence that occurs is a result of your failure to submit to the requirements of Muslims. If only you were to act properly towards Muslims, there would be no more violence on the part of those who call themselves “Muslims”, but aren’t really.

These conclusions are inherent in everything that Mona Shindy says, but don’t expect her Australian audience to discern them. The Muslim Brotherhood has been notably successful at undermining the Western capacity to think and reason clearly, to the point where such conclusions are simply unthinkable.

The Australian military, like its counterparts in all other Western countries, has invited a self-acknowledged enemy inside the fortress and given it the keys to the armory. It has voluntarily admitted these potential destroyers into its ranks, and is utterly oblivious to what it has done.

38 thoughts on “The Keys to the Armory”