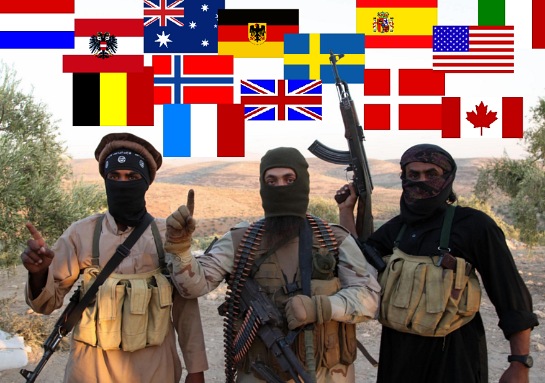 Just about every day there are stories in the MSM about “Swedes”, “Norwegians”, “Danes”, “Germans”, “Britons”, “Australians”, etc. traveling to Syria to join the Islamic State and fight in the jihad. Except that the media articles don’t put the quote marks in — they’re willing let their audience think these are just ordinary Svens and Heinrichs who inexplicably decide to grow beards, sell all their worldly goods, and smuggle themselves into Syria.

Here’s the latest bit of news, in this case about a young lady who tried to get to Syria to become a Bride of Jihad. Once again, there’s nothing in the Sveriges Radio account to lead you to conclude it was anything but a blond-haired Ingrid who tried to sneak across the Turkish border. Or maybe a red-haired pigtailed Pippi Longstocking:

Swedish Teen Girl Tried to Join IS in Syria

A 15-year-old girl embarked on a trip to Syria earlier this spring, intending to join terrorist organisation IS, but she was apprehended in Turkey and is now back in her hometown of Örebro in central Sweden.

When the girl’s parents found out that she had run away from home to join IS in Syria, they contacted the police and that led to the Turkish authorities intervening.

Three other Örebro residents have also attempted to travel to Syria to join IS, and have been deported by Turkish authorities twice. While the teen girl is back in Örebro, the other three individuals may have entered Syria via Jordan, according to unconfirmed information attained by Swedish Radio’s P4 Örebro station. They are a woman in her twenties who is married to an Örebro resident fighting for IS in Syria plus two men — one of whom has several brothers who have already been to Syria. One of the brothers was killed in Syria and another was convicted on Monday in Örebro for physically assaulting his sister.

The thing is, some of these “Swedes” really are Swedish converts — the Islamic State is attractive to bloody-minded psychopaths, offering them the opportunity to act on their deepest impulses under a divine seal of approval.

So these are my questions for our European readers:

Personal impressions are fine, but I’d like to see hard data on the topic, if any can be found. European governments lie and dissemble and hide real statistics to try to prevent their citizens from becoming alarmed, but there must be some real information out there somewhere.

How many of those mujahideen traveling to Syria are Mohammeds and Ahmads and Abdullahs? And how many are Henriks and Nigels and Joachims?

20 thoughts on “When “Swedes” Join the Jihad”